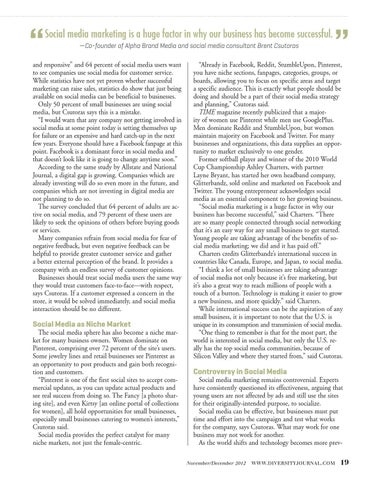 Social media marketing is a huge factor in why our business has become successful. —Co-founder of Alpha Brand Media and social media consultant Brent Csutoras

and responsive” and 64 percent of social media users want to see companies use social media for customer service. While statistics have not yet proven whether successful marketing can raise sales, statistics do show that just being available on social media can be beneficial to businesses. Only 50 percent of small businesses are using social media, but Csutoras says this is a mistake. “I would warn that any company not getting involved in social media at some point today is setting themselves up for failure or an expensive and hard catch-up in the next few years. Everyone should have a Facebook fanpage at this point. Facebook is a dominant force in social media and that doesn’t look like it is going to change anytime soon.” According to the same study by Allstate and National Journal, a digital gap is growing. Companies which are already investing will do so even more in the future, and companies which are not investing in digital media are not planning to do so. The survey concluded that 64 percent of adults are active on social media, and 79 percent of these users are likely to seek the opinions of others before buying goods or services. Many companies refrain from social media for fear of negative feedback, but even negative feedback can be helpful to provide greater customer service and gather a better external perception of the brand. It provides a company with an endless survey of customer opinions. Businesses should treat social media users the same way they would treat customers face-to-face—with respect, says Csutoras. If a customer expressed a concern in the store, it would be solved immediately, and social media interaction should be no different.

The social media sphere has also become a niche market for many business owners. Women dominate on Pinterest, comprising over 72 percent of the site’s users. Some jewelry lines and retail businesses see Pinterest as an opportunity to post products and gain both recognition and customers. “Pinterest is one of the first social sites to accept commercial updates, as you can update actual products and see real success from doing so. The Fancy [a photo sharing site], and even Kirtsy [an online portal of collections for women], all hold opportunities for small businesses, especially small businesses catering to women’s interests,” Csutoras said. Social media provides the perfect catalyst for many niche markets, not just the female-centric.

“Already in Facebook, Reddit, StumbleUpon, Pinterest, you have niche sections, fanpages, categories, groups, or boards, allowing you to focus on specific areas and target a specific audience. This is exactly what people should be doing and should be a part of their social media strategy and planning,” Csutoras said. TIME magazine recently publicized that a majority of women use Pinterest while men use GooglePlus. Men dominate Reddit and StumbleUpon, but women maintain majority on Facebook and Twitter. For many businesses and organizations, this data supplies an opportunity to market exclusively to one gender. Former softball player and winner of the 2010 World Cup Championship Ashley Charters, with partner Layne Bryant, has started her own headband company, Glitterbandz, sold online and marketed on Facebook and Twitter. The young entrepreneur acknowledges social media as an essential component to her growing business. “Social media marketing is a huge factor in why our business has become successful,” said Charters. “There are so many people connected through social networking that it’s an easy way for any small business to get started. Young people are taking advantage of the benefits of social media marketing; we did and it has paid off.” Charters credits Glitterbandz’s international success in countries like Canada, Europe, and Japan, to social media. “I think a lot of small businesses are taking advantage of social media not only because it’s free marketing, but it’s also a great way to reach millions of people with a touch of a button. Technology is making it easier to grow a new business, and more quickly.” said Charters. While international success can be the aspiration of any small business, it is important to note that the U.S. is unique in its consumption and transmission of social media. “One thing to remember is that for the most part, the world is interested in social media, but only the U.S. really has the top social media communities, because of Silicon Valley and where they started from,” said Csutoras.

Social media marketing remains controversial. Experts have consistently questioned its effectiveness, arguing that young users are not affected by ads and still use the sites for their originally-intended purpose, to socialize. Social media can be effective, but businesses must put time and effort into the campaign and test what works for the company, says Csutoras. What may work for one business may not work for another. As the world shifts and technology becomes more prevNovember/December 2012 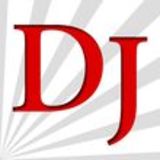