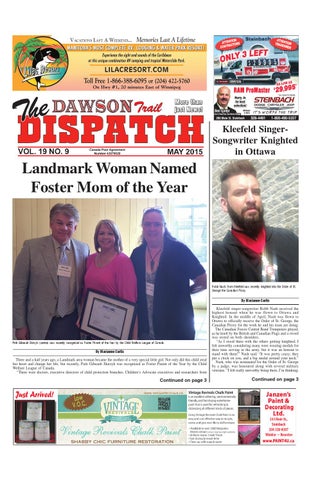 Robb Nash, from Kleefeld was recently knighted into the Order of St. George the Canadian Priory.

Three and a half years ago, a Landmark area woman became the mother of a very special little girl. Not only did this child steal her heart and change her life, but recently, Patti Gibeault Skirzyk was recognized as Foster Parent of the Year by the Child Welfare League of Canada. “There were doctors, executive directors of child protection branches, Children’s Advocate executives and researchers from

Kleefeld singer-songwriter Robb Nash received the highest honour when he was flown to Ottawa and Knighted. In the middle of April, Nash was flown to Ottawa to officially receive the Order of St. George, the Canadian Priory for the work he and his team are doing. The Canadian Forces Central Band Trumpeters played, as he knelt by the British and Canadian Flags and a sword was rested on both shoulders. “As I stood there with the others getting knighted, I felt unworthy considering many were wearing medals for their time serving in the army, but it was an honour to stand with them!” Nash said. “It was pretty crazy; they put a clock on you, and a big medal around your neck.” Nash, who was nominated for the Order of St. George by a judge, was honoured along with several military veterans. “I felt really unworthy being there, I’m thinking,

Patti Gibeault Skirzyk (centre) was recently recognized as Foster Parent of the Year by the Child Welfare League of Canada.