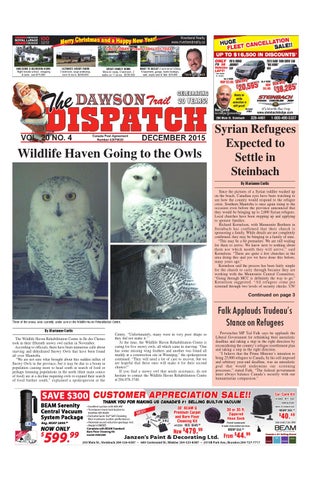 Wildlife Haven Going to the Owls

Syrian Refugees Expected to Settle in Steinbach By Marianne Curtis Since the pictures of a Syrian toddler washed up on the beach, Canadian eyes have been watching to see how the country would respond to the refugee crisis. Southern Manitoba is once again rising to the occasion even before the province announced that they would be bringing up to 2,000 Syrian refugees. Local churches have been stepping up and applying to sponsor families. Richard Kornelson, with Mennonite Brethren in Steinbach has confirmed that their church is sponsoring a family. While details are not completely confirmed, they may be bringing in a family of nine. “This may be a bit premature. We are still waiting for them to arrive. We know next to nothing about them nor which month they will arrive,” said Kornelson. “There are quite a few churches in the area doing this and yes we have done this before, many years ago.” Kornelson said the process has been fairly simple for the church to carry through because they are working with the Mennonite Central Committee. “Going through MCC is definitely the way to go,” Kornelson suggested. “All refugees come pre screened through two levels of security checks. UN/

Three of the snowy owls currently under care at the Wildlife Haven Rehabilitation Centre.

By Marianne Curtis The Wildlife Haven Rehabilitation Centre in Ile des Chenes took in their fifteenth snowy owl earlier in November. According to officials, there have been numerous calls about starving and dehydrated Snowy Owls that have been found all over Manitoba. “We are not sure what brought about this sudden influx of Snowy Owls in the province, but it may be due to a boom in population causing more to head south in search of food or perhaps lemming populations in the north (their main source of food) are at a decline requiring owls to expand their search of food further south,” explained a spokesperson at the

Centre. “Unfortunately, many were in very poor shape so they did not make it.” At the time, the Wildlife Haven Rehabilitation Center is caring for five snowy owls, all which came in starving. “One has some missing wing feathers and another was found all muddy at a construction site in Winnipeg,” the spokesperson continued. “They will need a lot of care to recover, but we are hopeful that these ones will make it for their second chance!” If you find a snowy owl that needs assistance, do not hesitate to contact the Wildlife Haven Rehabilitation Centre at 204-878-3740.

Falk Applauds Trudeau’s Stance on Refugees Provencher MP Ted Falk says he applauds the Liberal Government for rethinking their unrealistic deadline and taking a step in the right direction by reconsidering the country’s refugee resettlement plan and taking a step in the right direction. “I believe that the Prime Minister’s intention to bring 25,000 refugees to Canada, by his self-imposed and arbitrary year-end deadline, was an unrealistic goal that would undermine our screening processes,” stated Falk. “The federal government must always balance Canada’s security with our humanitarian compassion.”