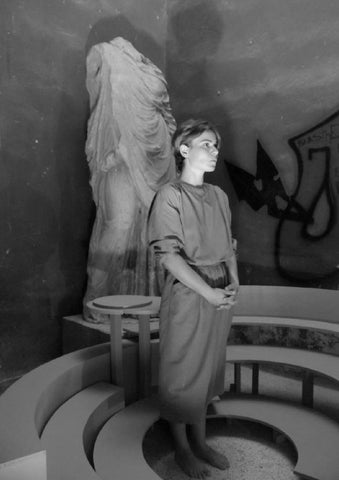 The proposed participatory platform is a multifunctional wooden auditorium, which evokes the ancient Greek Amphitheatre. Its human dimensions (basic diameter 180), following Le Corbusierâ&#x20AC;&#x2122;s modular or the Vitruvian Man of Leonardo da Vinci -where the man has a superimposed position with his arms and legs apart- promote the humanist moderation and the anthropocentric character of Greek Democracy in a critical time when Democratic principals have been reduced. The flexible structure of this symbolic domestic amphitheatre makes the installation easily portable and available for indoor or outdoorperipatetic lectures, performances, workshops and other events and activities. Its form and diameter could be also extended by affixing additional semicircular wooden elements or accordingly be diminished by their removal, keeping just the essential construction (photo below). The H.S.T. was conceived and designed by the artist Nicos Charalambidis for the activities of his artistsâ&#x20AC;&#x2122; collective (The Arab Guggenheim Museum) during the Athens Olympics in 2004. Since then it has been an instrument appearing in different versions/forms, serving a variety of projects/artists.

Antoinette’s canopy bed: In 2006 a gym bed with guillotine was incorporated in one of the amphitheatre’s versions as a sarcastic reference to Maria Antoinette- a historic personage connected with peoples’ struggle for Democracy. The curtains of her royal canopy were replaced here by blenches minimizing the bed’s surface and giving to the audience the opportunity to watch her last nightmares before her decapitation. The Freudian character of the construction was reinforced by the collaboration of Charalambidis with Dr. Ioannis Nestoros, Professor in clinical psychology at the University of Crete and his associate Dr. Peter J. Hawkins president of the European Institute of Integrative Psychotherapy, as well as professor in hypnosis and psychotherapy at ISMAI in Portugal. Since 2008, Dr. Nestoros became the president of the Holllow Airport museum while his Hypnotherapy sessions and Neurofeedback training have been included in the project’s educational programmes as courses of ‘’Mental Gymnastics’’.

Images of the “Human Sized Theatre” in versions of more expanded dimensions.

The amphitheatreâ&#x20AC;&#x2122;s semicircular components could be easily transported for outdoor events.

A manual with practical instructions for everyone is also in disposal for everyone to construct their own domestic theatre promoting the idea of its integration in daily life.

Another one allegoric platform of the “Exercises on Democracy” series. The wooden grandstand of the construction is coated with wheat inviting the pigeons, to gather only on the grandstand’s seats in the surprise of the passing by people.

Wood-stove The woodstove is part of the heating equipment series of the school, made from barrels originated from Nicosia’s Buffer-Zone barricades. At the barrel mouth, a model of the Amphitheater, the auditorium of the School, rotates in a perpetual circular motion. In do ing so, the amphitheater drags with it -as an integral piece- the model of the artist’s house, indicating both the public participatory character of the project, as well as its private -di mension related to the artist’s per sonal experiences; the experience of being a refugee and the loss of the ancestral house. The amphitheatre’s heated model has been designed, to assist also in the preparation of tea, coffee or even food, while in the ad jacent auxiliary house model coffee, sugar; salt, herbs, etc. may be stored. 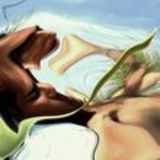