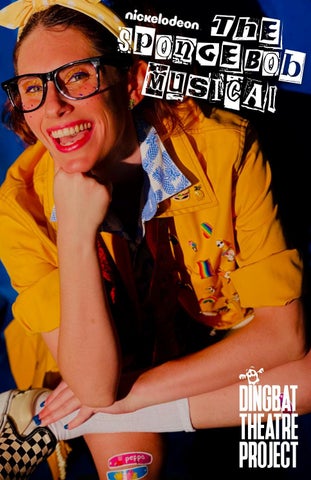 “When the Going Gets Tough” BY T.I.

“(Just a) Simple Sponge” BY PANIC! AT THE DISCO

“Tomorrow Is” BY THE FLAMING LIPS

A NOTE FROM DINGBAT.

Thank you so much for joining us under the sea for the professional regional premiere of The SpongeBob Musical. Whether positive or negative, everyone has a relationship of some sort with this eternally optimistic sponge who lives in a pineapple under the sea. I, like many others, was skeptical when The SpongeBob Musical was first announced, but the ebullient music, energetic characters, and off-the-wall creativity won me over like it did so many others when it was nominated for twelve Tony Awards in 2018. When approaching a piece of theatre, the artists involved have to question why the story needs to be told. What from The SpongeBob Musical could possibly resonate with audiences. After a turbulent two years (almost), being positive and optimistic can be difficult. Being excited about what each new day brings can become a chore. However, the character of SpongeBob SquarePants embodies these qualities and more in a healthy way. He wakes up every morning with a smile on his face ready to tackle the day, because today is going to be the best day ever. As you journey to Bikini Bottom with us, keep in mind the themes of community, friendship, hard work, going against the grain, being yourself, and endless optimism. We can all take something away from how SpongeBob sees the world. Thank you for a wonderful first year of Dingbat wackiness. Enjoy the show! Dingbat Theatre Project

A THANK YOU TO OUR SUPPORTERS.

THE SUNCOAST’S QUIRKY THEATRE COMPANY Dingbat Theatre Project, founded in 2020, is a collective of theatre artists dedicated to the creation and development of dynamic and boldly imaginative theatrical productions. Dingbat’s belief is that great storytelling and, by extension, theatre comes from imagination and a desire to play. Each production Dingbat Theatre Project brings to the stage, from newly imagined classics to original pieces, will reflect this urge to engage in theatre in a creative and surprising way.

N O E L I A A LTA M I R A N O ( S a n d y Cheeks) is excited to be working again with the Dingbat Theatre Project crew. She was last seen in their production of Shrek the Musical as Mama Bear and various other characters. Past productions she’s been a part of include: SHOUT! The Mod Musical, The Marvelous Wonderettes, Smokey Joe’s Cafe, and Beehive.

KILEY BERKERY (Pearl Krabs) is a junior at Venice High School and has been performing since the age of seven. Some of her favorite shows include John and Jen and Godspell. Though theatre has always been her passion, Kiley is also very active in school including her involvement in national honors society chorus, and Tri-M music honors society. She is so thankful for all of the support she has received both in school and theatre. This cast has truly been one of the most loving, talented, and funny groups of people, an Kiley is so grateful to be a part of their team! “Thank you family, Luke, Brian, and all involved in making this amazing production!” HUNTER DAY (Sheldon J. Plankton) is the middle school theatre teacher at Sarasota School of Arts and Sciences and is also a dance instructor at Reflex Arts Dance. He has appeared onstage in West Side Story at MPAC and Head Over Heels at The Players Centre.

BRIAN F. FINNERTY (Director/ Choreography/Designer | Mr. Eugene Krabs/Electric Skate) has directed, choreographed, and performed in many successful productions throughout Sarasota County. Brian was a competition dancer until the age of seventeen, when he shifted his obsession toward musical theatre. After attending Booker High’s VPA program and dropping out of Point Park University’s Conservatory for Performaning Arts, Brian has proceeded to direct and/or choreograph: YANK! A WWII Love Story, Silence: the Musical, Reefer Madness, SHOUT! The Mod Musical, All Shook Up, Hello, Dolly!, the area premiere of Head Over Heels, Shrek the Musical, and, most recently, Hedwig and the Angry Inch with Dingbat, where he acts as Co-Artistic Director and Social Media Manager. Brian has been seen onstage at Westcoast Black Theatre Troupe, Arundel Barn Playhouse, and with Plump Sisters Productions. He works at The Players Centre &amp; Studio as an instructor and Production Manager. AMANDA HEISEY (Squidward Q. Tentacles) is thrilled to play a beloved cartoon character (she loves cartoons) and to be working with her favorite people (they’re all really good people). Favorite credits include: Hedwig and the Angry Inch (Yitzhak), Shrek the Musical (Pinocchio), Cat on a Hot Tin Roof (Maggie), The Rocky Horror Show (Magenta), Cats (Demeter), and Blood Brothers (Linda)&lt; Directorial credits include: The Legend of Sleepy Hollow, Yard Sale the Musical, and The Players Teens at The Players […]

[cont.] Studio. “Thank you to Dingbat for letting me be the dingbat everyone always knew I am. Love to everyone involved, to Lukey Poo, but most of the love to my FIANCÉ Mr. Krabs. We sure do make a pair &lt;3” AUSTIN HOWETH (Mrs. Puff / Old Man Jenkins/French Narrator) is an actor and educator here in Sarasota, and is so excited to be working with Dingbat Theatre Project! Austin graduated from Mississippi State University with a degree in Communications with a concentration in Theatre. IN 2018, Austin moved to Sarasota as an intern at Florida Studio Theatre, where he taught classes as well as performed in their children’s theatre shows both in house and on tour. A few his favorite things he has done are Noises Off! (Sheldon), Peter Pan (Michael), Pinocchio (Geppetto), The Crucible (Giles Corey), and Florida Studio Theatre’s Write-a-Play tour. L U K E M A N U A L M c FAT R I C H (Director/Designer | Patrick Star/ Electric Skate) is so thrilled to be back with another with Dingbat, where acts as the Producing Artistic Director. He also is the Digital Development Associate and an instructor at Venice Theatre. Born and raise in Little Rock, AR, Luke mysteriously found himself here on the Suncoast after graduating from Mississippi State University where he studied Marketing and Theatre. His directing credits include The Great American Trailer Park Musical, Shrek the Musical, The Brothers Grimm Spectaculathon with Keirston Murphy, The Elves and the Shoemaker, The Gift of the Magi, and A S e u s s i fi e d C h r i s t m a s C a r o l . Onstage, Luke has appeared in Hedwig and the Angry Inch, Shrek the Musical, Brian &amp; Luke’s Live Holiday Jamboree, Head Over Heels, Peter and the Starcatcher, The Drowsy Chaperon, Urinetown, and a […]

[cont.] one-man production of The Call of the WIld, which he adapted from the Jack London novel. JAMIE MOLINA (SpongeBob SquarePants) is a Texas native who graduated from Emerson College with a BFA in Musical Theatre. Since then, she has performed for Cedar Point, Florida Studio Theatre, Dingbat Theatre Project, Selby Gardens, Gulf Coast Symphony, The Players Centre, Stages Productions, and Suncoast Dinner Theatre. She also is a film and commercial actor who is represented by Level Talent Group. Recently, she shot commercials for Cosy House Collection &amp; Universal Studios’ Halloween Horror Nights. Apart from purely performing, she enjoys long distance running, singing karaoke in the car, and playing with her cats also comprise her free time. Much love to her family, her cast, and Dyl. ZOE SMITH (Karen the Computer) is a sophomore Musical Theatre BFA Major at Eckerd College. Some past roles include Minnie Fay in Hello, Dolly!, Fastrada in Pippin, and Heather McNamara in Heathers. She would love to thank her mom for continuously being unapologetically supportive of her dreams. She is dedicating this performance to her Dad (even though he never let her watch SpongeBob as a kid!!). He was the person who taught her to work hard and dream big. JAVISHA STRONG (Mayor of Bikini Bottom/Gary) is over the moon excited to share the stage with these talented humans! She was previously seen in Dingbat’s production of Shrek the Musical and PCPA’s Sister Act as Deloris. She would like to thank Dingbat for the wonderful opportunities that they have provided!

CORY WOOMERT (Patchy the Pirate/ Perch Perkins/Electric Skate) is super excited to be back with the Dingbats after playing Shrek in Shrek the Musical and designing the wigs for Hedwig and the Angry Inch. He has also appeared as Charlemagne in Pippin, Cosme in Souvenir, Trunchbull in Matilda, Mr. Banks in Mary Poppins, and Black Stache in Peter and the Starcatcher. Love to Darah, Judah, and Asher. GRETCHEN BEAUMIER (Production Stage Manager/Lighting Design/ Technical Director) has a broad range of theatrical experience, from improvisation and directing, to stage management and technical theatre. She has worked at Venice Theatre as the Lead Office Administrator for the Education and Community Engagement Department and as a Technical Theatre Generalist. She recently graduated from UNC Greensboro in Spring of 2021 and is excited to be returning to Venice yearround. RACHEL KNOWLES (Scenic Design/ Painting) is beyond excited to be involved with another Dingbat show after designing the makeup for Hedwig and the Angry Inch.

MICHELLE KASANOFSKY (Music Director) has been playing piano for almost 56 years and is a professional musician as well as music educator. Michelle received a scholarship to Berklee College of Music in Boston and studied jazz piano there as well as studying classical piano at Boston Conservatory. Michelle is originally from New York and spent most of her life on Long island. While in New York, s h e m u s i c d i r e c t e d m a n y o ff Broadway productions which included Always… Patsy Cline and performed all over the world in Europe, Japan, and Korea. Since moving down to Florida in 1998, Michelle has taught chorus, drama, and dual enrollment music classes for close to 30 years. In 2014, she was selected as Charlotte County’s Teacher of the Year. Her and her husband, Neil, have a blended family of 6 children, 7 grandchildren, a dog, and a cat. Since 2000, Michelle has performed and music directed at Venice Theatre. Her productions have included Ben Vereen’s Hair, Mamma Mia!, Cabaret, The Toxic Avenger, and Dreamgirls to name a few. She has also music directed at The Players Centre, Manatee Players, and Charlotte Players. Michelle has played for Broadway touring companies at venues such as Barbara B. Mann and Ruth Eckerd Hall for shows including A Chorus Line, Legally Blonde, and West Side Story as well as accompanying artists such as Bernadette Peters and The Irish Tenors. In 2021, Michelle became the resident music director at Venice Theatre. But, above all, she loves music directing for the Dingbats! Having music directed and played for Brian &amp; Luke’s Live Holiday Jamboree and Shrek the Musical (where she also played Fairy Godmother).