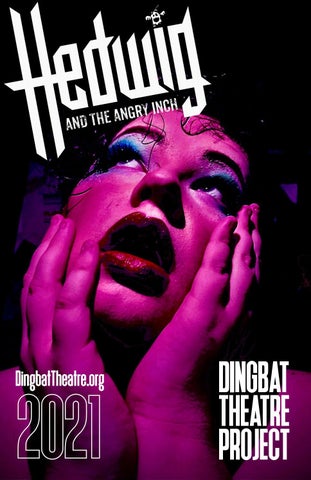 Music and Lyrics by

“TEAR ME DOWN” “THE ORIGIN OF LOVE”

A NOTE FROM THE DIRECTOR.

Hedwig and the Angry Inch premiered Off-Broadway at the Jane Street Theatre with John Cameron Mitchell and Miriam Shore on February 14, 1998 (Thanks Cupid). It later appeared in 2014 on the set of Broadway’s Hurt Locker: The Musical with Doogie Howser, Elder Price, that rent collectin’ Benny, Dexter, and Kinky Boots’ Nicola - and look, now you’re here at The Bazaar on Apricot and Lime, seeing this timeless production in 2021, amidst a global pandemic. How punk rock is that? (Keep your mask, masks are like soooo punk rock) But, honestly, we appreciate you making this work. Theatre is important and we should be here safely. Between a plethora of face-melting tune-age, Hedwig and the Angry Inch tells the story of a young boy from East Berlin, named Hansel, who left something behind for the chance at a better life. Hedwig and the Angry Inch goes far beyond a comedic glam rock concert. The central theme of the story is acceptance. We all want to feel complete. We all want success and to be loved. At this point, Hedwig would settle for any one of those three. Don’t get me wrong, the show is fun. Just allow yourself to listen between the laughter, this story’s really special. I hope you leave tonight with an open mind and open heart. Dispose of judgment on things you could learn more about. Listen to people you aren’t familiar with, who have backgrounds that you haven’t experienced. People are people. Everyone has a story. And some, like this, happen to be a very entertaining rock concert. Enjoy! These guys are amazing and I couldn’t be more grateful for this collaboration. This will be really loud. But in a good way. “GO!”

A THANK YOU TO OUR SUPPORTERS.

THE SUNCOAST’S QUIRKY THEATRE COMPANY Dingbat Theatre Project, founded in 2020, is a collective of theatre artists dedicated to the creation and development of dynamic and boldly imaginative theatrical productions. Dingbat’s belief is that great storytelling and, by extension, theatre comes from imagination and a desire to play. Each production Dingbat Theatre Project brings to the stage, from newly imagined classics to original pieces, will reflect this urge to engage in theatre in a creative and surprising way.

LUKE MANUAL MCFATRICH (Hedwig/ Tommy Gnosis) is so thrilled to be back onstage at The Bazaar in this role of a lifetime. He is a staff member and instructor at Venice Theatre by day, where he directs their teen improv troupe. In addition to performing, Luke is the founder and Producing Artistic Director of Dingbat Theatre Project. He had the opportunity to direct Shrek the Musical for Dingbat in May, and is looking forward to directing The Great American Trailer Park Musical this October at Venice Theatre and The SpongeBob Musical alongside Brian this December with Dingbat. Onstage, Luke has appeared in Shrek the Musical, Brian and Luke’s Live Holiday Jamboree, Head Over Heels, Peter and t h e S t a r c a t c h e r, T h e D r o w s y Chaperone, Urinetown, and a singleactor production of The Call of the Wild, which he adapted from the Jack London novel. “Major shoutouts to my family, Michelle for being wonderful, Brian for being the other head of the two-headed monster that is Dingbat, Mandy for being a wonderful husband, this wonderful design team (including my Carol-cohort Ms. Sophia), my friends at Venice Theatre, and you for supporting us Dingbats.” AMANDA HEISEY (Yitzhak) is lucky to put theatre together with her closest friends. Playing this role has been challenging and rewarding, and she is honored to be part of telling this story. Amanda is Marketing Director for The Players Centre and acting teacher/ director of The Players Teens for The Players Studio. Directing Credits include: The Legend of Sleepy Hollow and Hello, Dolly! at The Players Centre and Yard Sale the Musical at Venice Theatre. Favorite onstage credits include: Shrek (Pinocchio), Sylvia (Sylvia), The Rocky Horror Show (Magenta), Cat on a Hot Tin Roof (Maggie), Cats (Demeter), and SHOUT! (Green Girl). “Thank you to Luke for trusting me to support him through this show. [cont.]

Michelle, Jasmine, Cory, Ethan, Rachel, Sophia (thanks for letting me play). Love to my parents, the very talented director/ choreographer/costumer/set designer who is also very handsome, and our three furry children.” B R I A N F. F I N N E R T Y ( D i r e c t o r / Choreographer/Scenic &amp; Costume Design) has directed, choreographed, and performed in many successful (and not so successful) productions throughout the country! Brian was a competition dancer until the age of 16, where he shifted his obsession toward musical theatre. After attending Booker High’s VPA program and dropping out of Point Park University’s Conservatory of Performing Arts, Brian has proceeded to direct and/or choreograph YANK! A WWII Love Story, Silence: The Musical, Reefer Madness, Vaudeville’s Dead, Christmas Belles of ’45: An Offensive Radio Play, SHOUT! The Mod Musical, All Shook Up, Hello, Dolly!, Shrek the Musical, the area premiere of Head Over Heels and (in just a few months) The SpongeBob Musical with these ding dang Dingbats! He has been seen onstage at Westcoast Black T h e a t r e Tr o u p e , A r u n d e l B a r n Playhouse, The Players Centre, Venice Theatre, Florida Cultural Group, and with Plump Sisters Productions. Brian works at The Players Centre as Production Coordinator and with Dingbat Theatre Project, where he acts as Associate Artistic Director and Social Media Manger. “Michelle, you’re better than everybody. Jasmine, oofa doofa, hatchi matchi, holy cannoli, aw beans. Luke, thank you for the constant involvement in your company, talent, and friendship. Amanda, thank you for making every day worth it. My love for you is in bulk. I can’t express enough excitement and gratitude to be involved with Dingbat Theatre Project and I hope it lasts forever. This cast will knock your socks off. I couldn’t be more proud. Enjoy!”

MICHELLE KASANOFSKY (Music Director/Band Leader “Skzp”) has been playing piano for almost 56 years and is a professional musician as well as music educator. Michelle received a scholarship to Berklee College of Music in Boston and studied jazz piano there as well as studying classical piano at Boston Conservatory. She completed her B.A. degree in performance cum laude at Dowling College in Oakdale, New York where she studied classical pedagogy under the tutelage of the world renowned piano maestro, Dr. Carlo Lombardi. Michelle continued on to achieve her Master’s Degree in Music Education from C.W. Post Long Island University in Greenvale, New York in 1998 and in 2016 completed her Education Leadership Specialist degree from Nova Southeastern University. Michelle is originally from New York and spent most of her life on Long island. While in New York, she music directed many off-Broadway production which included Always… Patsy Cline and performed all over the world in Europe, Japan, and Korea. Since moving down to Florida in 1998, Michelle has taught chorus, drama, and dual enrollment music classes for close to 30 years. In 2014, she was selected as Charlotte County’s Teacher of the Year. She met h e r N e w Yo r k e r h u s b a n d , N e i l Kasanofsky at a local theater company’s production of Red, Hot, and Cole in 2000 and they have been together ever since. They have a blended family of 6 children, 7 grandchildren, a dog, and a cat. Since 2000, Michelle has performed and music directed at Venice Theatre. Her productions have included Ben Vereen’s Hair, Mamma Mia!, Cabaret, The Toxic Avenger, and Dreamgirls to name a few. She has also music directed at The Players Centre, Manatee Players, and Charlotte Players. Michelle has played for Broadway touring companies at venues such as Barbara B. Mann and Ruth Eckerd Hall for shows including A Chorus Line, Legally Blonde, and West Side Story [cont.]

as well as accompanying artists such as Bernadette Peters and The Irish Tenors. In 2021, Michelle became the resident music director at Venice Theatre. But, above all, she loves music directing for the Dingbats! Having music directed and played for Brian &amp; Luke’s Live Holiday Jamboree and Shrek the Musical (where she also played Fairy Godmother). She’ll be music directing The SpongeBob Musical in December. SOPHIA COSCIA (Projection Design) This will be Sophia’s last show in the area before heading to Carnegie Mellon’s School of Drama for her Freshman year in the design program. As a recent graduate of Booker High School’s VPA Live Entertainment and Design Program, you may have seen her work on productions there or at other theatre in the area including Venice Theatre, Manatee Performing Arts Center, or Westcoast Black Theatre Troupe. Sophia has spent the last year as an assistant curator at the SPAACES Foundation Art Gallery planning her own exhibition “Greeting from Quarantine.” She is so thrilled to be a Dingbat! big thank you to Brain, Jazz, and Ethan for being so helpful in my long distance tech process and to Luke for just being the best. Cheers! JASMINE DEAL (Production Stage Manager / Sound Design) has been a staple in the Sarasota theatre community for several years. She served as a stage manager, audio engineer, and generalist at Venice Theatre after graduating from the Technical Theatre Apprenticeship Program and now holds the position of Production Manager at Royal Palm Players in Boca Grande. Some of her favorite credits include Ragtime, West Side Story, Jesus Christ Superstar, and The 25th Annual Putnam County Spelling Bee. She extends her gratitude to the Dingbat Theatre Project family for including her in this beautiful show.

RACHEL KNOWLES (Makeup Design / Scenic Painter) is beyond excited to be “inching” (get it?) her way back into the theatre scene. After taking a few years off from working on and off the stage in Sarasota, Venice, and Key West, she has found her way back, and is honored to get to work with this wonderful group of humans. “Thanks mom for teaching me everything you know. I’d be nothing without you.” CORY WOOMERT (Wig Design) is super excited to flex his hair skills for Hedwig! Cory has been a master hairstylist in Sarasota for over twenty years specializing in custom multi-tonal hair coloring and formal event styling. His wig styling has been seen on many area stages over the last several years. When he’s not doing hair or styling wigs for theatre, he can be seen on the stage of local theatres, including his most recent run with Dingbat’s Shrek the Musical. He’s honored to be a Dingbat and would like to thank Luke and Brian for entrusting him with this project. Love to Darah, Judah, and Asher!!!! ETHAN VAIL (Lighting Design) is pleased to join the team on this adventure. Credits include Asolo Repertory Theatre: Fannie: The Music and Life of Fannie Lou Hamer, Camelot; The Players Centre for Performing Arts (Sarasota, FL): Head Over Heels, All Shook Up; Millbrook Playhouse (Mill Hall, PA): 65 productions including the regional premiere of Fun home, The Rocky Horror Picture Show, Rock of Ages, The Little Mermaid; Compass Rose Theatre (Annapolis, MD): Cat on a Hot Tin Roof; Manatee Players: Anne of Green Gables. He was the recipient of the 2013 USITT YD&amp;T Award, sponsored by Barbizon Lighting Company, for A Midsummer Night’s Dream that he designed at Purdue University. He is also the Master Electrician at Asolo Repertory Theatre