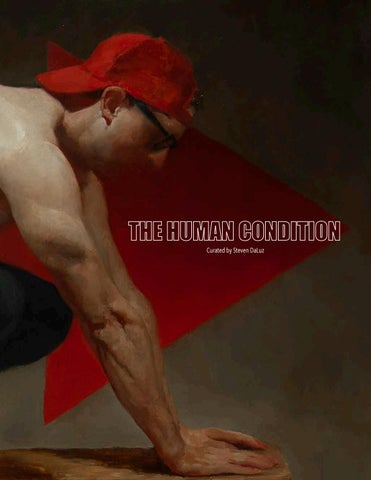 THE PREMISE What is “the human condition”? he Oxford Living Dictionary deines it as, “the state or condition of being human, especially regarded as being inherently problematic or lawed.” this deinition goes back to the mid 16th Century, found in John Alday as early as 15661579. According to Wikipedia, the human condition is “the characteristics, key events, and situations which compose the essentials of human existence, such as birth, growth, emotionality, aspiration, conlict, and mortality. his is a very broad topic which has been and continues to be pondered and analyzed from many perspectives, including those of religion, philosophy, art, literature, anthropology, psychology, and biology. As a literary term, ‘the human condition’ is typically used in the context of ambiguous subjects such as the meaning of life or moral concerns.” It seems we humans are in a predicament, spawned from our inability to understand our state of “imperfection”. Some philosophers pose that this arises from the premise of “good and evil” in our nature. We humans are capable of horriic acts, such as murder, torture, rape, etc. We are aggressive and selish, yet we can be cooperative, selless and loving. We struggle with this incongruent state of being, which produces feelings of guilt within us. Our behavior goes beyond instinct, having psychological facet that involves our conscious, sentient minds. We are egocentric, deceitful, arrogant, jealous, mean, insincere, immoral, etc. Our imperfection is not driven by animal instinct; rather, it is derived from our conscious, human minds. We are lawed beings, and it bothers us greatly. Despite the negative aspects of our being, we also possess a moral conscience, imbued with a caring sense of unconditional altruism and the capacity for kindness and love. he struggle we face creates a dilemma within us, often causing us to deny our human condition. It is something we often shy away from, as it is at the root of so much misery in the world. Yet, it can be the source of so much good. Our human condition is a state of imperfection. he subject for this theme is vast, which gives artists a very wide latitude in creating their expressions of the human condition. Each artist is asked to ponder and explore aspects of the theme that appeals to them and challenges their sensibility. I ask that the work focuses upon the human igure within the context of the theme. — Steven DaLuz Curator, he Human Condition

Steven DaLuz (b. 1953) is known for igurative works

and imagined landscapes, using both encaustic, and a process he devised with metal leaf, oil, and mixed me-

dia. More recently, he has begun experimenting with

who works primarily in oils. He was born outside Ni-

agara Falls and currently lives and works in Buffalo, NY.

from the Air Force after living 14 years abroad. He com-

Marc earned a BA, Art from Buffalo State College in

pleted a BA degree in Social Psychology, and an MA

2002 and continued to study through workshops and

degree in Management, before earning a BFA in 2003.

on his own for the next several years. He started train-

Identiied as a “contemporary Luminist” in Wikipedia,

ing in the academic tradition at the Academy of Realist

his work is in private and corporate collections in 36

Art in Toronto, ON in 2010. Traveling several times a

States and overseas. He has exhibited internationally,

and has been published in art books, and magazines,

part time at the Academy for the next 7 years. Since

such as Art in America, American Art Collector, Fine Art

then he has been included in numerous local, national,

and international shows, including Painting the Figure

The Artists. He is a frequent guest curator for Poets Art-

Speaking at the Salmagundi Club NYC.

ists magazine. A inalist for the 2015 Hunting Art Prize, Best of Show in the Bold Brush painting competition in

Marianna Foster was born and educated in Ukraine,

relocating to Phoenix, Arizona in 2012. In the Ukraine

she was classically trained, graduating from the Nation-

al Institute of Fine Arts and Architecture in Kiev with a Master of Arts degree. During her early professional

Stephanie Deshpande (b. 1975) is a representational

painter living in northern New Jersey. She is best known

for her psychological portraits and narrative paintings.

out her own photographic vision into paintings and

Her work combines her love of realism with personal

drawings. Her inspiration centers on igures and water.

allegories. Deshpande graduated from the University

Primarily she uses classical techniques to represent the

of Massachusetts at Amherst with a BFA in Painting and

modern world. Her works are in private and corporate

continued her studies at the New York Academy of Art

earning her MFA. She was awarded the Ellen Battell

Amy Gibson grew up in Alliance, Ohio. She received

paintings by the Portrait Society of America, RayMar Art,

cus on painting. After college, she shifted her interest

of America, and Oil Painters of America. Her paintings

from abstraction and became focused on the methods

have appeared in several issues of PoetsArtists and in

and practices of traditional realism. Her work focuses

um of American Art acquired her painting “Assembling the Pieces” for their Post Contemporary collection. She

Viktoria Nare Karapetyan is an emerging artist who

is represented by Haynes Galleries in the U.S. and

endeavors to capture (in her realistic works) the condi-

tion of being human, deepening moods and concepts

she portrays are often inspired by the rural environ-

between the dilemma of uncertainty in the presence of

ment she grew up in, in the Central Valley of California.

the unknown, or the concerning fear of what happens afterlife. Viktoria wonders over these matters constant-

ly, and as an artist she feels compelled to guide the

cover different themes, issues, and concepts, but the

viewer over those intimate relections. However she

central theme which unites all of her paintings is the

does not reveal a truth, because she believes the truth

human connection. The paintings examines what

is improbable. She simply tries to converse with the

seems to be separate and isolated life experiences

viewer about these matters, generating a mirror effect

and examines the connections and impact on cultures

between her art and the observer; sort like a symbolic

hidden in each work.

way of uniication John Rowe received his training at Art Center ColFrancien Krieg was born in the Netherlands, she fol-

lege of Design and began his career as an illustrator.

His paintings have appeared on movie posters, books,

Her work is in the Tullman collection Chicago, ING

throughout the country and around the world. John

many private collections. Her work was exhibited at the MEAM museum Barcelona, Wausau museum the

igurative work is primarily based on the people in

NL, also she was working with gallery Mokum Amster-

his life and those whom he meets near home or while

traveling. His paintings depict his subjects in a highly

realistic style as they endeavor to illuminate their inner

dios. Summer of 2019 she was an artist in residence

the aging female body which she painted for 10 years.

The most recent gallery representation is at the Stone

marily with oils, he often ventures into the charcoal and

acrylic area to illustrate his voice. Searching deeper into his subjectâ&amp;#x20AC;&amp;#x2122;s inherited and personal territory, Sandu is

Brianna Lee is a igurative oil painter working in the re-

alist tradition. Her work focuses on the emotional interi-

identity or other typologies. By celebrating diversity,

or world of her portrait subjects, often portraying them

against dramatic landscapes that act as a metaphorical

which suggests, despite our differences, that we can

narrative of their life. Her work aims to highlight the

quiet inward strength and resilience of her female sub-

born (b.1978) and Michigan based artist, Sebastian

jects. The use of contrasted lighting and rich and emo-

Sandu graduated from the National Art and Design

tive colors convey the sentiment of each individual.

University, in Bucharest. His paintings were shown in

While many of her narratives are ictional, she gleans

museums, solo shows, group shows and can be found

inspiration from her own life experiences and of her

in private collections around the United States.

Sam Wilson is a self-taught oil painter based in San

both regionally and nationally, and been recognized

Antonio, TX whose main focus is realism. Born in 1986

with over 60 drawing and painting awards. More re-

originally from Wichita KS Sam was interested in art

from a young age. In high school Sam took a number

of art classes but his main focus was in ceramics. Af-

Drawing and Painting Exhibition and Mama. Her work

may be found in publications including: Manifest INPA

lege with a small scholarship for art. There he took a

few design classes as well as sculpture. From there he

attended The University of Kansas with a focus in Mar-

keting Communications. After a year at KU at the age

shire Magazine, and Studio Visit. She is one of twelve

of 23 Sam took a break from university during which he

painted his irst oil painting under the guidance of his

has her studio practice within the 1899 farm-home she

father, Kent Wilson. From that point on he never looked

and her husband have been renovating in Bedford,

back. He has shown his work in several venues in Wich-

New Hampshire for the past six years.

ita and San Antonio as well as a number of competitions all over the United States. Among other recogni-

Born in the eastern part of Nigeria in the year 1991

tion in 2015 his piece “American Busker” was selected

Austin Uzor hails from Imo state. Uzor trained as a

as a inalist in the Hunting Art Prize in Houston. In 2016

draftsman and painter and has a studio practice setup

he was the irst place winner of the Jerry’s Artarama

around this bedrock. He explores the world of the un-

known by means of delving into psychological spaces,

artwork in private collections throughout Texas and the

feelings, and alternate realities in search of existential

United States. Sam currently lives and works in San An-

now the subject of his most current body of work and narrative, focusing on the traumas of being displaced.

Uzor thinks of his paintings as igurative abstract ex-

traits in the traditional oil technique. Her art contains el-

ements of hyperrealism, surrealism and pure imaginative. Characteristic of her are philosophical texts, which

Victor Wang grew up in Northern China and gradu-

ated BFA from The Lu Xun Academy of Fine Arts, one

the human condition and her powerful women portraits

of three top art institutes in China. After graduation he

show a variety of inner strength which can be found in

people seen from the positive point of view.

The University of Illinois at Urbana-Champaign as a visiting scholar. He earned his MFA in Fontbonne Uni-

versity. He currently lives in St. Louis, where he teaches

Madison, earning a Bachelor of Science-Art degree in

painting, drawing and graduate critique classes as a full

1999. His training culminated in a Master’s degree in

professor at Fontbonne University. He has exhibited

igurative painting from the Academy of Art University

widely across the country and internationally and has

in San Francisco. He graduated with honors and now

for both painting and art instruction. His work has been

has been showing his work nationally and internation-

Curated by Steven DaLuz for Anarte Gallery. This is the 2020 edition. 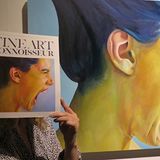