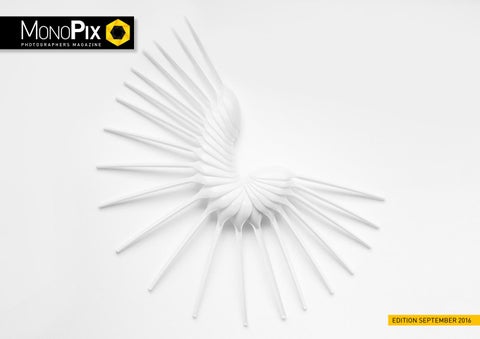 COPYRIGHTÂŠ MonoPix 2016 All rights reserved. Nothing may be copied from this publication, stored in a retrieval system or transmitted in any form or by any means, electronic, mechanical or photocopying, scanning, recording or otherwise, without the prior written consent of the photographers and/or the publisher. MonoPix 2016ÂŠ | 2

MonoPix MonoPix is an international monthly magazine for photographers around the world who like to see there work being published. There are so many photographers among us who doesnâ&amp;#x20AC;&amp;#x2122;t get that chance. Well, MonoPix gives them a chance. Our publications presents the portfolios of amazing photographers. Portraits, street, scapes, or macro photography: each edition of Monopix has a general theme which can include a wide variety of photos. MonoPix is a growing series of hardcover books with the works of international photographers, releasing a new edition every month. Enjoy!

JOZEF KISS Slovakia jozefkiss.com I was born in a little town on the southwest of Slovakia, and now I live in Veľký Meder. Photography has always been my passion, since early childhood, but I decided to study architecture, and I work in that field. Making photos is my hobby, and I do not use expensive equipment. All my photos are taken with a Nikon D3100, initially with the Nikkor 18-105 kit lens, and currently using a Nikkor 1.8/50mm. All models are friends. My photography focuses on portraits, sometimes making still life work as well, but what I love most is low key photos. Preferably, I use a special light setup, with nothing but a reflector and flashes with umbrellas, soft boxes, and beauty dishes. Some of my works have been published in Cameraraw.it and 1x.com, and one of my still life photos was published in Vogue.it. As MonoPix 2016© | 6

another great honor, I was allowed to share a number of my photos in the Monopix book ’’Faces of the World” earlier this year. Also, I have been involved with Artfreelife.com as an editor/curator, but I had to stop doing so due to a lack of time. I’d like to thank Monopix editors Jessica Schaap and Dick Visser for the selection of my work, and all of my models for their hard work: Alexandra Mikos, Eszter Csicsai, Andrea Garai, Mercédesz Mészáros, Edina Csóka, Ramona Nagy, and Barbara Hegyi!

VIOLETTA RIEDEL The Netherlands violettariedel.com Some people know at a young age what they want to do and who they want to be. I did not: for a very long time, I didn’t have a clue what my purpose in life was. But there was one thing I knew for sure: we are all born for something… After graduating in sociology and fashion design, I left my homeland, Poland, for the “better” part of Europe. At first, I settled in Germany. Later I moved to the Netherlands, and the city of Rotterdam has been my home for the past decade. It was in Rotterdam that I got in touch with photography, an art form that intrigued me from the very beginning.  By reading, observing and meeting other photographers, I learned the tricks of the trade, and wherever I went, I took my camera. Submerging myself in photography 24/7 proved to be the best school for me. MonoPix 2016© | 18

To me, the photograph itself is a sketch, the beginning of a process. My focus is not on the end result, because I don’t yet know where this process will take me. Photoshop is my ally in that phase: I “work” the picture until it feels right. I work intuitively, under the influence of emotions. After some time the picture becomes what it was always meant to be.  Capturing fleeting moments, emotions, “something that can not be described”, and creating new realities on film has become my passion. And by finding my passion, I found my purpose.

GABRIEL OLUDE Nigeria Instagram@365dcstudios Born in 1972 in Lagos, Nigeria, Gabriel Olude has a deep passion for fine-art photography. Coming from a family background of photographers, Gabriel has taken his passion a step higher: He has been carving out a niche for himself in fine-art photography, a genre of photography not common in Nigeria. His love for his art is as deep and endless as the oceans. Coming from a family of photographers – including his dad and his uncles – it was inevitable that Gabriel Olude would choose that same profession. As a budding photographer, Gabriel learned the basics from Don Barber, a seasoned pro who has trained thousands of students. Later, he enrolled in the Complete Course at the prestigious New York Institute of Photography, and further improved his skills through various other online courses. One of these courses truly transformed his concept of MonoPix 2016© | 86

photography: Sebastian Michaels’ course turned Gabriel into a fine-art photographer. Ever since joining that course Gabriel’s works have been featured in several international online and offline magazines, and he has been awarded international mentions by numerous professional Facebook platforms. Gabriel loves to share his knowledge, his vision and experience with his students, and he plans to train at least 200 fine-art photographers, further developing the art of fine-art photography. Gabriel Olude is highly honored and privileged to be featured in Monopix magazine.

MonoPix is an international monthly magazine for photographers around the world who like to see there work being published. There are so many photographers among us who doesn’t get that chance. Well, MonoPix gives them a chance. Our publications presents the portfolios of amazing photographers. Portraits, street, scapes, or macro photography: each edition of Monopix has a general theme which can include a wide variety of photos. MonoPix is a growing series of hardcover books with the works of international photographers, releasing a new edition every month. Enjoy! 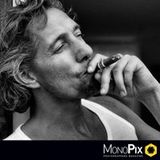