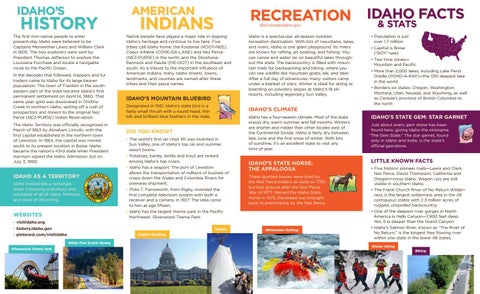 The first non-native people to enter present-day Idaho were believed to be Captains Meriwether Lewis and William Clark in 1805. The two explorers were sent by President Thomas Jefferson to explore the Louisiana Purchase and locate a navigable route to the Pacific Ocean. In the decades that followed, trappers and fur traders came to Idaho for its large beaver population. The town of Franklin in the southeastern part of the state became Idaho’s first permanent settlement on April 14, 1860. That same year, gold was discovered in Orofino Creek in northern Idaho, setting off a rush of prospectors and miners to the original Nez Perce (NEZ-PURSE) Indian Reservation. The Idaho Territory was officially recognized in March of 1863 by Abraham Lincoln, with the first capital established in the northern town of Lewiston. In 1864, the capital was moved south to its present location in Boise. Idaho became the nation’s 43rd state when President Harrison signed the Idaho Admission Act on July 3, 1890.

IDAHO AS A TERRITORY Idaho looked like a rectangle when it became a territory and consisted of all of Idaho, Montana, and most of Wyoming.

Native people have played a major role in shaping Idaho’s heritage and continue to live here. Five tribes call Idaho home: the Kootenai (KOOT-NEE), Coeur d’Alene (CORE-DA-LANE) and Nez Perce (NEZ-PURSE) in the north; and the ShoshoneBannock and Paiute (PIE-OOT) in the southeast and south. As a tribute to the important influence of American Indians, many Idaho streets, towns, landmarks, and counties are named after these tribes and their place names.

IDAHO’S MOUNTAIN BLUEBIRD Designated in 1931, Idaho’s state bird is a fairly small thrush with a round head, thin bill, and brilliant blue feathers in the male.

Idaho is a spectacular, all-season outdoor recreation destination. With lots of mountains, lakes, and rivers, Idaho is one giant playground. Its rivers are known for rafting, jet boating, and fishing. You can canoe and water ski on beautiful lakes throughout the state. The backcountry is filled with mountain trails for backpacking and biking, where you can see wildlife like mountain goats, elk, and deer. After a full day of adventures, many visitors camp under a blanket of stars. Winter is ideal for skiing or boarding on powdery slopes at Idaho’s 18 ski resorts, including legendary Sun Valley.

DID YOU KNOW? • The world’s first ski chair lift was invented in Sun Valley, one of Idaho’s top ski and summer resort towns. • Potatoes, barley, lentils and trout are ranked among Idaho’s top crops. • Idaho has a seaport. The port of Lewiston allows the transportation of millions of bushels of crops down the Snake and Columbia Rivers for overseas shipment. • Philo T. Farnsworth, from Rigby, invented the first complete television system with both a receiver and a camera, in 1927. The idea came to him at age fifteen.

Idaho has a four-season climate. Most of the state enjoys dry, warm summer and fall months. Winters are shorter and milder than other locales east of the Continental Divide. Idaho is fairly dry between late June and the first snow of winter. With lots of sunshine, it’s an excellent state to visit any time of year.

IDAHO’S STATE HORSE: THE APPALOOSA These spotted horses were bred by the Nez Perce Indians as early as 1750 but lost ground after the Nez Perce War of 1877. Named the Idaho State Horse in 1975, the breed was brought back to prominence by the Nez Perce.

• Idaho has the largest theme park in the Pacific Northwest: Silverwood Theme Park.

• Population is just over 1.7 million

IDAHO’S STATE GEM: STAR GARNET Just about every gem stone has been found here, giving Idaho the nickname “The Gem State.” The star garnet, found only in Idaho and India, is the state’s official gemstone.

LITTLE KNOWN FACTS • Five historic pioneer trails—Lewis and Clark, Nez Perce, David Thompson, California and Oregon—cross Idaho. Wagon ruts are still visible in southern Idaho. • The Frank Church River of No Return Wilderness is the largest wilderness area in the 48 contiguous states with 2.3 million acres of rugged, unspoiled backcountry. • One of the deepest river gorges in North America is Hells Canyon—7,900 feet deep. Yes, it is deeper than the Grand Canyon. • Idaho’s Salmon River, known as “The River of No Return,” is the longest free flowing river within one state in the lower 48 states. Winter Skiing Biking

Idaho’s seal became official in 1891 by an act of the state Legislature. The Latin motto, “Esto Purpetua,” means “let it be perpetual.” It’s the only state seal designed by a woman.

State Flag A blue field with a gold border, the state flag proudly displays the state seal with the words “State of Idaho” in gold block letters on a red ribbon.

Idaho Department of Commerce is an equal opportunity employer.

Upon request, the pamphlet will be provided in alternative format for persons with disabilities. This pamphlet was designed and developed for use by students.

Named for the reddish-orange color on the underside of its jaw, the cutthroat trout is native to Idaho. Popular with anglers, it and several subspecies have been named as state fish in six other western states. Idaho's Free Fishing Day is an annual event held the second Saturday every June.

• Idaho has more navigable whitewater river miles than any other state in the continental U.S.

• Since more than 80 varieties of gemstones are found within its borders, Idaho’s nickname is “The Gem State.”

Known as the Hagerman Horse because it was discovered near the south central town of Hagerman, these 3.5 million year-old fossils are closely related to today’s zebra. The site is now Hagerman Fossil Beds National Monument, one of the largest fossil deposits in North America.

• More than 40 percent of Idaho is covered with trees, making it the most heavily forested of the Rocky Mountain states.

The syringa is a wildflower similar to the mock orange and grows in clusters of white blossoms on a branching shrub.

Governor Brad Little and First Lady Teresa Little This brochure was designed with you in mind. Inside you will find that Idaho is a place of great beauty, rich history, and abundant outdoor adventure. Idaho’s geographic features range from deep gorges and canyons to soaring mountain peaks.

The state bird of Idaho—the mountain bluebird—is a small, brilliant blue bird found throughout the American northwest. Birdwatching is a popular activity in Idaho. With 175 sites and 2,000 miles of trail, the Idaho Birding Trail represents a collection of bird watching hotspots, diverse habitats, and a glimpse of Idaho's rich natural heritage. www.idahobirdingtrail.com

Come and visit us soon, and you’ll see why Idaho is a great place to vacation and learn.