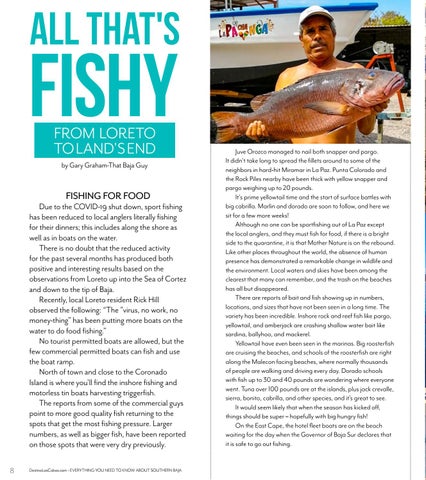 Due to the COVID-19 shut down, sport fishing has been reduced to local anglers literally fishing for their dinners; this includes along the shore as well as in boats on the water. There is no doubt that the reduced activity for the past several months has produced both positive and interesting results based on the observations from Loreto up into the Sea of Cortez and down to the tip of Baja. Recently, local Loreto resident Rick Hill observed the following: “The &quot;virus, no work, no money-thing&quot; has been putting more boats on the water to do food fishing.” No tourist permitted boats are allowed, but the few commercial permitted boats can fish and use the boat ramp. North of town and close to the Coronado Island is where you&#39;ll find the inshore fishing and motorless tin boats harvesting triggerfish. The reports from some of the commercial guys point to more good quality fish returning to the spots that get the most fishing pressure. Larger numbers, as well as bigger fish, have been reported on those spots that were very dry previously. 8

DestinoLosCabos.com - EVERYTHING YOU NEED TO KNOW ABOUT SOUTHERN BAJA

Juve Orozco managed to nail both snapper and pargo. It didn’t take long to spread the fillets around to some of the neighbors in hard-hit Miramar in La Paz. Punta Colorado and the Rock Piles nearby have been thick with yellow snapper and pargo weighing up to 20 pounds. It&#39;s prime yellowtail time and the start of surface battles with big cabrilla. Marlin and dorado are soon to follow, and here we sit for a few more weeks! Although no one can be sportfishing out of La Paz except the local anglers, and they must fish for food, if there is a bright side to the quarantine, it is that Mother Nature is on the rebound. Like other places throughout the world, the absence of human presence has demonstrated a remarkable change in wildlife and the environment. Local waters and skies have been among the clearest that many can remember, and the trash on the beaches has all but disappeared. There are reports of bait and fish showing up in numbers, locations, and sizes that have not been seen in a long time. The variety has been incredible. Inshore rock and reef fish like pargo, yellowtail, and amberjack are crashing shallow water bait like sardina, ballyhoo, and mackerel. Yellowtail have even been seen in the marinas. Big roosterfish are cruising the beaches, and schools of the roosterfish are right along the Malecon facing beaches, where normally thousands of people are walking and driving every day. Dorado schools with fish up to 30 and 40 pounds are wondering where everyone went. Tuna over 100 pounds are at the islands, plus jack crevalle, sierra, bonito, cabrilla, and other species, and it’s great to see. It would seem likely that when the season has kicked off, things should be super – hopefully with big hungry fish! On the East Cape, the hotel fleet boats are on the beach waiting for the day when the Governor of Baja Sur declares that it is safe to go out fishing. 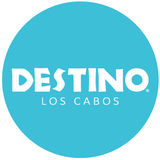