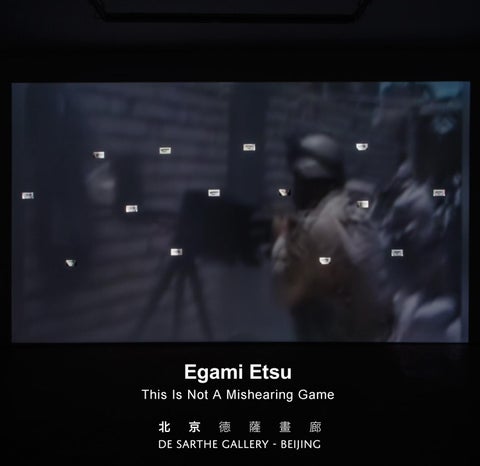 This Is Not A Mishearing Game

Egami Etsu was born in Japan, not only grew up in Japan, but also she has a growing experience in the United States, Europe, and now she is in China. Because of different languages and the experience of encountered many barriers to communication, like Chinese "only to be sensed, not to be explained," so it gradually deepened her interest in the language and communication. She graduated from Central Academy of Fine Arts oil painting department in 2016, her graduation works won the award, collected by the CAFA Art Museum. She continues her study for master degree in CAFA tutor by artist Liu Xiao Dong. In addition, her works has been shown in US, China, South Korea, and Japan. As Japanese art critic Chiba Shigeo said “Egami Etsu uses different media and method to inquire the communication in modern society and human essence” ; Chinese curator Feng Bo Yi also said “Etsu's creation is about concept and significance of “Communication”, through the painting and video and the way of mis-hearing game, contrast to changes of the times, the clash of civilizations, which verified the language communication barriers, and even phenomenon of crisis, showing the multi media expression way and the narrative discourse". Through the create investigation of the participation, Etsu Egami’s work including different media like voice, video, and drawing, as she raise the question to the human instinct and the authenticity of communication.”

It Is Not A Mishearing Game 2016 Video Dimension variable

Born in Japan Currently lives and works in Beijing and Japan

Published on the occasion of de Sarthe Gallery - Beijing exhibition:

Egami Etsu - This Is Not A Mishearing Game

Egami Etsu - This Is Not A Mishearing Game