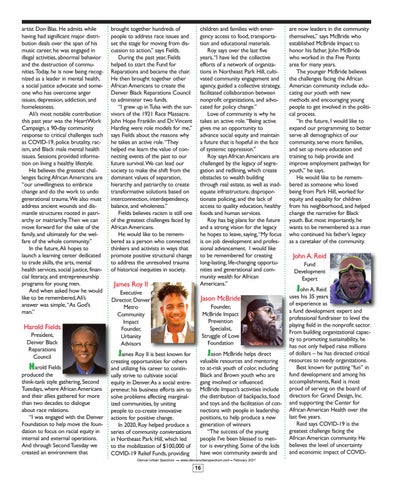 artist Don Blas. He admits while having had significant major distribution deals over the span of his music career, he was engaged in illegal activities, abnormal behavior and the destruction of communities. Today, he is now being recognized as a leader in mental health, a social justice advocate and someone who has overcome anger issues, depression, addiction, and homelessness. Ali’s most notable contribution this past year was the HeartWork Campaign, a 90-day community response to critical challenges such as COVID-19, police brutality, racism, and Black male mental health issues. Sessions provided information on living a healthy lifestyle. He believes the greatest challenges facing African Americans are “our unwillingness to embrace change and do the work to undo generational trauma. We also must address ancient wounds and dismantle structures rooted in patriarchy or matriarchy. Then we can move forward for the sake of the family, and ultimately for the welfare of the whole community.” In the future, Ali hopes to launch a learning center dedicated to trade skills, the arts, mental health services, social justice, financial literacy, and entrepreneurship programs for young men. And when asked how he would like to be remembered, Ali’s answer was simple, “As God’s man.”

H arold Fields produced the think-tank style gathering, Second Tuesdays, where African Americans and their allies gathered for more than two decades to dialogue about race relations. “I was engaged with the Denver Foundation to help move the foundation to focus on racial equity in internal and external operations. And through Second Tuesday we created an environment that

brought together hundreds of people to address race issues and set the stage for moving from discussion to action,” says Fields. During the past year, Fields helped to start the Fund for Reparations and became the chair. He then brought together other African Americans to create the Denver Black Reparations Council to administer two funds. “I grew up in Tulsa with the survivors of the 1921 Race Massacre. John Hope Franklin and Dr.Vincent Harding were role models for me,” says Fields about the reasons why he takes an active role. “They helped me learn the value of connecting events of the past to our future survival. We can lead our society to make the shift from the dominant values of separation, hierarchy and patriarchy to create transformative solutions based on interconnection, interdependency, balance, and wholeness.” Fields believes racism is still one of the greatest challenges faced by African Americans. He would like to be remembered as a person who connected thinkers and activists in ways that promote positive structural change to address the unresolved trauma of historical inequities in society.

J ames Roy II is best known for creating opportunities for others and utilizing his career to continually strive to cultivate social equity in Denver. As a social entrepreneur, his business efforts aim to solve problems affecting marginalized communities, by uniting people to co-create innovative actions for positive change. In 2020, Roy helped produce a series of community conversations in Northeast Park Hill, which led to the mobilization of $100,000 of COVID-19 Relief Funds, providing

children and families with emergency access to food, transportation and educational materials. Roy says over the last five years, “I have led the collective efforts of a network of organizations in Northeast Park Hill, cultivated community engagement and agency, guided a collective strategy, facilitated collaboration between nonprofit organizations, and advocated for policy change.” Love of community is why he takes an active role. “Being active gives me an opportunity to advance social equity and maintain a future that is hopeful in the face of systemic oppression.” Roy says African Americans are challenged by the legacy of segregation and redlining, which create obstacles to wealth building through real estate, as well as inadequate infrastructure, disproportionate policing, and the lack of access to quality education, healthy foods and human services. Roy has big plans for the future and a strong vision for the legacy he hopes to leave, saying, “My focus is on job development and professional advancement. I would like to be remembered for creating long-lasting, life-changing opportunities and generational and community wealth for African Americans.”

J ason McBride helps direct valuable resources and mentoring to at-risk youth of color, including Black and Brown youth who are gang involved or influenced. McBride Impact’s activities include the distribution of backpacks, food and toys and the facilitation of connections with people in leadership positions, to help produce a new generation of winners “The success of the young people I’ve been blessed to mentor is everything. Some of the kids have won community awards and

are now leaders in the community themselves,” says McBride who established McBride Impact to honor his father, John McBride who worked in the Five Points area for many years. The younger McBride believes the challenges facing the African American community include educating our youth with new methods and encouraging young people to get involved in the political process. “In the future, I would like to expand our programming to better serve all demographics of our community, serve more families, and set up more education and training to help provide and improve employment pathways for youth,” he says. He would like to be remembered as someone who loved being from Park Hill, worked for equity and equality for children from his neighborhood, and helped change the narrative for Black youth. But most importantly, he wants to be remembered as a man who continued his father’s legacy as a caretaker of the community.

J ohn A. Reid uses his 35 years of experience as a fund development expert and professional fundraiser to level the playing field in the nonprofit sector. From building organizational capacity to promoting sustainability, he has not only helped raise millions of dollars – he has directed critical resources to needy organizations. Best known for putting “fun” in fund development and among his accomplishments, Reid is most proud of serving on the board of directors for Grand Design, Inc. and supporting the Center for African American Health over the last five years. Reid says COVID-19 is the greatest challenge facing the African American community. He believes the level of uncertainty and economic impact of COVID-

Denver Urban Spectrum recognizes Black History Month and features Lauren Y. Casteel with the Women's Foundation of Colorado, her father the late Whitney M. Young Jr. and her daughter, artist Jordan Casteel. DUS also looks at the COVID-19 vaccine and how it is impacted with the Tuskegee Experiment. And seventeen individuals are recognized as the 2021 African Americans Who Make A Difference in Colorado! 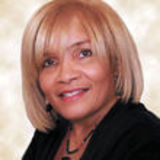