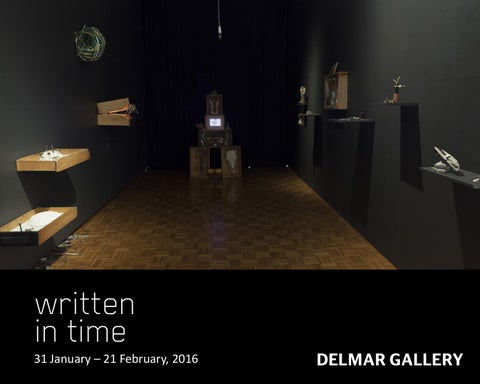 Lauren Beasley’s paintings use collage as their starting point, juxtaposing and layering images she has collected. These may be her sketches of landscapes and flora, or old family photos or images she has no personal connection to, collected from the internet. She reproduces these fragments in paint, combining them to create compositions that hover between fantasy and reality. She is interested in the way the interpretation of an image can shift dramatically according to its context: “Collage has the ability to distort and create new paradigms of viewing that can question our sense of reality. Seemingly concrete elements such as time, space and place become slippery concepts susceptible to the mind and how we choose to interpret them. In my paintings, I construct new sceneries from disparate imagery, playing on ideas of reality and representation. These ideas endeavour to mirror the image’s relationship to truth with in a highly digitalized society and its ability to influence and distort social ideals of reality and the way we view ourselves and surroundings.” Lauren completed a BVA at Sydney College of the Arts. Exhibited works: Authentic/Synthetic 2015 oil on canvas, 150 x 150cm Out of Cannes 2015 oil on canvas, 180 x 120cm Lights on, lights off 2015 oil on canvas, 150 x 150cm

Camilla Cassidy is currently undertaking a PhD in painting at Sydney College of the Arts. Her research is focusing on cultural and personal memories. Specifically her work refers to the light and diagrammatic space of Francis Bacon’s works, and 1980s punk bands. A trend in contemporary painting is to look back to 20th century art styles and movements, but rather than appropriate them with an ironical stance, seek to ‘re-animate’ or ‘re-enact’ them. This may be a reaction to the prevailing state of amnesia in our technologically-driven, information age – a move against forgetting. While time feels like it is accelerating and one technological innovation quickly replaces the next, there is an innate human desire to slow it down and hold onto fragments of the past. Camilla’s work grapples with this desire, creating “ghostly echoes and disconnected familiarities.” Exhibited works: Danse Society 1985 2015 chalk & oil on canvas, 120 x 120cm Psychic TV 1982 2015 chalk & oil on canvas, 120 x 120cm

Rebecca Gallo’s art practice encompasses sculpture, installation, drawing, photography and video. These elements are combined in works that examine the ways in which we invest objects with meaning and value. From the symbolism of rocks to the potential of industrial cast offs, objects are reconfigured and re-presented to propose new systems of classification and understanding. There are clear definitional parallels in junk and art. Objects are branded as junk and discarded when they are no longer useful to us. Similarly, for an object to be judged as art, it generally must have no practical use. In Gallo’s work, junk and art are conflated. Rejected objects are collected and redrafted as elements of an artwork, stripped of their former functionality to become aesthetic and symbolic objects. Gallo studied at the National Art School before completing a Master of Fine Art from UNSW Art & Design in 2015. Recent exhibitions include a two-person show at Firstdraft Gallery and group shows at 107 Projects, .M Contemporary, Kudos Gallery, The Bearded Tit and the Rookwood Cemetery Sculpture Walk. From 2014-15 Gallo was a co-director of Archive_ ARI, an artist-run space in inner city Sydney, and was the editor of RAVEN Contemporary (now archived), a national online platform for visual art. As a freelance art writer she has contributed to publications including Vault Magazine, The Art Life and Runway Experimental Art Journal. Exhibited work: Old Things 2015/2016 found objects, video on digital photo frame, mixed media

Heath McCalmont Parkinson works with pre-digital photographic processes. Using film and polaroids, he experiments with incorrect or unconventional use of darkroom materials, creating a tactility in the prints which lies outside the reach of digital photography. Taking cues from 1970s/80s photographers such as Francesca Woodman and seminal works by Felix Gonzalez-Torres, he documents his domestic and intimate life with his partner over a 12 month period. Set entirely within the confines of their flat and apartment building, moments of tenderness, vulnerability, self-examination and duality within a relationship are revealed in formally composed photographs. Heath is the recipient of the 2015 PhotoKing Professional Award, as well as being one of five National Art School nominees for Hatched 2016: National Graduate Show, to be hosted at Perth Institute of Contemporary Art. He also has a work held in the National Art School permanent collection. Exhibited work: Better than One/You and Eye 2015 polaroid and silver gelatin prints

William Meadley’s work is a tussle between two contradictory impulses in painting. Trying to find a role for the painter in the 21st century, he has looked back to the heroic modernism of artists like Mark Rothko, and the anti-heroic stance of post-modern artists like Martin Kippenberger. On one hand, he is drawn to the existential emotion in Rothko’s work: “I am interested in Rothko’s ability to create a meditative void, expressing the emotive conditions of tragedy, ecstasy and doom, as it is increasingly searched for in an age of speed.” But on the other hand, in a digital age, he can’t negate the resonance of Kippenberger’s insistence that an artist can chop and change between styles and media, and that quantity overrides quality in a world where nothing is original. “This particular painting is an embodiment of the struggle between the need for a meditative state and a desire for immediacy, both in the role of an artist and painter, and in the contemporary human psyche. From Rothko I have borrowed the heroic scale and his deep, calm blues and maroons, and then overwhelmed it with fast Kippenbergerlike gestures and forms of bright greens, yellows and pinks.” William competed a BVA at Sydney College of the Arts. Exhibited work: Untitled 2015oil and acrylic on canvas, 304 x 204cm

In George Shaw’s three–year Masters studio research at Sydney College of the Arts, he set himself the challenge of how he could take the intimacy that exists between two people as the subject for an artwork, rely on autobiography to create the work, yet paradoxically not reveal any details of their story. By withholding the specifics of their shared history, he aims to explore the ethics of a relationship, the dynamics of interpersonal interactions, empathy and vulnerability. His research looked to artists such as Sophie Calle, Marina Abramovic and Ulay, and Bill Viola. “Critical to my work is the idea of two people encountering each other face to face, both literally and metaphorically. Every work that I have created as part of this research has a face-to-face encounter, even when the work is inanimate objects (such as books on lecterns). The faceto-face encounter is defined and explored through the philosophical ideas of Emmanuel Levinas, who saw the encounter between people as central to human existence. At the core of this encounter is an ethics of responsibility, the responsibility we have as human beings towards each other. The human face is the site from which this happens: the face is a unique signifier of “humanness” and when we have a face-to-face encounter with someone else, we are at our most vulnerable.” Exhibited works: Nothing Left Unsaid 2013 mixed media installation You, Always, Never 2015 performance for two-channel video Look what we’ve done to each other 2014 performance for two-channel video

Edward Whitelock has completed a BVA in ceramics at Sydney College of the Arts. He is interested in how he can transform ceramics from inanimate objects understood to be brittle, stiff and cold, to an interactive, dynamic installation. By adding a flow of air to the ceramics, they become instead musical instruments, able to be played and harmonized by the gallery visitors. Exhibited work: You’re the Voice 2015 ceramics, compressed air, metal,

an exhibition of works by 2015 graduates and PhD candidates from Sydney art schools, held at Delmar Gallery, Sydney, February 2016

an exhibition of works by 2015 graduates and PhD candidates from Sydney art schools, held at Delmar Gallery, Sydney, February 2016