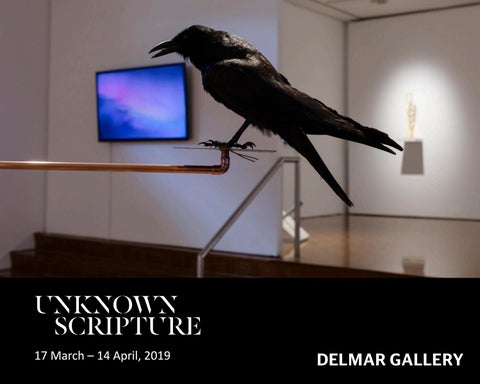 EUGENE CHOI is a performance-based artist whose practice has evolved around the physicality of constructing internal and external structures working across sculpture, performance, installation, video and text. Often influenced by the body in movement, Choi seeks comfort through intimate gestures, relying on the live response of her physical and emotional body. A self-made system of geometry becomes integral between objects, bodies and space, attempting to achieve equilibrium. Exhibited works: The Memory (of holding onto you) 2019 plaster, paper Complex Crosshair (donâ&#x20AC;&#x2122;t you dare silence me) 2019 plaster, galvanised steel pipe

GEORGIA FREW is a trans-disciplinary artist living in Sydney. With a particular focus on social anthropology, ritual objects and actions, the concept of ceremony and the sacred in a contemporary context, she endeavours to explore instincts and desires that often remain concealed within modern society. She is also interested in the behaviours learned and upheld as a consequence of existing in the contemporary milieu and seeks to critique these within her work. Her performative practice incorporates elements of film, intuitive movement, sculpture and vocalization, while her sculptural works engage with a variety of mediums, including elements of native flora and fauna as well as ceramics, textiles and various metals. Her work seeks to elicit questions surrounding collective and individual memory as well as ideas around the human desire for genuine emotional expression in response to stimulus. Exhibited works: This is how it feels (Pitt St) 2018 HD video, textiles, porcelain

LIAM GARSTANG is an artist based in Sydney. Garstangâ&#x20AC;&#x2122;s practice is based on personal, generational, and collective events and iconography, as well as deep spontaneous emotional responses to place. A strong sense of the performative underpins his work, inasmuch as it is oriented around notions of ritualisation, presence and the gesture. It evokes questions relating to experiences of loss and reclamation, and aims to open up dialogues for himself and his audience that explore alternative modes of expression. His works are realised through a trans-disciplinary approach that includes installation, video, performance, printmaking, and ceramics. In 2016 and 2017 Garstang curated a series of exhibitions for the St Jeromeâ&#x20AC;&#x2122;s Laneways Festival, Sydney, and the SCA Galleries, Sydney College of the Arts. Exhibited work: The Orbit 2019 taxidermied crow and budgerigar, copper, motorised stand

ROBIN HUNGERFORD is a Sydney based artist who works across the mediums of video, sculpture and performance. Hungerford is interested in ideas related to an understanding of the human condition; domains of consciousness, technology and science are explored, subverted and reconfigured in unique and often comic forms in an attempt to highlight the hidden and paradoxical elements of existence. Exhibited works: The Great Fabricator 2016 polyurethane, gold leaf The Fix 2011 HD video Sermon Wall Part 2 2016 HD video

RICHARD KEAN is an artist based in Sydney who leads a research practice that engages with translating unseen phenomena of music, sound, electromagnetism, the atmosphere and space through drawing, sound, number, objects, data recording and performance. Exhibited works: Architectural Bow 2019 black acacia, steel Harmonic Bloom 2019 acrylic on board

SARA OSCAR is a Sydney based artist who works with the medium of photography. Her work reflects the diverse nature of photography as a way of investigating the mediums complex relationship to the past and its narration. Oscar takes the archive as a starting point for her practice, and employs strategies of appropriation and digital collage to play upon the subject of her works. Exhibited works: Traditional Mediums 1 - 7 1984/2019 archival pigment prints on Hahnemuhle paper