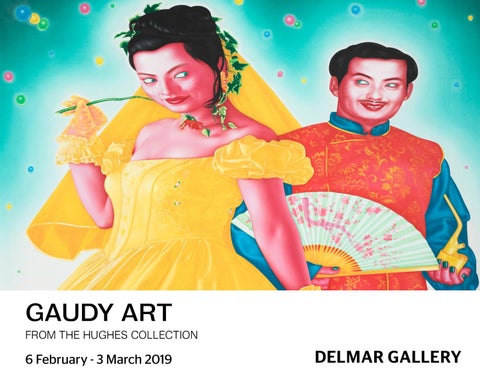 Delmar Gallery is pleased to present a second exhibition drawn from the extensive private collection of the late art dealer, Ray Hughes, and his son Evan. The first exhibition held in 2017 focussed on Hughes’ West African art collection, unparalleled in Australia. This exhibition shifts the focus to Chinese contemporary art of the mid to late 1990s, zooming in on a trend in art that was emblematic of its time, Gaudy Art. Ray Hughes first travelled to China in 1997. From 2000 to 2008, he and Evan returned there 13 times and presented 10 exhibitions by Chinese contemporary artists in their Sydney gallery. Ray established a reputation for championing contemporary Chinese art, which he found so compelling because of the massive social and economic changes that China was undergoing. He wanted to see firsthand how artists were responding to these changes. Following the collapse of the pro-democracy movements with the Tiananmen Square massacre on 4 June 1989, some artists that had been at the forefront of the “New Wave” of Chinese contemporary art in the 1980s went into exile and others retreated from making provocative work. Various trends and styles emerged, but most often cited are the movements “Political Pop” and “Cynical Realism”. While Cynical Realists withdrew and focussed on the individual, Political Pop artists chartered the transition from a communist to a consumerist society, often using irreverent portrayals of Mao in their imagery.

“Gaudy Art” was coined by a prominent Chinese art critic, Li Xianting, for a series of exhibitions he curated in 1996, amongst them “Gaudy Life” and “Models for the Masses”. “Gaudy” in Mandarin is “yansu” – “yan” means garishly coloured and “su” means vulgar. Li had identified “yansu” as a development from Political Pop, where artists were using high key colours and imagery from popular culture to parody the emerging consumer culture and pervasive ‘get rich quick’ mentality. Several of the artists in the current exhibition were included in these 1996 exhibitions – Qi Zhilong, Chang Xugong, Luo Brothers and Feng Zhengjie. The exhibition is divided into two sections. The first reflects on the Cultural Revolution, which Mao launched in May 1966, demonising traditional Chinese culture and unleashing horrific violence throughout the country. Hai Bo’s poignant diptychs serve as a context for the nostalgia of Qi Zhilong’s portrait of a Red Guard and the biting criticism in the Luo Brothers’ portraits of revolutionaries. The second section groups together works that satirise how rapidly the appetite for Western brands and consumer goods replaced communist zeal in the general populace, once Deng Xiaoping announced “to get rich is glorious” and China opened its doors to the free market. Catherine Benz Curator, Delmar Gallery Trinity Grammar School

Gaudy Art from the Hughes Collection

Gaudy Art from the Hughes Collection