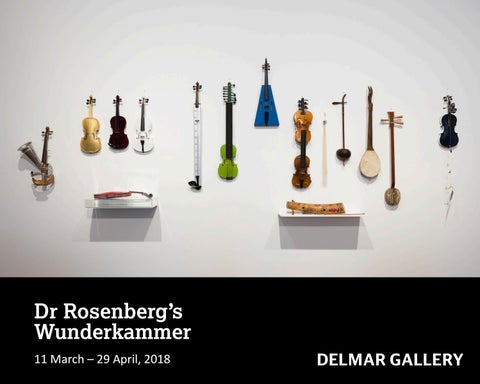 Somewhat like King Canute and the tide, nothing you say or do can really defeat entropy. Decay, misuse, casual neglect, technological obsolescence, the constant changing of a musicianâ&#x20AC;&#x2122;s abode, theft, the recycling of materials, the lack of resources, and time itself reduce a collection such as this to an odd register of curiosities. But the dysfunctional and entropic nature of The Rosenberg Museum does have a very salient quality: it mirrors the cultural curves and characteristics inherent in late capitalism. What you witness is an incomplete anthology of violin artefacts that all boasted a physical reality at some time or otherâ&#x20AC;&#x201D;and some that still do. The intention is to demonstrate a prescient visualisation of this cultural icon as the instrument is turned to reflect and relish, in allegory and metaphor, the realities of recent history and contemporary life. Enjoy. JON ROSE

THE STORY of how a suitable home was found for The Rosenberg Museum is now widely accepted by musicologists, although still sceptically viewed by cultural critics who have never been there. A short account of its existence reads thus: Located within a Hungarian enclave in darkest Slovakia, the town of Violin was owned by a Count Violini, who lost it in a card game at the beginning of the 20th century. Owing to the debt, the town was consequently held by The Bank of Slovakia for several decades, until being flooded by the Danube in the 1950s. After this unfortunate set of disasters, the Mayor of Violin gave Jozef Cseres (pictured left) the football club to be the Museumâ&#x20AC;&#x2122;s permanent home, and the rest (turned out not to be) history, as local residents took a dislike to both director and his museum, threatening Jozef with his life unless he and his violins took leave. Hence, the museum activities were curtailed to once in a decade celebrations. The inaugural football match between residents and the museum was abandoned at 0-0 owing to the grass being over one metre in height.

The Chair Harp A discarded chair from the street fitted with 12 strings and machine heads; best played up ended in the style of a dulcimer, cimbalom, or santur with wood sticks.

Oil Drum Cello This old drum cello is a recreation of an instrument built in a Japanese P.O.W. camp during WWII, based on the memoirs of Dr. Solomon Bard, an internee in the camp.

The Stroh Violin On the border between Thailand and Myanmar in a small and undistinguished hut, copies of the famous Stroh violin are manufactured in brass and aluminium. They are an invention inspired by early mechanical recording techniques and the inability of regular violins to be â&#x20AC;&#x2DC;heardâ&#x20AC;&#x2122; by the huge recording horns then used to document the performances of violin virtuosos and other sonic entertainments.

Yia Nuka (My Story) This is a violin painted by Kathleen Buzzacott, of Pitjantjatjara and English descent. When Jon gave me this old violin to paint, he told me it was once broken and then put back together again. As I began to paint, my story came out. I thought of my grandmother, my white grandmother.

The Ten Clock Violins, Berlin, 1988 There used to be a store on Oranienstraße, Kreuzberg (Berlin) that specialized in the East-West import of cheap domestic appliances. To his amazement, one day the author saw a clock violin in the window; then a few months later, another of a completely new design. Much to the shopkeeper’s complaints (‘a good citizen only needs one clock, not ten!’), the entire box was purchased.

The Data Violin (violin music powered directly by real time data from Wall Street) is a joint project between Martin Riches, Sukanda Kartadinata, and Jon Rose. It made its world premiere at The Rosenberg Mseum in Berlin, May 2015, accompanied by a small string ensemble playing a corrupted version of Pennies from Heaven.

The Diaphonium A recent contribution to the museumâ&#x20AC;&#x2122;s collection, this half-sized cello is made entirely of transparent plexiglas (methyl methacrylate or acrylic sheet). It has 12 strings and is designed to be played with 4 e-bows in installation mode.

The Musical Coffin In the violin business, the traditional black wooden violin cases are known as â&#x20AC;&#x2DC;coffin cases,â&#x20AC;&#x2122; and, indeed, once a violin is considered flesh, no more imagination is required.

Kami Kaze Violin, Rotterdam, 1999 As followers of the late Dr. Johannes Rosenberg will know, the world-famous violinist joined the Japanese Imperial Air Force in 1942 and survived the war as a failed Kami Kaze pilot.