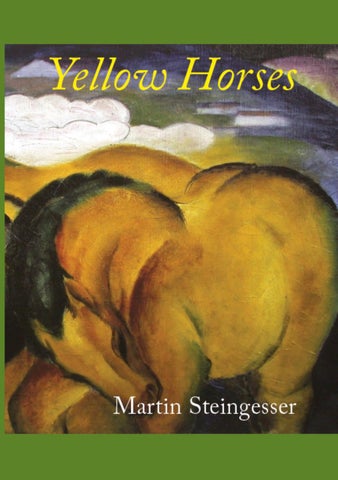 Page 61 constitutes an extension of this copyright page ISBN: 978-0-9904287-8-7 On the cover: Little Yellow Horses by Franz Marc Book design by Jeffrey Haste

Between Stars Always, there is a choice— to align with life or go some other way.

It is hard to keep one’s nerve for what one feels to be true. —M.C. Richards This is the insecurity into which we must enter: not to know, but to keep going. —Maggie Ross He had grown up visited by swimming sensations of immensity, sensing community with a reality that began where dominion of his senses ended . . . naturally inclined to accept the universe as a mansion of spirit rather than a congeries of matter.” —Seamus Heaney I will follow the path of the song, though the roses are fewer.” —Mahmoud Darwish

The Gift Stop awhile, here at water’s edge, this calm, breezeless, sunny Indian summer morning, the bay ripple-less, except for an occasional cat’s paw ruffling the surface, sunlight playing there, as if, in one enviable gesture, someone threw a scatter of gems over the water. The gift—just to be here, sunlight riding the waves, beauty wider than the bottomless blue, maybe only one white note, a passing gull, a sea bell in the distance. So what longing drives me headlong to unanswerable questions—these old, dog-eared ones, smooth and opaque as sea glass: Where are we going? Who am I?—smudging the autumn air soon as spoken. Oh, what, what would it be like behind the eye of the seagull, that puppy running along the shore?

Every morning I set out on road, or lake or into the woods, looking for something to catch my eye, or ear, something for the heart’s appetite, something maybe to breathe into and call—well, yes, a poem. I was playing, too, the part of a poet I know who does this, who knows how to cast and jig a line, time after time catching the prettiest fish, more than anyone I know, and morning after morning—every morning I came back empty-handed. Then, one morning before leaving this country of the blue mountain and blue lakes, I made it out onto Eagle Lake. O there was the stillness of glass and a mist to get lost in, and I found a monarch butterfly on the water frost had caught by the wings. I breathed over it, paddling home—not, finally, with the butterfly, which flew, and more than the poem about how breathing lifted wings, but how to come home again and again with what look like empty hands, the gift —and there is one, even when I don’t see, don’t listen— how to hold this nothing, loving its flavor, the scent.

Red Bird From some podium hidden high in one of the maples behind my house, a cardinal is filling morning with the glory of Verdi. His song comes native with the Sun, not only because he sings like an opera star, but because he feels like ours, mine and my wife’s, once singing the Sun up outside our bedroom window. I have been away working, and the other night we felt the strangeness of separation— shy egrets after winter, different migrations. After dinner, we nestled on the couch, feeling our way back to tenderness, moved on to bed, allowing bodies their own way, finding each other the way children born to different languages begin friendship in play without speech or even animals of different species. I think of the story of a polar bear and husky, the bear not mauling the dog, responding instead to doggy gestures for play, or the natural rapport of an autistic boy with animals. He would run up to them—wild ones. Once, he threw himself belly up under a big bay, an alpha mare. She stood still as stone, his father tells, the boy’s soft form so close to the hammer-hard hooves, then dipped her head, lips mouthing, a gesture of submission. Something hammer-hard separating us, something about every living thing, different, alone, something that can trample hearts— I felt it that night dip its head, a grace of union before lips, hands, our soft bodies. Again, I scan the treetops, this time with binoculars, but can’t find the cardinal. Silent awhile—everything still, not a whisper among leaves. Then he sings. How like this red bird, love.

The Sky Full of Birds The chink of spoons on china, background chatter, music piped in; outside, the sky full of soaring birds, on the street passersby walking to work, sun shining through the window on my face. I’ve been reading letters from a Dutch Jew, Etty Hillesum, about a transport she witnessed being loaded for Auschwitz, planks pulled from the cars, hands waving through gaps, the locomotive hiss and shriek, 3,000 Jews about to leave. “The sky is full of birds,” she wrote, “sun shining on my face,” heaven and earth in her rushing head-on. What bewilders— that sun on our faces, hers but weeks, countable hours from the gas chamber, my own star a golden oriole of spring, armfuls of sun to warm and nourish what seed, what crop my heart might harvest. Fate—karma, kismet, chance, luck, you bewilder me. Everything bewilders me. Long ago, I thought one day life would open her pockets, that I’d be able to answer a few questions like What is this country I’m crossing? What station do I get off ? Where to from there? And still, I have no idea what the ground under me is, no idea where I stand. And what do I do with this word bewilder? The strange word bewilder. Be wilder. Maybe wildness isn’t lack of restraint but an ability to be in doubt, like Keats said, without reaching after reason. Printed in blue on the pencil I am holding is the word Focus— Focus and be wilder. For Etty, stakes were high, calling down God into that circle of barbed wire. Sometimes I feel so pedestrian shuffling the small ways I do to feed myself, keep warm, clear away the daily messes, bewildered, wanting to be wilder loving this only and one life, wanting to write a line of meaning into it all, “lend the silence form, contours,” like she said, like she did, even when tired, cold, hungry, frightened.

To articulate the past historically . . . means to seize hold of a memory as it flashes up in a moment of danger.” —Walter Benjamin

Oswięcim / Auschwitz-Birkenau, Poland, 2014 There’s the train in the night again, running like clockwork. How sleep here a neighborhood walk from the killing camp, named for birches? Birkenau. Wind, occasionally deer that have returned, moving past vacant barracks, stepping through snow over the ruins of a crematorium. I lie in the dark, listening. Again, that mournful horn . . . I can tell the hours by the sound as trains approach and pass. Listen, you’ll hear the iron wheels on rails, clacking over ties too fast to count, the tracks a musical staff of dark refrains, drums for a cortege. You can’t count them, the transports, ghost trains of Jews and Gypsies: partisans, the freethinkers, whistleblowers of any stripe, every country; rivers of trains out of Germany, Czechoslovakia, Hungary, France, Russia, Italy, delivering the anonymous millions; martyrs and saints, like the Polish Friar who took the place of a Jew chosen to be hung, or the Austrian peasant who stood alone in his rural village against the Nazis. Faces go by, flickering among trees outside Paris, Brussels, Amsterdam, Krakow, each a light belonging in a window propelled to the camps, the selections— those faces, numberless numbers on the platform beside transports, despairing, hopeful, wrapped in babushkas, overcoats, luggage and bundles in tow, as though caught in a crowd escaping to mountain spas or the seashore. How not see my face among them? And those transports, how not hear them? Listen through sleep’s curtain for the horn in the night, the wheels traveling the rails, trail of tears across the continents: Vietnam, Chile, Salvador, Abu Ghraib, Gaza, Guantanamo— Bless now, each shaved head, the tide of hair, the nameless drowned, the trains rushing away, all those gone on their way.

Compline After vespers, compline ends the monastic day. Some monasteries today combine the two. Compline also has undergone a generalization in meaning, often now used to denote any service centered in chant and silence.

“I wish they’d sung in Latin,” my friend said, as we stepped out into one of those wide summer evenings, when air is freshness itself, not so much scented by grass, pine, wild rose as filtered through—smelling of nothing, like desert air, or after rain. Vespers! Ah, for me, declining corporate faith, god breathes in the bells—Angelus of evening, moonlight ringing through fields, woods—and the long, round stillness of night. We were drawn to a local church’s service of compline, chant and silence. Have you ever heard that saintly voice out of the Middle Ages, the Abbess Hildegard of Bingen? I wish they’d sung in Latin, too. Holiness— have you noticed how haltingly it walks with meaning? Too rarely I find it among the learned keepers of faith, in sermons of priests or rabbis. Always when in a church, eyes ascending along the long arches upward, stunned by the sun-colored stories, I think of hands, workers’ hands and the artist’s dreams that led them. The church where we came to listen gave guidelines for meditation and the uses of silence: Choose a simple word, they said, such as God or Love, or simple image like the cross on the altar. Silence. Oh, silence of hands that held the trowels, lifted stones and breathed out cathedrals. And breath—life, spirit, whatever you want—call it god or goddess, riding the uvula of song into the world.

Where the Good Words Come From One can be clever, say they hide like pollen until brushed by some loving tongue or gleam at the edges of sharp knives. What I am really asking is how grace enters. How is it sunshine one moment fills me as though inside a nectarine and another feels like grey felt? “I love this poem,” my wife says,

looking from a book in her hands, reaching over, touching my arm. “Can I read it to you?” And there’s the voice I know as hers but belongs to a stranger, a man I’ve never heard, alive, the book jacket says, in some other time, another place. My wife reads, and the words, the way she touched me, the way her eyes water— something enters, like the word nectarine, flavor of morning, first birdcalls, sunrise on the tongue. 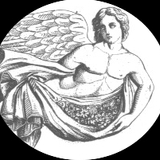