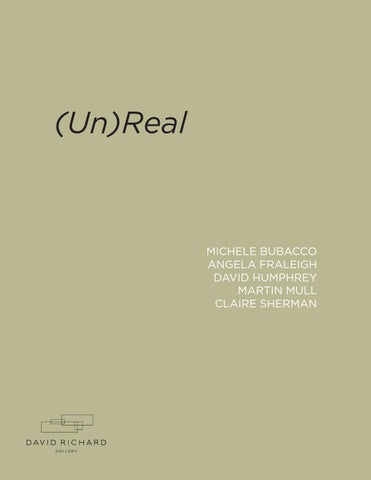 I could not say what I admire most, the naturalistic presentation of an imaginary world, rendered believable through a minute precision of images, or the daring turn to the mysterious. André Gide 2

The (Un)Real World – Contemporary Transformations Since the introduction of the discipline by Winckelmann in the 18th century, art history has been burdened with the requirement to categorize and chart aesthetic developments in a linear manner. This formalist approach demands that art be forever seen as striving to be upwardly progressive, with milestones marking the achievements: late Hellenistic sculpture, Renaisance painting, Impressionism, Non-objective art, Conceptualism, and so on. Art is, unfortunately (or fortunately), a much messier enterprise, that flees from definition and rails against being pigeon-holed. The modern era has placed many more tools into the paint-box and, while offering the greater temptations of creative freedom, has given birth to challenges that each practitioner must engage to achieve the desired end. We, as observers, documenters, historians, et alia, have undertaken the ridiculous and ultimately futile task of verbalizing something that is visceral and visual. In the 1950s there was a trend in popular music to take the more accessible refrains from the classics and apply ‘moon, June, spoon’ lyrics. While we hope to avoid that here, we suspect that one particular artist in this exhibition might actually like it. We shall leave it to the reader to guess which one. The artists presented here – Michele Bubacco, Angela Fraleigh, David Humphrey, Martin Mull, Claire Sherman, - all take the world around us as a point of departure, subjecting these observations to an inner rigor that leads down different paths and to unexpected surprises. This exhibition undertakes the challenge to chart this divergence and to find commonality amongst some very interesting and disparate painters. It would be much easier to, say, to bring a group of abstract painters together and speak of the various formal approaches. It is much harder to communicate to the viewer the thread that ties these artists together. Let it suffice to say that the real world (whatever that may mean) is merely the first leg of the journey. The enigmatic imagery of Martin Mull’s compositions is like the events in a John Cheever story gone horribly, horribly wrong. The idealization of Post-War American life crashes up against a starker reality that disturbs what we think we know and what we remember. It is as if Ozzie and Harriet were riding a really bad acid trip. However, that discord resides only in the mind, fascinating as it is to play with it. What makes it work, what holds it together, are the formalist aspects of the composition. Mull’s paintings are not mere surrealist mash-ups, but carefully planned painterly structures. It’s work that would even give Wöfflin pause. The clash of implied narratives is resolved on the picture surface by planes of color matched by areas rendered in half-tone. It is a devilishly clever structural device. A different sort of dichotomy is to be found in the works of David Humphrey, a painter who has created his own iconography. Something familiar, recognizable – in the form of human beings, animals or an object or setting we think we know - is often the point of entry into the composition. The viewer is then led into a more gestural, abstract element that ties the painting together through color and form. There is imbalance, discord and tension moving back and forth across the suface.

Humphrey is not only a painter who thinks about painting, but one who has extensively and seriously written about the subject. Discoursing with and understanding other practitioners requires an ontological vocabulary that ultimately infuses his work, making viewer participation the ultimate goal. Angela Fraleigh’s new body of work draws upon Baroque and Rococo paintings, soft, delicate renderings of mythology and the boudoir where the female form served as an objectified element. Fraleigh excises these female figures from the original compositions, removing them from the original narrative and their imposed eroticism. By doing so she gives them a new and different life. They are no longer passive figures, but have a presence in an environment wholly their own and with a new story to tell. But Fraleigh is more than illustrating a new tale. The drawing is imbued with surety and confidence and the painted surfaces are lush and palpable. These are rich, beautiful and jewel-like works. Claire Sherman belongs to that great tradition of American landscape painters, such as Thomas Cole and Frederick Church, who, influenced by Alexander von Humboldt, sought to explore the heroic and sublime elements of nature. Unlike these antecedents who wished to capture its sweeping awe and power in expansiveness, Sherman finds it in the details. A rock face, the lattice-like patterns of tree branches, the texture of snow and the tiny leaves of bushes inform the geometry within Sherman’s compositions. Many landscape painters would be content to leave it at that, but Sherman harnesses this geometry and sends it into pure abstraction. Those interwoven branches become gestural marks across the canvas and the natural indentations of a hillock approach color-field painting. We mentioned details earlier and, for some, that’s where god resides. In Sherman’s case, that’s where good painting begins. The somber palette and its aggressive, if reductive, application in Michele Bubacco’s paintings have been described by others as ‘existentialist.’ If this term is used as an historical convenience as it is for Post-War European artists, then that may be so. But if by definition it is used to convey the concepts of individual free will the use of consciousness to determine meaning, then another description is perhaps in order for Bubacco’s figures – alone or in groups – seem compelled by other-worldly forces to behave as they do. Ambiguous sexuality, implied violence and visible chaos go hand-in-hand. There is an impenetrable darkness inherent in these paintings as the protagonists move through a choreography not of their making. The artists exhibited here have dug deeply into the afore-mentioned paint-box and in formal, gestural and intuitive constructions present light, dark, hope, desire, amusement and plenty of what the filmic King of Siam was wont to say: ‘puzzlement.’ Howard Rutkowski Mary Dinaburg New York

Michele Bubacco has a raw, gestural approach to painting, with deliberate strokes and a reductive palette that captures the anguish and despair of the figures. The scenes are chaotic, some psychologically disturbing, with imagery that ranges from sexually ambiguous to somewhat aggressive that creates intrigue and mystery with respect to the character’s orientation and situation. Bubacco was born in 1983 on the island of Murano in Venice, Italy and currently resides in Vienna, Austria. After studying painting with the Venetian artist Alessandro Rossi from 2002 until 2004, Bubacco opened a studio in Murano and began to take part in exhibitions in Italy and throughout Europe. A major highlight was the mounting of the monumental painting “Crimson Orchestra” at a satellite exhibition of the Venice Biennale in 2011. Angela Fraleigh’s newest work reconsiders the classic female nude by taking figures from Baroque and Rococo paintings and reexamining their surroundings, attire and gaze. Her paintings are more than sumptuous and beautiful, they also touch upon feminist concerns. By taking the figures out of their objectified and sensual roles, she reveals different possible readings and narratives for the female characters, giving them individuality and confidence. Fraleigh earned her MFA from Yale University and her BFA from Boston University. She has exhibited widely at numerous venues across the US including the Kemper Museum of Contemporary Art, Kansas City, MO, and the Museum of Fine Arts Houston, TX. Fraleigh was awarded several artist-in-residence programs, including the CORE program, MFAH, TX, the Bemis Center for Contemporary Art in Omaha, NE and Frans Masereel Centrum in Kasterlee, Belgium. Emerging in the 1970s, David Humphrey’s paintings come out of Postmodernism. They are hard to categorize with their combination of cartoonish figures, Pop Art sensibility, Surrealism and gestural abstraction. Yet, his unique visual language brings figuration and abstraction together to challenge perceptions and assumptions. In his 35 year career, Humphrey has exhibited throughout the US, Canada and Europe. He has been a recipient of the Rome Prize, American Academy in Rome in 2008, John Simon Guggenheim Memorial Foundation Fellowship in 2002 and two National Endowment for the Arts Fellowships in 1987 and 1995. Humphrey’s artworks are included in the permanent collections of: Museum of Art, Carnegie Institute, Pittsburgh, PA; Cleveland Center for Contemporary Art, OH; Denver Art Museum, CO; Metropolitan Museum of Art, NY; Museum of Fine Art, Boston, MA; and Walker Art Center, Minneapolis, MN. The photo real paintings of Martin Mull critique the idealized Post-War American dream of a safe and happy home life. Those who had the good fortune to realize that dream are paired in his paintings with those who did not, by using a clever device of juxtaposing the two extreme lives in full color versus half tones. Mull studied at the Rhode Island School of Design and has had numerous solo exhibitions across the US. His artworks are included in the permanent collections of Los Angeles County Museum of Art, CA; The Metropolitan Museum of Art, New York, NY; The Brooklyn Museum, New York, NY; Walker Art Center, Minneapolis, MN and The Whitney Museum of American Art, New York, NY, among others. Claire Sherman’s paintings are rooted in the American landscape tradition. However, she does not try to capture the grandure and heroic scale of the outdoors in her artworks. Instead, she focuses on the details in the trees and rocks, transforming them into abstractions that allow the viewer to get lost in the building blocks of the landscape and open another world of possible readings. Sherman studied at the University of Pennsylvania and earned her MFA from The School of the Art Institute of Chicago in 2005. She has exhibited across the US and in Europe with 14 solo exhibitions and her work included in numerous private and corporate collections. Sherman has received many fellowships and residencies and her artwork reviewed in the New York Times, Brooklyn Rail, Hyperallergic and Chicago Tribune, among others.