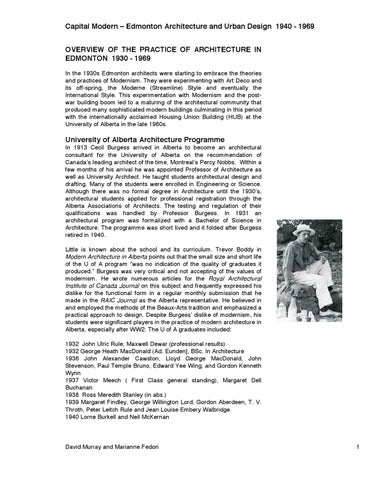 Capital Modern – Edmonton Architecture and Urban Design 1940 - 1969 OVERVIEW OF THE PRACTICE OF ARCHITECTURE IN EDMONTON 1930 - 1969 In the 1930s Edmonton architects were starting to embrace the theories and practices of Modernism. They were experimenting with Art Deco and its off-spring, the Moderne (Streamline) Style and eventually the International Style. This experimentation with Modernism and the postwar building boom led to a maturing of the architectural community that produced many sophisticated modern buildings culminating in this period with the internationally acclaimed Housing Union Building (HUB) at the University of Alberta in the late 1960s.

University of Alberta Architecture Programme In 1913 Cecil Burgess arrived in Alberta to become an architectural consultant for the University of Alberta on the recommendation of Canadaʼs leading architect of the time, Montrealʼs Percy Nobbs. Within a few months of his arrival he was appointed Professor of Architecture as well as University Architect. He taught students architectural design and drafting. Many of the students were enrolled in Engineering or Science. Although there was no formal degree in Architecture until the 1930ʼs, architectural students applied for professional registration through the Alberta Associations of Architects. The testing and regulation of their qualifications was handled by Professor Burgess. In 1931 an architectural program was formalized with a Bachelor of Science in Architecture. The programme was short lived and it folded after Burgess retired in 1940. Little is known about the school and its curriculum. Trevor Boddy in Modern Architecture in Alberta points out that the small size and short life of the U of A program “was no indication of the quality of graduates it produced.” Burgess was very critical and not accepting of the values of modernism. He wrote numerous articles for the Royal Architectural Institute of Canada Journal on this subject and frequently expressed his dislike for the functional form in a regular monthly submission that he made in the RAIC Journal as the Alberta representative. He believed in and employed the methods of the Beaux-Arts tradition and emphasized a practical approach to design. Despite Burgessʼ dislike of modernism, his students were significant players in the practice of modern architecture in Alberta, especially after WW2. The U of A graduates included: 1932 John Ulric Rule, Maxwell Dewar (professional results) 1932 George Heath MacDonald (Ad. Eunden], BSc. In Architecture 1936 John Alexander Cawston, Lloyd George MacDonald, John Stevenson, Paul Temple Bruno, Edward Yee Wing, and Gordon Kenneth Wynn 1937 Victor Meech ( First Class general standing), Margaret Dell Buchanan 1938 Ross Meredith Stanley (in abs.) 1939 Margaret Findley, George Willington Lord, Gordon Aberdeen, T. V. Throth, Peter Leitch Rule and Jean Louise Embery Walbridge. 1940 Lorne Burkell and Neil McKernan 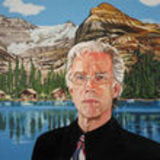 Overview of Postwar Architecture in Edmonton

Overview of Postwar Architecture in Edmonton