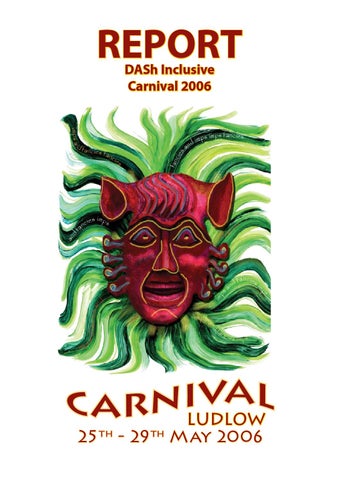 an d f ancies a

To produce an inclusive community carnival, which built on the successes of Carnival 02, 03, 04 and 05.

To develop the partnership with ‘Festive Ludlow’, Ludlow Assembly Rooms and the Green Festival

To present Carnival as an accessible artform

To introduce the Cultural roots of Carnival

To employ Disabled Artists as part of the Carnival Team

How these were achieved To produce an inclusive community carnival, which built on the successes of Carnival 02, 03, 04 and 05 This year the Green Festival became partners in the Carnival. This was a big development for the Carnival, with the Green Fair held on Carnival weekend, the Carnival publicised in the Green festival brochure, a run through the Carnival dancers and band at the Green Fair and a strong Green element in the procession with horses and carts. The link with the Green Festival will continue, but they will be less active partners in the Carnival. To involve more young people in the work of DASh, particularly young Disabled People. We continued to build on our relationships with local Schools, which led to the high numbers of young people attending the workshops. This has led to a core group of Young People who have been a part of the last three Carnivals. Ludlow Secondary School acted as a base for a day’s workshop, which allowed us to access Secondary students (aimed particularly at Disabled Students) and 6th years from St Laurence’s Primary School. We will hope to continue this involvement of the Secondary School. To develop the partnership with ‘Festive Ludlow’, Ludlow Assembly Rooms and the Green Festival The overall numbers of Disabled people involved dropped, but the big improvement over the last two Carnivals, was the consistency of their involvement. They attended several workshops and came to the procession. This was a big breakthrough with the Day Centres, who are taking the event more seriously and dedicating staff time to it. 20% of the People involved in the project were Disabled People. The numbers dropped

from 2005, because Arty Party were unable to be involved. To present Carnival as an accessible artform We worked hard to maintain a high level of accessibility, with an Access Worker- Katy, who is an Artist as well and made all areas of the Carnival as accessible as possible. We were unable to offer Carnival buses this year, due to the funding for transport having ended. To introduce the Cultural roots of Carnival Mary Ann Roberts, who is the ‘heart’ of the Carnival provided background to her roots in Trinidad and we provided a table of source material. We will look to develop this area further. To employ Disabled Artists as part of the Carnival Team We employed Tanya Raabe (Disabled Artist) and Etzuko as part of the Carnival team. Tanya’s role included ensuring that Disabled participants had an equal experience. Etzuko came for three days and worked in all areas of the Workshops. To have fun Yes we had fun

Marketing The Carnival was marketed in the following ways: Flyer and Poster. 10000 flyers and 200 A4 posters were produced by DASh’s inhouse design team. The print was very accessible and provided clear and concise information, especially as the event had many strands. This publicity was distributed : Through Ludlow Assembly Rooms mailing to 4000 addresses, plus local shops DASh’s mailing list to 300 addresses Hand delivery in Ludlow, Church Stretton, Craven Arms, Bishops Castle and Cleobury Mortimer Direct mail to ten local schools, for each child to take home South Shropshire libraries Audiences Central’s distribution of 8000 flyers. This covered Shropshire, Herefordshire and Worcestershire Local Press. Through a small piece in the Ludlow Papers we recruited 2 Brass players, which led to the creation of a Brass section to the Carnival band The Green Festival brochure

The effect of the large distribution, was to attract a lot more people as audience on the Carnival day. We also split the costs with Festive Ludlow for the print design and the Audienceâ&amp;#x20AC;&amp;#x2122;s Central distribution, which saved both organisations money Statistics( Figures for 05 in brackets) Carnival Workshops - 6 days

On the Road on Carnival day

In 2005 we only recorded Children up to 14yrs 111 attended In 2005 30 Children went on the Road The numbers of Disabled People on the procession dropped dramatically, due to Arty Partyâ&amp;#x20AC;&amp;#x2122;s absence this year. Audience 3000 People

The Future and Recommendations This year the partnership developed and became more supportive, with the Assembly Rooms distribution and reduced hire costs for the Workshops, with co production of Publicity. The relationship will be helped with the appointment of a new Arts Officer for South Shropshire- Jenny Henrywood, who has a background in Carnival and has already offered support to the Carnival committee. The Launch party this year had a crowning ceremony, which should be continued next year. We Involved Peta in the workshops. She leads Samba groups in South Shropshire. We will continue to do this next year. We will start recruiting Brass players 3 months before the Carnival and hope to have a bigger Brass section in 2007. We will be doing pre Carnival work in October 06 as a Calypso project with Older People and Learning Disabled Adults. We hope this will bring new participants to the Workshops. Explore other funding streams. Funding was a big issue this year and we seriously considered only running a weekend of workshops. We looked for other premises for the Carnival Workshops in 2005/06 without success and though we are aware of the issues with the space at the Assembly Rooms, this is mitigated by the hospitality, support and accessibility of the Assembly Rooms. Evaluate the Support/Access workerâ&amp;#x20AC;&amp;#x2122;s role