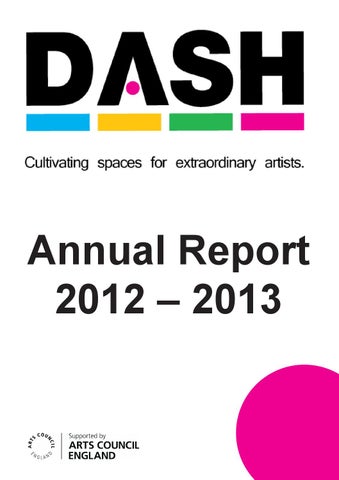 A note from the Chair: This year has seen great changes at DASH. What seemed a massive blow to the organisation was turned around by the resilience and commitment of the staff and directors of DASH. DASH is now stronger than ever and is growing daily. There are so many exciting developments in the pipeline for 2013-14 and we just canâ&amp;#x20AC;&amp;#x2122;t wait to get started. Yvette Priestley - Chair

Primary achievements: 2012/13 has been a year where DASH has developed its resilience, at a time of great changes within the organisation and the wider arts world. We moved our base from the DASHSPACE to sharing an office at the HIVE in the centre of Shrewsbury. This has been a 100% positive experience for the organisation and the staff; most importantly, dramatically reducing our outgoings. DASH was awarded transition funding to support the organisationâ&amp;#x20AC;&amp;#x2122;s development from being an RFO to a NPO. The process has taken DASH from a low point in early 2012 where we had lost 30% of our ACE funding and knew this would lead to staff redundancies and loss of the DASHSPACE - to a positive place where we now aim to be a leader within Disability arts. In 2012/13 we have rooted the IN project, through cementing our relationship with the 5 galleries involved in the partnership. This has been at a time of great change and uncertainty for all the partners, with staff changes and redundancies. Despite this, all the partners have continued to be fully committed to the IN project and devote a substantial level of staff time and resources. This commitment means that IN is on track to having a high impact within the visual arts. During a year of great change for DASH we have been very successful in attracting new sources of funding. We are now receiving revenue funding from our local authority (Shropshire Council) which is allowing us to develop our work with local artists. We have developed our role as project and financial managers for individual artists, including managing a grant to a disabled artist by Arts Council Wales. This has brought in new streams of earned income. We have also developed applications to Arts Council Wales and other foundations which promise to deliver extra funding in 2013/14.

Artistic programme: Our artistic programme has incorporated amongst other things: • IN – Disability Arts IN the mainstream. • Tu Fewn. • M21 • Disability Art and Equality training. • Visual arts workshops. • Mentoring for artists. • Shropshire Inclusive Dance. Between 1st April 2012 and 31st March 2013, 100% of our work was disability focused. For unticketed events during this period we estimate that the participants came from; Shropshire district Telford &amp; Wrekin Not known

During 1st April 2012 and 31st March 2013, we held 10 exhibitions, across 24 days. The estimated attendance of these was 2000. 10 of the exhibition days were made accessible by British Sign Language and 14 via Audio Description. 14 of the exhibition days took place outside England, with the estimated attendance 1500. DASH produced one new book for the year 2012/13 with a distribution of 200. Our workshop and learning participation sessions for those aged 20+ years, were attended by 50 people.

The IN project: 2012/13 was the first year of IN (the foundations were laid in 2011/12). The IN project is built upon developing a strong working partnership between five galleries and DASH. This partnership is created and developed through the five galleries (working) meetings - which happen every four months at the five galleries. At the meetings the details of IN are developed and discussed – i.e. each commission, marketing, branding, the Symposium and training in accessible design are run. The three meets have been at the mac, the Public and the Herbert. This has allowed the host gallery to provide a tour of their building and current exhibitions. During 2012/13 two Disabled artists have been commissioned, at the Public and the Herbert. The Public: The gallery advertised the commission and six artists were shortlisted and interviewed. Artist Zoe Partington-Sollinger was selected to create ‘Sound Canvas’ an interactive sound and light piece, with sampled sounds. The Herbert: The gallery wanted to continue a relationship with Dale V Marshall, a street artist who is developing his work as contemporary gallery art. We have met with Dale, who is based in Mid Wales – and have had studio visits etc. We’re now providing mentoring to him. IN is being externally evaluated and each gallery and DASH will self evaluate. The Audience data collection toolkit which was piloted during Outside IN (2010-2012) has been shared with the five gallery partners of DASH’s IN project.

Sound Canvas launches at The Public.

This has developed into a large scale 3 year pilot project, with 3 commissions in galleries and arts organisations. We have successfully fundraised £30,000 from Arts Council Wales and are awaiting the results of applications for £30,000 of matched funding. Tu Fewn will start in November/December 2013 and will run until 2016. The project is being led by DASH and Disability Arts Cymru (DAC). We have set up a selection panel consisting of DASH, DAC, a Wales based Disabled artist (Chris tally Evans), a visual arts expert based in Wales (Emma Geliot) and a member of the DASH Board. There is a separate mentoring strand being set up with g39 in Cardiff. Tu Fewn will be externally evaluated and is a pilot for a larger scale project in England planned for 2015/18.

M21: M21 (The Medieval to the 21st Century) was our Live art Unlimited funded project, which was part of the Cultural Olympiad. It involved commissioning eight new pieces of Live Art from UK and Croatian Disabled artists, which were shown in Much Wenlock. During 2011/12 all the detailed planning and organisation happened, with the event realised in May 2012. This has been one of the largest projects that DASH has organised and promoted so far. M21 brought together the history of this small Shropshire town with the politics of live art to confront the reality of modern rural living. Renowned disabled artists Tanya Raabe, Alan McLean, Simon McKeown, Sean Burn, Noëmi Lakmaier, Ann Whitehurst and the Disabled Avant-Garde explored climate change, country living and historic practices through a disability aesthetic. They defied tradition, resisted definition and asked awkward questions. M21 broke the rules about who is making art, how they are making it and who they are making it for. www.m21dash.org

M21 event for Cultural Olympiad in Much Wenlock.

Marketing and profile: The DASH e-newsletter, is very successful in informing our audience about DASH’s work. At the end of March 2013 there were 420 recipients, an increase of 243 since April 2012. On average 35% of the recipients open the email. According to mailchimp.com this open rate is “17.2% higher than your industry average and 8% higher than this list’s average.” Transition funding enabled us to employ a consultant to compile a digital strategy for DASH and the website will be redeveloped and relaunched, in line with this digital strategy. Arts Council: 2012/13 has been a year of great change for DASH. During 2012/13 the whole organisation went through re-evaluation as part of our transition funding. One part of this process was the development of a fundraising strategy with an external consultant. The outcomes from the strategy were that in the short term, DASH should focus on trusts and foundations and look at individual giving and legacies in the longer term. During 2012/13 we have brought in significant amounts of earned income through project and financial management of an Arts Council Wales grant to a Disabled artist and financial management of an associate artist of DASH. Our funding agreement with ACE is based on DASH bringing in 20% of non ACE income, including earned income and local authority funding. We have now found that ‘contributed income’ is only trusts, sponsorship and donations.

This exclusion of earned income has meant that it looks as if we have missed our KPI target by a long way, but if earned income and Local Authority funding were included in contributed income then this would amount to £31,000 and this would be 44% of ACE funding. Year 2012/13 (actual) 2013/14 (projected) 2014/15 (projected)

During 2012/13 we have been making applications to trusts and foundations and Arts Council Wales. Applications to the Colwinston trust, Esmee Fairbairn, Clore Duffield and John Paul Getty were all unsuccessful. Our Arts Council Wales bid was successful totalling £30,000 and will be within the 2013/14 accounts. We currently have applications pending to the Foyle foundation, CHK Charitable Ltd and Paul Hamlyn Foundation. We expect (and need to if we are to start all the work we have planned) in 2014 onwards to bring in significant amounts of funding through trusts. Work has started on a NESTA R&amp;D bid to develop a digital data collection game. Organisation development: As part of the organisational development plans, DASH are planning to hold arts workshops throughout the county. Through running workshops over several years at DASH, we know that transport for Disabled people is a huge issue for those living in rural areas. The Art Bus would take Disabled and Non-Disabled artists and artworks to outlying towns and villages of Shropshire. The workshops would then make use of existing community halls, providing these towns and villages with income and activity, vital to economic and social welfare and culture. The Art Bus would also be able to pick up some participants who would be unable to access the workshop. Initially DASH would be using current provision eg: Dial A Ride, for the ‘Bus’ part of this project. To ensure DASH has enough tutors, that have the same ethos as DASH, to deliver these workshops throughout the county, DASH will deliver equality training for artists. This training is being funded by Shropshire Council.

Equality Action: DASHâ&amp;#x20AC;&amp;#x2122;s core values are built upon the principles of equality of opportunity for all sectors of the community to ensure that Disabled people are able to take their rightful place in Society. There are some pressing current equality and diversity concerns, linked with the wider economic picture and its impact on particular communities. Among these, DASH sees disabled people and older people facing huge pressures and disadvantage. Underpinning this impact are wider class and socio-economic considerations; again impacting disproportionately on particular communities. For the period 1st April 2013 to 31st March 2016, DASH therefore intends to focus its limited resources primarily (but not exclusively) on meeting the needs of disabled and older people within its client and service user groups and working to ensure equality of access for them to its services and resources. Environmental policy and sustainable action: We have now produced an Environmental action plan - this process was interesting. We have looked at what impact we can have on our carbon footprint and whilst these are very limited, one area we can be more sustainable around is travel. We are already using public transport, particularly rail for more of our journeys and sharing travel where we have to use cars.

A participant completing a portrait.