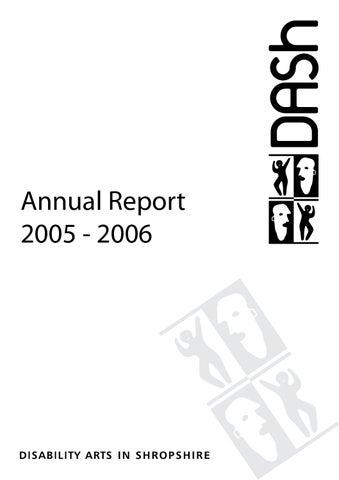 Introduction A year at DASh, April 2005 - March 2006 This has been a year of development for DASh. The effects of having three staff has shown with the extra work that has happened in 05-06. We are now looking forward to a year where we will be building on these developments. A worrying development over this year has been the demise of Disability Organisations in the West Midlands, Shropshire Disability Consortium, Disability West Midlands, Birmingham Coalition of Disabled People and West Midlands Disability Arts Forum. This leaves DASh in a very unsupported environment in the region.

VISUAL ARTS Digital Now II -- Difference 2005-2006 Digital Now II brought together 16 disabled artists in total. 11 Artists created an exciting challenging body of digital art based on the theme of ‘Difference’. Five disabled artists took part as Email ‘Buddies’. DNII was set up to concentrate on developing ideas and producing artwork rather than developing software skills set as digital Now 1 did. The artists were introduced to experimental visual art processes that stimulated their creative thought processes. The artists then took their own direction and interpreted the theme of ‘Difference’ in very diverse ways. This project was designed to create partnerships and networks between artists from around Shropshire, nationally and around the world. Still Image group Each artist created very different interpretations of the theme that tuned into their own level of artistic ability and area of expertise. Moving image group The brief for the artists was to make a 1 minute film that was a series of shots, sounds, images that did not necessary make sense when they where edited together. Each artist interpreted the brief in a very diverse way creating three films that looked and sounded very ‘Different’. Exhibitions and festivals Digital Now II ‘Difference’ has been exhibited at Qube, Oswestry, Old Market Hall, Shrewsbury. Darwin Shopping Centre, Shrewsbury. Moving Image Art Films section at Borderlines Film Festival, Courtyard, and Hereford. And entered into the Disability Film Festival 8 for Dec 2006

VISUAL ARTS Artist Development Team (ADTeam) The ADTeam was a pilot project designed for Disabled Visual Arts to develop arts professional development and mentoring. Initially four artists were recruited but one left due to ill health. We continued with three artists. The artists covered a diverse level of area within visual arts and were at variable levels in their artistic career. Each one needed very different thing from the ADT. So it was a mater of working closely on a one to one basis with them initially to focus their direction. The artists were recruited through leaflet distribution and joined the course on a first come first served basis. ADT worked on two levels. 1. Individual Artistic and Personal Development 2. The group exhibition. The project lasts for nine months and lead to a group show called â&amp;#x20AC;&amp;#x2DC;Unleashedâ&amp;#x20AC;&amp;#x2122; at the Belmont Arts Centre, Shrewsbury. The ADTeam has shown great success of individual support to Artists and we already have a waiting list for the second course, which will be run in 2006

VISUAL ARTS Visual Art Slab Visual Art Slab took place at the Walsall Art gallery April 2006 Twelve professional/practicing disabled visual artists were invited to the visual Art Slab to discuss issues around the barriers that they face as disabled artists. Through the process of making sketch-book ideas on the day the artists were asked to come up with workable solutions that could be put it to practice by individual artists or by arts organisations as good working practice. Conclusion In the contemporary art world of 2006 it seems that as disabled artists we are still fighting to be recognised and have our art valued by the mainstream. Disability art struggles to be on the agenda and be programmed into high profile art galleries exhibitions regularly. As an audience art that has disability context is also ignored and dismissed.

PERFORMING ARTS AND FILM Performing Art Slab The Patrick Centre, Birmingham Hippodrome Aims of the ARTSLAB  How to get our work shown in the Mainstream Arts World  How to develop our careers as Disabled Artists  Identify the barriers that stop these happening  Come up with practical solutions to the identified barriers, which can be put in place by Venues and promoters  Produce a DVD, made from footage of the two artslabs, which can be distributed to venues , Arts organisations and promoters The Performing Artslab looked at the Barriers and Solutions, by creating Pieces of Forum Theatre as an Artistic interpretation of these. It was essential that we had someone to lead the day who was inspirational and an experienced workshop leader. Mat Fraser was the perfect choice, with Cerrie Burnell co leading the day. Some conclusions we came up with were:  The Disability Arts movement is weak, particularly some Disability Arts Forums. These need to become strong proactive organisations supporting and developing the work of individual Disabled Artists  Name and shame ‘bad’ Arts centres/Venues Individual Artists need to use :  The DDA  The DAFs  ACE  Mentors

PERFORMING ARTS AND FILM Carnival The Ludlow Carnival is DASh’s main public event of the year. There continued to be a high percentage of participants in the workshops and ‘on the road’ that are Disabled people; 24% at the workshops and 60% on the road. The high percentage on the Carnival day was due to ‘Arty Partys’ continued involvement. Day Centres were less involved this year and no Centre came on Carnival day. There were a large number of Disabled people accessing the workshops independently. Through grant funding we were able to offer free accessible buses from Shrewsbury, Bishops Castle and Cleobury Mortimer, plus a free shuttle bus to the fun day on Carnival day. Due to no take up, we only ran the Shrewsbury and the shuttle bus. We continued to build on our relationships with local Schools, which led to high numbers of young people attending the workshops. This has led to a core group of Young People who have been a part of the last two Carnivals. We had hoped that we would involve more young Disabled People through the Secondary Schools, but we were let down by ‘Institutional Inertia’ The Carnival will be growing in 2006 with the involvement of the Green Festival.

PERFORMING ARTS AND FILM Borderlines Film Festival In March we ran ‘Close Up’ a day of Disability related films as part of the Borderlines Film Festival. This happened at the Courtyard Centre for the Arts. In the morning we showed work by regional Disabled Film makers: • Justin Edgar showed five short films • Jane Roberts, Zaim Chimna and Dave King showed their short films from Digital NOW II • ’A day in the Life’, which was a DASh commission with Leominster MIND, where nine people took disposable cameras and recorded a day in their life. These were then turned into slide show/films with music soundtrack. Each film maker took part in question and answer sessions after their films were shown. The morning ended on an international theme with a short pop video from Australia made by a group of young Learning Disabled People. After lunch ‘Everytime you look at me’ was screened, which was a prime time BBC 2 romance starring Mat Fraser and Lisa Hammond. Mat came up from London to talk about the film and the position of Disabled actors working in mainstream film and TV. In the early evening Murderball was shown, which is a film about wheelchair Rugby. 80 people attended the event. DASh and Borderlines will be looking at developments for the next two years, which will include lectures and commissioned films.

PERFORMING ARTS AND FILM In Yer Face and The Last Freakshow Saturday June 18th from 2-4pm ‘In Yer Face’ Street Festival on Pride Hill. Three different performances happened over this two hour period: • ‘The Last Freak Show’ performed a twenty minute street show twice. The show included music, song, dance and comedy. A large crowd gathered to be entertained, shocked, bemused and confused. • Blue Eyed Soul created a new piece of dance for the event. This involved six different short ‘dance interventions’. The intention was that the onlookers would not see they were performing and would be drawn in to the interaction between the three dancers. This certainly happened with a large number of people stopping to find out what was going on. • The Three Colours-Live Art piece. Three DASh visual artists created a piece of Live Art, which consisted of each performer being made up in a different colourred, blue and green and each performer only spoke words related to their colour. They then painted a picture using their colour. This piece created a lot of interest. In the evening two performances of ‘The Last Freak Show’ were performed at Belmont Arts Centre. This was the last night of a National tour by this company of predominantly Disabled Actors. The show was a ‘promenade’ performance and had an audience limit of 40 people. The first show sold out and had 35 people in the second one. The show attracted not only DASh regulars, but also people new to DASh and from as far as London and Walsall.

PERFORMING ARTS AND FILM Co-promotions and Travel Co-promotions We started offering to co-promote Disability Art shows this year and co-promoted the following shows: -‘Jim Davidson’s guide to equality’ by Lawrence Clark. This was a promotion by DASh, Bridgnorth District Council and the Edge Arts Centre, attended by 80 people -‘Rickety Tickety Tin’ by About Face. This was a promotion by DASh and Belmont Arts Centre, attended by 12 people. BAA and NOSHAA North Shropshire Arts for All (NOSHAA ) finished this year. The local council ceased funding an arts officer and subsequently there was little promotion of the scheme. We only had one booker and we knew it would be hard to find funding for 06-07 even if the project was successful, but with the lack of take up and the reasons above we have decided to close NOSHAA.

Meanwhile Bridgnorth Arts for All (BAA) is surviving. A development in 05 has been the use of BAA by members of Innage Lane Resource Centre, who are traveling independently. We have sent a questionnaire out to users of BAA to find out how we can develop the scheme.

MARKETING Website and Print Website The website was updated to include images from Ludlow Carnival, Digital Now II and In Yer Face. The three artists’ films from Digital Now II were also added on an additional page. News, events and the PDF newsletter were updated on a monthly basis. In January 2006 MailOut magazine featured a short article on the DASh website in addition it stated the newsletter was “easy to read and well laid out”. Print All promotional print materials have been designed inhouse, which has significantly decreased the marketing costs. This saving has meant that larger quantities and better quality print can be purchased.

The above figures show a significant raise in income and expenditure for the period April 2005 to March 2006. This was the first full twelve month period with the staffing levels increased from one to three.

3000 audience In Yer Face and The Last Freak Show

The annual report for DASH Disability Arts for the period of 2005/2006.