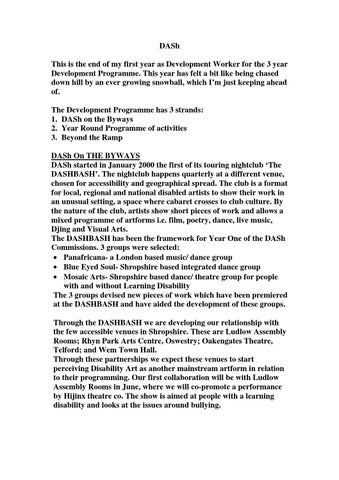 DASh This is the end of my first year as Development Worker for the 3 year Development Programme. This year has felt a bit like being chased down hill by an ever growing snowball, which I’m just keeping ahead of. The Development Programme has 3 strands: 1. DASh on the Byways 2. Year Round Programme of activities 3. Beyond the Ramp DASh On THE BYWAYS DASh started in January 2000 the first of its touring nightclub ‘The DASHBASH’. The nightclub happens quarterly at a different venue, chosen for accessibility and geographical spread. The club is a format for local, regional and national disabled artists to show their work in an unusual setting, a space where cabaret crosses to club culture. By the nature of the club, artists show short pieces of work and allows a mixed programme of artforms i.e. film, poetry, dance, live music, Djing and Visual Arts. The DASHBASH has been the framework for Year One of the DASh Commissions. 3 groups were selected:  Panafricana- a London based music/ dance group  Blue Eyed Soul- Shropshire based integrated dance group  Mosaic Arts- Shropshire based dance/ theatre group for people with and without Learning Disability The 3 groups devised new pieces of work which have been premiered at the DASHBASH and have aided the development of these groups. Through the DASHBASH we are developing our relationship with the few accessible venues in Shropshire. These are Ludlow Assembly Rooms; Rhyn Park Arts Centre, Oswestry; Oakengates Theatre, Telford; and Wem Town Hall. Through these partnerships we expect these venues to start perceiving Disability Art as another mainstream artform in relation to their programming. Our first collaboration will be with Ludlow Assembly Rooms in June, where we will co-promote a performance by Hijinx theatre co. The show is aimed at people with a learning disability and looks at the issues around bullying.

Transport has always been a big issue for DASh, in getting audiences to and from events. This has been an even bigger issue for the DASHBASH as it runs till 1am. To address this problem DASh has instigated the DASHBUS, a fully accessible coach ( run by Boultons coaches ) to take people to and from DASh events. We have also developed links with local transport providers to run door to door services. We still have much to learn and look forward to developing links with Dial-A-Ride to organise county wide accessible transport for the DASH 2000 Festival. Year Round Programme of Activities During 1999 we have set up an Artists Database of Shropshire based disabled artists and it became clear that the majority of artists linked to DASh are Visual Artists, so this has been the area we have concentrated on for workshops and residencies.  In November/December 99 two Shropshire disabled visual artists created the DASh Banners. These banners are based on the work of a disabled painter working from Loudwater Studios. These banners are being used to decorate spaces and are being hired out by other organisations as an example of Contemporary Visual Arts.  During this year 16 disabled artists will be working with 4 lead artists to create collaborative artworks on the theme of ‘Borders’. This project will introduce contemporary art practice and develop artists’ work. Beyond the Ramp The DASHMARK which will be an award to Arts venues and promoters which will show that this is a venue of excellence, which has fulfilled access requirements and is welcoming to disabled people, was officially launched on the 7th April and will be piloted in a selected venue during this year. The DASHMARK committee has been meeting regularly and consists of: Disabled Artists; Access Groups; Access Officers; and District Councillors. DASh Networker DASh has been granted £20000 from the Arts Council’s New Audience fund to run a 9 month research programme on Disabled People as an Arts audience. This project will be starting in June 2000 in Bridgnorth District and we look forward to detailed information being collected on:

 Accessible Rural Transport systems, which can be applied Shropshire wide  Access and Arts venues  Accessible information from Arts venues  New audiences in Bridgnorth District  New forms of Evaluating art projects The results from the research will be available from March 2001 DASh Festival The DASh 2000 Festival is a collaboration with the Shropshire County Council’s SMAC 2K project and will be bringing 5 new Disability Art pieces to Ludlow Assembly Rooms on the weekend of September 15/16th . The work on show will have a national profile and will attract audiences from around the Country. DASh will be working in liaison with transport providers to offer a County wide transport service to and from the Festival. Facts and Figures DASh has a mailing list of 842 addresses, a Shropshire artists database of 75 individuals and organisations and a monthly subscribed artist mailing to 15 disabled artists ( paying £5/ year ). DASh has received funding from:  All the district councils and Telford &amp; Wrekin for the Development Programme and the festival.  West Midlands Arts for the Festival and the Borders Project.  Arts Council of England’s New Audiences fund for DASh Networker  Nationwide Trust for the Festival  Awards for All for the Borders Project Total extra funding in 99-00 ( on top of A4E Development Programme ) funding is : £24100

The annual report from the year 2000 for DASH in Shropshire.