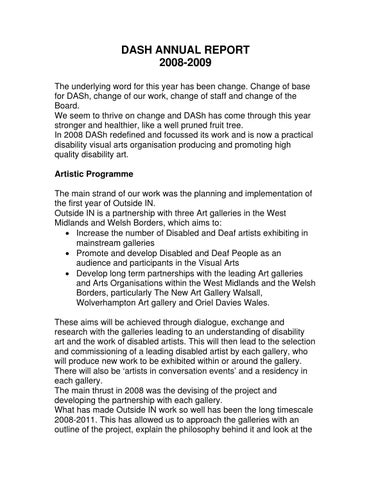 DASH ANNUAL REPORT 2008-2009 The underlying word for this year has been change. Change of base for DASh, change of our work, change of staff and change of the Board. We seem to thrive on change and DASh has come through this year stronger and healthier, like a well pruned fruit tree. In 2008 DASh redefined and focussed its work and is now a practical disability visual arts organisation producing and promoting high quality disability art. Artistic Programme The main strand of our work was the planning and implementation of the first year of Outside IN. Outside IN is a partnership with three Art galleries in the West Midlands and Welsh Borders, which aims to:  Increase the number of Disabled and Deaf artists exhibiting in mainstream galleries  Promote and develop Disabled and Deaf People as an audience and participants in the Visual Arts  Develop long term partnerships with the leading Art galleries and Arts Organisations within the West Midlands and the Welsh Borders, particularly The New Art Gallery Walsall, Wolverhampton Art gallery and Oriel Davies Wales. These aims will be achieved through dialogue, exchange and research with the galleries leading to an understanding of disability art and the work of disabled artists. This will then lead to the selection and commissioning of a leading disabled artist by each gallery, who will produce new work to be exhibited within or around the gallery. There will also be ‘artists in conversation events’ and a residency in each gallery. The main thrust in 2008 was the devising of the project and developing the partnership with each gallery. What has made Outside IN work so well has been the long timescale 2008-2011. This has allowed us to approach the galleries with an outline of the project, explain the philosophy behind it and look at the

timescale and work together to shape this. The result has been the ownership of Outside IN by the galleries and a level of partnership working which we hadn’t expected. We originally planned to work with the Ikon, but due to staff changes and a lack of understanding of the philosophy of disability art, they were not been able to commit to Outside IN, so we have replaced them with Wolverhampton art gallery, who already have exhibited a number of disabled and deaf artists. We will look to include the Ikon in the next round of Outside IN starting in 2011. We have employed a disabled evaluator to evaluate Outside IN. This evaluation will form the basis of a symposium held in 2011, looking at the processes involved in the project from DASH’s and the galleries perspectives and also form the basis of a research project. Day Centre art This work was funded by Shropshire County Council in two day centres, Helena Lane in Ludlow and Abbots Wood in Shrewsbury. These two centres are among the six new PFI centres that SCC built in 2006/2007. The two centres were very different, Helena Lane is a centre used by older people and people with a learning disability, while Abbots Wood is only used by learning disabled people. Helena Lane wanted artwork on their walls in their corridors, while Abbots Wood wanted to make their café a more interesting area. We decided that if the artwork was to have any meaning, then we had to spend time working with the disabled people at the centres finding out what art they would like to see on their walls. Both projects were very process driven and the results were a variety of work which was chosen and/or created by the users of the centres. Artists of DASh This was a selection of work by three Shropshire based disabled artists; Joy Tudor, Jenny Brown and David King which was shown at the DaDa fest in Liverpool in September 09. DASH Disability Film Fest In April 2008 we ran the fourth Disability film fest in partnership with Borderlines film festival. The main focus of the film fest was Oska Bright’s work. They ran a masterclass and the next day presented a selection of work from their film festival. We also showed a selection

of short films, an artist talk about ‘art films’ and our feature was ‘Special people’ which starred a Herefordshire disabled actor. The focus on work by learning disabled people attracted a large audience and we sold out the masterclass and the morning session of the film shows. This was a first for a showing for Borderlines film fest. DASH Website Two new artists have put their work in the gallery section of the site. One is from Shropshire and the other is from the North East of England. We need to attract more artists to the site, which our new projects should achieve this aim. DASH Artspace Our new premises were ready for us to move into in November 2008. We had managed to attract funding to equip the space for meetings and workshops. The Artspace allows DASH to reconnect with its Shropshire roots, as well as providing a new income stream. We began marketing the space in December and we have had a steady stream of bookings from January 2009, it has attracted new organisations and people to DASH and is supplying a much needed resource to Shropshire based disabled artists and organisations. We are in the process of applying for funding to build an artists studio and to hold a launch / consultation event and this will lead into an ongoing workshop programme for disabled visual artists. Organisations that have used the Artspace are: - Taking Part, a learning disability advocacy group - Artstart, Taking Part’s art group - CLASH, a new Shropshire artists group - The Community Council of Shropshire - Shropshire County Council - West Mercia Women’s Aid - Shropshire Disability Network Partnerships New partnerships have developed this year, with Outside IN. The main partnerships were:

 Borderlines Film Festival. This partnership is under review, to see the best way to develop it in the future.  Fusion Plus. DASH is an active partner in Fusion Plus’ work.  Ludlow Assembly Rooms. DASH began planning the inclusion of a half day film fest at the Assembly Rooms in 2009  The three Outside IN galleries. This is a developing partnership

Board This was a year of change for the DASH Board. The Board began the year with a number of Directors experiencing ill health or commitments in their lives, which made it difficult for them to be active Directors. This led to a number of Board meetings and events not being quorate. It was clear that there needed to be a change within the Board, so it could effectively lead the Organisation. The Board, the Staff and ACEWM agreed to hold a business development day to look at the implications of the increased funding on DASH and how best to move forward with this. This day brought up some serious issues:  There was not a clearly shared mission and aims for DASH within the Board and Staff, particularly around an understanding of the philosophy behind disability arts  The lack of commitment from a number of Board members, which resulted in a low turnout  A need to look at widening our income sources, to reduce our dependency on ACE funding To deal with these issues we resolved to:  Hold Disability Equality training (DET) for the Board.  Ask Board less committed Board members to step down and recruit new Board members, with particular skills i.e. visual arts, funding and finance, disability and equality issues, marketing.  To begin to look at new funding opportunities for DASH The DET was a successful event leading to dialogue and exchange of the issues behind DASH’s work. A number of other arts organisations bought into the day and this training is being looked at as a future income source for DASH. Four Board members resigned during the year and we successfully recruited three new Board members, which has created a strong

committed Board. Our chair Jean Green resigned during the year and Yvette Priestley became our new chair. All these changes have resulted in a more dynamic committed Board who understand DASH and their role within the organisation.

Board Members Chair Yvette Priestley Secretary Mary Hayter Treasurer Ian Wainwright Trustees Joy Tudor Ann Bennett Stephen Gibson Jonathan Hyams Ian Thomas Martin Smith Staff To complete 2008/2009 as a year of change, Tanya Raabe, the DASH visual arts manager resigned in November 2008 after being an employee for four years. For a small organisation such as DASH the resignation of a staff member is difficult as the organisation is built around the skills and personality of each of its employees. Tanya is a highly skilled artist, who is a people person. This had led our work to being very ‘hands on’. She was clearly going to be a difficult person to replace. We decided to alter the visual arts manager’s job description, in light of the requirements of Outside IN and made the post less of a practising artist role and more of a development manager role. We were very fortunate to be able to appoint Paul Darke, who brings over a decade of working in Disability art, runs the Wolverhampton Disability art fest and film fest and is very competent organiser, planner and visionary. Fundraising It was clear that fundraising would have to take a back seat during 2008, due to the amount of fundamental change within the organisation and the tasks that this change produced. In light of this

2008 was a more successful year than 2007, with fewer applications going out, but the vast majority were successful. We raised £11000 for the Artspace, the film fest our core work and the website. On top of this we began to earn income from the Artspace and this has laid a foundation for bigger bids in 2009.

The annual report for DASH from the period of 2008/2009 - Disability Arts in Shropshire.