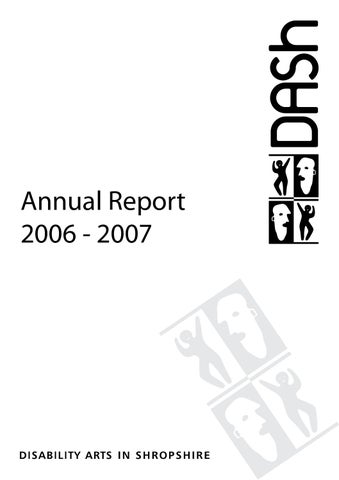 Introduction A year at DASh, April 2006 - March 2007 This has been a very busy year, with our new office space, with the positives and the negatives that this has brought, our two year visual arts development programme starting, which has brought many new artists into contact with DASh and our project work developing. We have come close to overstretching ourselves this year and we will be looking to consolidate our work in future years.

The development of accessible recruitment and selection processes for our work

The development of accessible evaluation and monitoring systems

The professional and personal development of individual artists

Raising the profile of Disabled Artists and DASh

The Aims of the Visual Arts Development programme are: • •

To provide training and employment opportunities for Disabled Artists

These aims are being achieved through the following ways: •

Multi Media project (MMP) running for six days from 30.7.07 to 4.8.07. This will involve five Disabled Artists working together to create an installation/exhibition/performance

Graphic Design Training (GDT) running from September 06 to December 07. This strand is in two parts. In the first two years three trainees will each have a twelve week placement with DASh and work with us on our accessible Graphic design work. We will then offer one trainee employment as a part time Graphic Design worker with DASh

SCREAM, which is a regional Artists led network, predominantly but not exclusively involving Disabled Artists

PERFORMING ARTS AND FILM Ludlow Carnival and Calypso This was our fifth year running a Carnival project in Ludlow and our theme was â&amp;#x20AC;&amp;#x2DC;Imps and Fanciesâ&amp;#x20AC;&amp;#x2122;. This is a very Trinidadian Old Time Carnival theme. The Imps, who were very devilish were great fun. The partnership which produces the Carnival grew this year with the Ludlow Green Festival joining the Carnival committee. This increased the breadth of the marketing and the distribution of publicity, which paid off with a much larger audience for the Carnival procession. The Procession itself became an almost 100% non motorised event, with several horse drawn vehicles. Our workshops were very successful and we had a much larger uptake than previous years. To begin a development of the Carnival and the involvement of new People, we ran a five day Calypso project in Autumn 06 at the Helena Lane Day Centre, which is used by Older People and Adults with Learning Disability. We worked with both groups separately and as the week went on we brought the two groups together. They worked on producing the song for Carnival 07 on the theme of Shopoholics and playing music, dancing and having fun.

These aims were achieved by: •

Showing the work of Disabled Film Makers from across the West Midlands region, with a focus on Herefordshire based individuals and groups, this workwas presented by the Film Makers

Showing full length feature films which either star Disabled actors or have a Disabled Director and the films were presented by either the Director or Actor if possible.

Developing local Film projects in Herefordshire and Shropshire with Disabled People and premiering this work at the Film and Disability day.

PERFORMING ARTS AND FILM Borderlines Film Festival and Oska Bright Borderlines... These were ambitious aims and objectives to achieve and we came close to achieving them all. Unfortunately we could not achieve the last objective as no funding materialised to create these local Film projects, but we are seeking funding now for next year which includes four short film projects which will premiere at the Festival. Due to the funding from the Eveson Charitable Trust we were able to extend the day, so that we started at 10am and finished at 7pm. This allowed us to programme a very large and wide range of Films and create topics to focus sessions on. It also meant we attracted a bigger and varied audience throughout the day.

PERFORMING ARTS AND FILM Day in the Life (DitL) and Co-promotions Day in the Life (DitL) The Day in the Life is a short film project, where the participants use disposable cameras to record a day in their lives and this is then turned into a short film / slideshow, with a soundtrack. We ran the first DitL in 2006 with Leominster MIND and this year we ran two DitLs. Shropshire Carers. Twelve Shropshire Carers produced DitLs and the resulting DVD was shown at the launch of the Shropshire County Council’s Carer’s strategy Grange Day Centre, Shrewsbury. We worked with six users of the Grange to produce a DitL. We used this DitL to develop the project through teaching basic film editing skills. We have funding applications out to develop DitL projects in the next year and to use the DitL as a tool for skills development with film and sound.

Co-promotions This year we only had one co-promotion, which was Fittings Multimedia’s show ‘Heelz on Wheels’, which we promoted with Ludlow Assembly Rooms. The show which was a unique blend of Disability and Gay culture was very successful and almost sold out. Due to shortage of funding we are not planning any future co-promotions.

PERFORMING ARTS AND FILM Bridgnorth Arts for All transport scheme BAA had a successful year with an increase in numbers over the previous year and new bookers using the scheme. Users of Innage Lane day centre have continued to use the scheme and a large group of older people from Much Wenlock used a mini bus for one show. These are all positive developments, but BAAâ&amp;#x20AC;&amp;#x2122;s future is uncertain as funding bids were unsuccessful and we now waiting decisions from Bridgnorth and South Shropshire who want to create a joint scheme which we will have to tender for.

MARKETING Website The DASh website transferred to a new host in November 2006, below is a report on visits to the site. During this time Omar Ghafoor, who is on a work placement for one day a week, has been updating the website and newsletter with guidance from the General Manager. General Summary of DASh website visits From Wednesday November 8 2006 to Tuesday June 26 2007 Successful requests: 77,322 Average successful requests per day: 336 Successful requests for pages: 27,391 Average successful requests for pages per day: 119 Failed requests: 18,850 Redirected requests: 2 Data transferred: 2.80 gigabytes Average data transferred per day: 12.46 megabytes In 2007 there will be two new additions to the website, an artistsâ&amp;#x20AC;&amp;#x2122; database and an artistsâ&amp;#x20AC;&amp;#x2122; forum.

STRATEGIC INITIATIVES Fusion Plus and Management Board Fusion Plus DASh has continued to be an active partner in Fusion Plus, which brings Disability Arts and Sports together. Fusion Plus has funding from Birmingham City Council to create a residency between a Disabled Artist and a Disabled Athlete, which has started and will finish by July 07. Management Board The new Directors were voted on to the board at the Annual General Meeting on 29th September 2006, they were; Jean Green, Ann Bennett and Maralyn Hepworth. In early 2007 we placed an advert in the Guardian newspaper this year to attract new Board members. This was very successful and after holding an open day for new Board members we now have three new Trustees/ Directors. Mary Hayter, Stephen Gibson and Yvette Priestley, who will be standing for election at the Annual General Meeting 29th June 2007.

Meet with Director of Pedal, a recreational group for Learning Disabled Adults

We hosted a six day placement for a Disabled man through ENABLE. He was interested to try working in an office environment. The placement allowed him to try a broad range of work.

Equal Ability were carrying out a National survey of user led organisations and we were selected to participate and be paid £750.

The annual report for DASH Disability Arts in Shropshire from the 2006/2007 period.