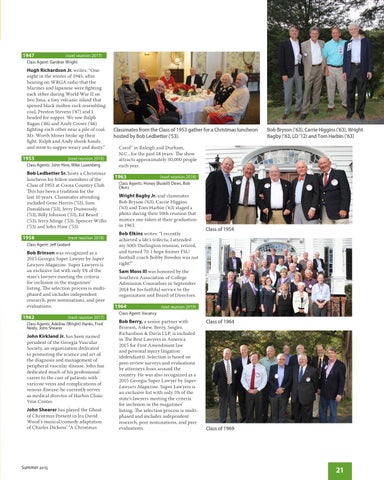 Hugh Richardson Jr. writes: “One night in the winter of 1945, after hearing on WRGA radio that the Marines and Japanese were fighting each other during World War II on Iwo Jima, a tiny volcanic island that spewed black molten rock resembling coal, Preston Stevens (’47) and I headed for supper. We saw Ralph Ragan (’46) and Andy Crowe (’46) fighting each other near a pile of coal. Mr. Worth Moser broke up their fight. Ralph and Andy shook hands and went to supper weary and dusty.” 1953

Bob Brinson was recognized as a 2015 Georgia Super Lawyer by Super Lawyers Magazine. Super Lawyers is an exclusive list with only 5% of the state’s lawyers meeting the criteria for inclusion in the magazines’ listing. The selection process is multiphased and includes independent research, peer nominations, and peer evaluations. 1962

John Kirkland Jr. has been named president of the Georgia Vascular Society, an organization dedicated to promoting the science and art of the diagnosis and management of peripheral vascular disease. John has dedicated much of his professional career to the care of patients with varicose veins and complications of venous disease; he currently serves as medical director of Harbin Clinic Vein Center. John Shearer has played the Ghost of Christmas Present in Ira David Wood’s musical/comedy adaptation of Charles Dickens’ “A Christmas

Classmates from the Class of 1953 gather for a Christmas luncheon hosted by Bob Ledbetter (’53).

Wright Bagby Jr. a nd classmates Bob Bryson (’63), Carrie Higgins (’63) and Tom Harbin (’63) staged a photo during their 50th reunion that mimics one taken at their graduation in 1963. Bob Elkins writes: “I recently achieved a life’s trifecta; I attended my 50th Darlington reunion, retired, and turned 70. I hope former FSU football coach Bobby Bowden was not right!”

Sam Moss III was honored by the Southern Association of College Admission Counselors in September 2014 for his faithful service to the organization and Board of Directors. 1964

Bob Berry, a senior partner with Brinson, Askew, Berry, Seigler, Richardson &amp; Davis LLP, is included in The Best Lawyers in America 2015 for First Amendment law and personal injury litigation (defendants). Selection is based on peer-review surveys and evaluations by attorneys from around the country. He was also recognized as a 2015 Georgia Super Lawyer by Super Lawyers Magazine. Super Lawyers is an exclusive list with only 5% of the state’s lawyers meeting the criteria for inclusion in the magazines’ listing. The selection process is multiphased and includes independent research, peer nominations, and peer evaluations. 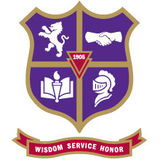