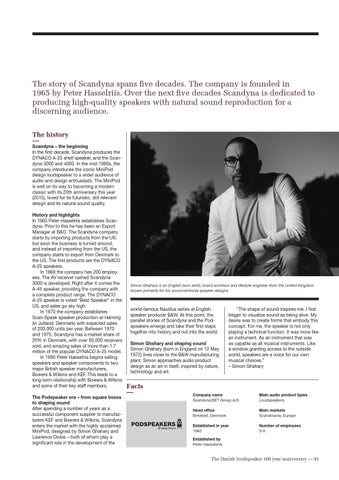 The story of Scandyna spans five decades. The company is founded in 1965 by Peter Hasselriis. Over the next five decades Scandyna is dedicated to producing high-quality speakers with natural sound reproduction for a discerning audience. The history —

Scandyna – the beginning In the first decade, Scandyna produces the DYNACO A-25 shelf speaker, and the Scandyna 3000 and 4000. In the mid-1990s, the company introduces the iconic MiniPod design loudspeaker to a wider audience of audio and design enthusiasts. The MiniPod is well on its way to becoming a modern classic with its 20th anniversary this year (2015), loved for its futuristic, still relevant design and its natural sound quality. History and highlights In 1965 Peter Hasselriis establishes Scandyna. Prior to this he has been an Export Manager at B&O. The Scandyna company starts by importing products from the US, but soon the business is turned around, and instead of importing from the US, the company starts to export from Denmark to the US. The first products are the DYNACO A-25 speakers. In 1969 the company has 200 employees. The AV receiver named Scandyna 3000 is developed. Right after it comes the A-45 speaker, providing the company with a complete product range. The DYNACO A-25 speaker is voted “Best Speaker” in the US, and sales go sky high. In 1970 the company establishes Scan-Speak speaker production at Hørning (in Jutland, Denmark) with expected sales of 200,000 units per year. Between 1970 and 1975, Scandyna has a market share of 20% in Denmark, with over 50,000 receivers sold, and amazing sales of more than 1.7 million of the popular DYNACO A-25 model. In 1990 Peter Hasselriis begins selling speakers and speaker components to two major British speaker manufacturers, Bowers & Wilkins and KEF. This leads to a long-term relationship with Bowers & Wilkins and some of their key staff members. The Podspeaker era – from square boxes to shaping sound After spending a number of years as a successful component supplier to manufacturers KEF and Bowers & Wilkins, Scandyna enters the market with the highly acclaimed MiniPod, designed by Simon Ghahary and Lawrence Dickie – both of whom play a significant role in the development of the

Simon Ghahary is an English born artist, brand architect and lifestyle engineer from the United Kingdom known primarily for his unconventional speaker designs.

world-famous Nautilus series at English speaker producer B&W. At this point, the parallel stories of Scandyna and the Podspeakers emerge and take their first steps together into history and out into the world. Simon Ghahary and shaping sound Simon Ghahary (born in England on 12 May 1972) lives close to the B&W manufacturing plant. Simon approaches audio product design as an art in itself, inspired by nature, technology and art.

“The shape of sound inspires me. I first began to visualize sound as being alive. My desire was to create forms that embody this concept. For me, the speaker is not only playing a technical function. It was more like an instrument. As an instrument that was as capable as all musical instruments. Like a window granting access to the outside world, speakers are a voice for our own musical choices.” – Simon Ghahary