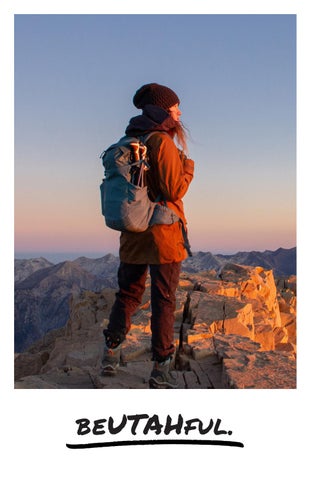 Hi there, come on in. Stay a little while...

AN INTRODUCTION TO MY LIFE AND WHO I AM.

PARDON MY FRENCH, BUT I’M NO NERD.

I grew up on the west coast in northern california in a liberal family with a conservative lifestyle in the heart of silicon valley. Pardon my french, but I’m no nerd. So I left the tech bubble and went east to boston for five years to explore the idea of college and careers involving things that I found personally relevant and interesting. I found myself enrolled in a graphic design program and part of a division one track and field team — an odd mix for sure. No one was more confused than myself because how the heck do arts and athletics make sense? The answer is they don’t. Or at least, they didn’t until I moved to utah. After college I found myself trying to appease the artistic and active sides of myself by freelancing in the city and spending the rest of my time finding rides up to the mountains on the weekends. I’d like to say I did something dramatic and quit my job on an impulse. but I was already doing a lot of remote work and had been planning a big trip since college. So I packed my computer, passport, and my most reliable hiking boots into a backpack with a one way ticket to Europe to spend the next four months trying to gain some perspective on what

I wanted from life. A bit of a daunting task, but somewhere along the way I started to find the clarity I was looking for. I met a lot of amazing people who were stoked to be living life and doing things they were passionate about. So I asked myself, â&amp;#x20AC;&amp;#x153;after this trip, what do you want to do? What would make you happy?â&amp;#x20AC;? Unsurprisingly, there were several things I wanted. I wanted to move back west where the sun shines more than it doesnâ&amp;#x20AC;&amp;#x2122;t and live in a place where the outdoors is in my backyard. I wanted to ski, hike, and camp more. I wanted to find a design job working for a company I care about and appreciates the lifestyle I strive for and believes that arts and athletics does make sense together. I wanted to push myself creatively and physically.

I’ve always liked the idea of moving somewhere new and after some not super in depth research I decided to send it out to Utah. I figured I’d go for a winter to work as a ski instructor and keep freelancing while keeping an eye out for job opportunities and sussing out if this was the place for me. I guess a year and half later I’ve decided that Utah is definitely the place for me. So let me tell you why. Jobs are everywhere and even if they don’t know it, everyone needs a graphic designer. The thing about Utah is that the people here are all about the outdoors. This means more companies are also for the outdoors. Actually getting a job is a little trickier, but in terms of job opportunity - that box gets a check. Now let’s talk about the most overlooked, in your face, underrated appeal of this part of the country. It feels like if you’re not a state by the atlantic or pacific ocean, you’re not a state worth living in. I say this because that’s the vibe I got from living on both coasts (but let’s be real, everyone there has a huge ego about where they’re from). So what does Utah have that makes it so great? Glad you asked. I will explain with a series of photos from my epic adventures and short captions to prove my point. Antelope Island, UT November 2019

FROM THE SALTY LAKE TO THE MOUNTAINS. SHRED BY DAY AND HIT THE TOWN AT NIGHT. THERE’S NOT MUCH YOU CAN’T DO OUT HERE.

GREATEST SNOW ON EARTH. FOR SEVERAL REASONS, AND NOT JUST BECAUSE OUR LICENSE PLATES SAY SO.

10 THINGS YOU DIDN’T KNOW ABOUT UTAH SNOW. As explained by skiutah.com/explore/snow

#2 ONE FOOT EVERY FIVE DAYS

Utah’s Cottonwood Canyons are one of the snowiest places in the world, with Alta averaging 551 inches of snow annually.

From December through March, more than a foot of snow falls every five days.

#3 SNOW DENSITY IS 8.5 PERCENT This creates the perfect “body” to float your skis through powder.

#5 EIGHT DRIVING MILES The difference between 40 feet of snow per year in the Cottonwood Canyons and 5 feet per year in Salt Lake City. Enjoy deep powder by day and city living by night.

#6 JANUARY 13TH According to historical data, this is the golden winter day. In other words, this day has the highest likelihood of receiving snowfall over any other winter day.

#8 LAKE EFFECT The Great Salt Lake does not freeze, so lake effect is a possibility all ski season long. Resorts within proximity to the lake enjoy lake-effect periods which produce about five percent of the average precipitation from September to May.

Over the course of an extended weekend vacation, it’s very likely you’ll see both new snow and bluebird skies. Do the math, you’ll find nearly 300 days of sunshine a year and a foot of snow every five days (see No. 2).

At 8,750 feet in Utah, 99 percent of the precipitation during the ski season falls in the form of snow.

DID I MENTION THE SOFT, FRESH, BUTTERY POWDER? OR AS THE KIDS I TEACH IN SKI SCHOOL LIKE TO CALL IT - FRESHIE POW POW.

Here’s a spread dedicated to the good stuff, because there really is nothing like it. Regardless of riding on one plank versus two, it’s a surfy, playful kind of fun. It’s also the best time to eat it if you’re going to full send it off a homemade kicker in the woods.

beUTAHful. FROM THE SALT FLATS TO THE SAND DUNES AND THE VALLEYS TO THE CANYONS... THE ONLY THING WE DONâ&amp;#x20AC;&amp;#x2122;T HAVE IS AN OCEAN.

This is scooter. He’s a good boy. On a side note, it is always worth waking up for a sunrise. Even when it’s cloudy, you get amazing, soft lighting. Antelope Island, UT November 2019

There’s a lot more to scenic utah outside of the classic “must see” places to visit. I moved to park city for it’s legendary winter, but once the snow melted I discovered how lush the high desert can be. In an urban city setting, you’d have to go to the gym or run around people and cars on a crowded sidewalk to get your daily steps in. Here, your backyard is your gym.

For those who feel a little more ambitious, camp out at emerald lake and summit timpanogos â&amp;#x20AC;&amp;#x201D; the second tallest peak in utah at 11,753 feet of elevation. If you time your visit right before the snow starts to fall, youâ&amp;#x20AC;&amp;#x2122;ll have the entire mountain to yourself to enjoy a stunning moonset and epic sunrise.

Looking for something scenic but low key? Check out the jordanelle reservoir. You can drive right to the water and bbq, paddle board, or go for a hike around the perimeter. Keep an eye out for wild cacti, easy to find by their bright red and pink flowers.

And if thatâ&amp;#x20AC;&amp;#x2122;s still not good enough for you, the other great thing about being based out of utah is that everything else is super accessible. For a change of pace, take a road trip out to wyoming, california, oregon, colorado, or arizona. Enjoy swimming in the pacific ocean, climbing up the grand tetons, squeezing through narrow slot canyons and more.

THANKS FOR VISITING, COME AGAIN SOON! OR, YOU KNOW, JUST MOVE HERE.

COLOPHON Designer: cat yu Fonts: permanent marker, acumin pro This zine is comprised of a series of scenic photos and blurbs about why you should move to utah. Have I convinced you yet?

a little zine about my time in utah and why I love it so much.