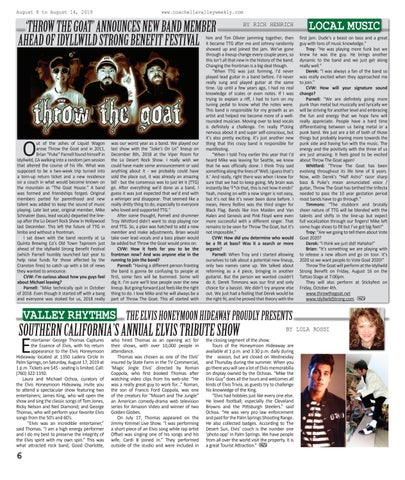 ut of the ashes of Liquid Wagon arose Throw the Goat and in 2011, Brian “Puke” Parnell found himself in Idyllwild, CA walking into a random jam session that altered the course of his life. What was supposed to be a two-week trip turned into a torn-up return ticket and a new residence on a couch in what would become known on the mountain as “The Goat House.” A band was formed and friendships forged. Original members parted for parenthood and new talent was added to keep the sound of music playing. Late last year, original member, Mike Schnalzer (bass, lead vocals) departed the lineup after the Lo Desert Rock Show in Hollywood last December. This left the future of TTG in limbo and without a frontman. I sat down with the band recently at La Quinta Brewing Co’s Old Town Taproom just ahead of the Idyllwild Strong Benefit Festival (which Parnell humbly launched last year to help raise funds for those affected by the Cranston fires) to catch up with a bit of news they wanted to announce. CVW: I’m curious about how you guys feel about Michael leaving? Parnell: “Mike technically quit in October of 2018. Even though it started off with a bang and everyone was stoked for us, 2018 really

was our worst year as a band. We played our last show with the “Joke’s On Us” lineup on December 8th, 2018 at the Viper Room for the Lo Desert Rock Show. I really wish we could have made some announcement or said anything about it - we probably could have sold the place out, it was already an amazing bill - but the consensus was to just let it (TTG) go. After everything we’d done as a band, I guess it was just expected that we’d end with a whimper and disappear. That seemed like a really shitty thing to do, especially to everyone who loved and supported TTG.” After some thought, Parnell and drummer Troy Whitford didn’t want to stop playing nor end TTG. So, a plan was hatched to add a new member and make adjustments. Brian would take over lead vocals and a bass player would be added but Throw the Goat would press on. CVW: How it feels for you to be the frontman now? And was anyone else in the running to join the band? Parnell: “Having a different person fronting the band is gonna be confusing to people at first, some fans will be bummed. Some will dig it. I’m sure we’ll lose people over the new lineup. But going forward just feels like the right thing to do. I love Mike and he will always be a part of Throw The Goat. This all started with

him and Tim Olivier jamming together, then it became TTG after me and Johnny randomly showed up and joined the jam. We’ve gone through a lineup change every couple years, so this isn’t all that new in the history of the band. Changing the frontman is a big deal though. “When TTG was just forming, I’d never played lead guitar in a band before. I’d never really sung and played guitar at the same time. Up until a few years ago, I had no real knowledge of scales or even notes. If I was trying to explain a riff, I had to turn on my tuning pedal to know what the notes were. This band is responsible for my growth as an artist and helped me become more of a wellrounded musician. Moving over to lead vocals is definitely a challenge. I’m really f*cking nervous about it and super self-conscious, but it’s also pretty exciting. It’s just another new thing that this crazy band is responsible for manifesting. “When I told Troy earlier this year that I’d heard Mike was leaving for Seattle, we knew that he was officially done. I think Troy said something along the lines of ‘Well, I guess that’s it.’ And really, right there was when I knew for sure that we had to keep going. My brain was instantly like ‘F*ck that, this is not how it ends!’ Yeah, moving on with a new singer is not easy, but it’s not like it’s never been done before. I mean, Henry Rollins was the third singer for Black Flag. Bands like Iron Maiden and Van Halen and Genesis and Pink Floyd were even more successful with a different singer. That remains to be seen for Throw The Goat, but it’s not impossible.” CVW: How did you determine who would be a fit at bass? Was it a search or more organic? Parnell: When Troy and I started allowing ourselves to talk about a potential new lineup, only two names came up. We talked about reforming as a 4 piece, bringing in another guitarist. But the person we wanted couldn’t do it. Derek Timmons was our first and only choice for a bassist. We didn’t try anyone else out. We just had a feeling that Derek would be the right fit, and he proved that theory with the

ntertainer George Thomas Captures the Essence of Elvis, with his return appearance to the Elvis Honeymoon Hideaway located at 1350 Ladera Circle in Palm Springs, on Saturday, August 17, 2019 at 1 p.m. Tickets are $45 - seating is limited. Call: (760) 322-1192. Laura and Michael Ochoa, curators of the Elvis Honeymoon Hideaway, invite you to attend a spectacular show featuring two entertainers; James King, who will open the show and sing the classic songs of Tom Jones, Ricky Nelson and Neil Diamond; and George Thomas, who will perform your favorite Elvis songs from the 50’s and 60’s. “Elvis was an incredible entertainer,” said Thomas. “I am a high energy performer and I do my best to preserve the integrity of the Elvis spirit with my own spin.” This was what attracted rock band, Good Charlotte,

who hired Thomas as an opening act for their shows, with over 10,000 people in attendance. Thomas was chosen as one of the Elvis’ insured by State Farm in the TV Commercial, ‘Magic Jingle Elvis’ directed by Roman Coppola, who first booked Thomas after watching video clips from his web-site. “He was a really great guy to work for...” Roman, the son of Francis Ford Coppola, was one of the creators for “Mozart and The Jungle” an American comedy-drama web television series for Amazon Video and winner of two Golden Globes. On July 17, Thomas appeared on the Jimmy Kimmel Live Show. “I was performing a short piece of an Elvis song while rap artist Offset was singing one of his songs and his wife, Cardi B joined in.” They performed outside of the studio and were included in

first jam. Dude’s a beast on bass and a great guy with tons of music knowledge.” Troy: “He was playing more funk but we knew he was the guy. He brings another dynamic to the band and we just get along really well.” Derek: “I was always a fan of the band so was really excited when they approached me to join.” CVW: How will your signature sound change? Parnell: “We are definitely going more punk than metal but musically and lyrically we will be striving for another level and embracing the fun and energy that we hope fans will really appreciate. People have a hard time differentiating between us being metal or a punk band. We just are a bit of both of those things but probably leaning more towards the punk side and having fun with the music. The energy and the positivity with the three of us are just amazing. It feels good to be excited about Throw The Goat again! Whitford: “Throw The Goat has been evolving throughout its life time of 8 years. Now, with Derek’s “Half Astro” razor sharp bass &amp; Puke’s mean annunciated voice / guitar, Throw The Goat has birthed the trifecta needed to pass the 10 year gestation period most bands have to go through.” Timmons: “The stubborn and brutally sheer nature of TTG will be blended with the talents and shifts in the line-up but expect full vocalization through our fingers! Mike left some huge shoes to fill but I’ve got big feet!” Troy: “Are we going to tell them about Vote Goat 2020? Derek: “I think we just did! Hahaha!” Brian: “It’s something we are playing with to release a new album and go on tour. It’s 2020 so we want people to Vote Goat 2020!” Throw The Goat will perform at the Idyllwild Strong Benefit on Friday, August 16 on the Tattoo Stage at 7:00pm. They will also perform at Stickyfest on Friday, October 4th. www.throwthegoat.net www.IdyllwildStrong.com

the closing segment of the show. Tours of the Honeymoon Hideaway are available at 1 p.m. and 3:30 p.m. daily during the season, but are closed on Wednesday and Thursday during the summer. When you go there you will see a lot of Elvis memorabilia on display owned by the Ochoas. “Mike the Elvis Guy” does all the tours and welcomes all kinds of Elvis Trivia, as guests try to challenge his knowledge of the King. “Elvis had hobbies just like every one else. He loved football; especially the Cleveland Browns and the Pittsburgh Steelers.” said Ochoa. “He was very pro law enforcement and paid for the Palm Springs Shooting Range. He also collected badges. According to The Desert Sun, Elvis’ couch is the number one ‘photo opp’ in Palm Springs. We have people from all over the world visit the property. It is a great Tourist Attraction.”