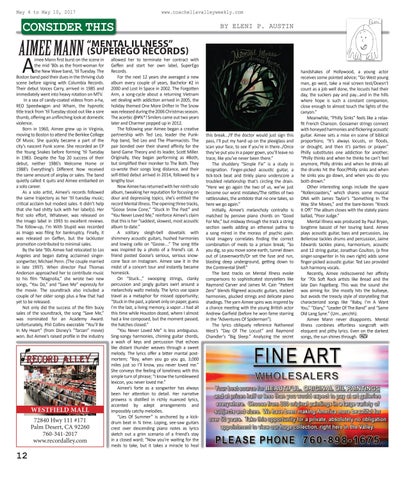 imee Mann first burst on the scene in the mid ‘80s as the front-woman for the New Wave band, ‘til Tuesday. The Boston band paid their dues in the thriving club scene before signing with Columbia Records. Their debut Voices Carry, arrived in 1985 and immediately went into heavy rotation on MTV. In a sea of candy-coated videos from a-ha, REO Speedwagon and Wham, the hypnotic title track from ‘til Tuesday stood out like a sore thumb, offering an unflinching look at domestic violence. Born in 1960, Aimee grew up in Virginia, moving to Boston to attend the Berklee College Of Music. She quickly became a part of the city’s nascent Punk scene. She recorded an EP the Young Snakes before forming ‘til Tuesday in 1983. Despite the Top 20 success of their debut, neither 1986’s Welcome Home or 1988’s Everything’s Different Now received the same amount of airplay or sales. The band quietly called it quits and Aimee embarked on a solo career. As a solo artist, Aimee’s records followed the same trajectory as her ‘til tuesday music; critical acclaim but modest sales. It didn’t help that she had shitty luck with her label(s). Her first solo effort, Whatever, was released on the Imago label in 1993 to excellent reviews. The follow-up, I’m With Stupid was recorded as Imago was filing for bankruptcy. Finally, it was released on Geffen, but the lackluster promotion contributed to minimal sales. By the late ‘90s Aimee had relocated to Los Angeles and began dating acclaimed singersongwriter, Michael Penn. (The couple married in late 1997). When director Paul Thomas Anderson approached her to contribute music to his film “Magnolia,” she wrote two new songs, “You Do,” and “Save Me” expressly for the movie. The soundtrack also included a couple of her older songs plus a few that had yet to be released. Not only did the success of the film buoy sales of the soundtrack, the song “Save Me,” was nominated for an Academy Award. Unfortunately, Phil Collins execrable “You’ll Be In My Heart” (from Disney’s “Tarzan” movie) won. But Aimee’s raised profile in the industry

allowed her to terminate her contract with Geffen and start her own label, SuperEgo Records. For the next 12 years she averaged a new album every couple of years, Bachelor #2 in 2000 and Lost In Space in 2002. The Forgotten Arm, a song-cycle about a returning Vietnam vet dealing with addiction arrived in 2005, the holiday themed One More Drifter In The Snow was released during the 2006 Christmas season. The acerbic @#%*! Smilers came out two years later and Charmer popped up in 2012. The following year Aimee began a creative partnership with Ted Leo, leader the PunkPop band, Ted Leo and The Pharmacists. The pair bonded over their shared affinity for the band Game Theory and its leader, Scott Miller. Originally, they began performing as #Both, but simplified their moniker to The Both. They co-wrote their songs long distance, and their self-titled debut arrived in 2014, followed by a lengthy tour. Now Aimee has returned with her ninth solo album, tweaking her reputation for focusing on dour and depressing topics, she’s entitled the record Mental Illness. The opening three tracks, “Goose Snow Cone,” “Stuck In The Past” and “You Never Loved Me,” reinforce Aimee’s claim that this is her “saddest, slowest, most acoustic album to date.” A solitary sleigh-bell dovetails with shimmery acoustic guitars, hushed harmonies and lowing cello on “Goose….” The song title was inspired by a photo of a friend’s cat. A friend posted Goose’s serious, serious snowcone face on Instagram. Aimee saw it in the midst of a concert tour and instantly became homesick. On “Stuck..,” swooping strings, clanky percussion and jangly guitars swirl around a melancholy waltz melody. The lyrics use space travel as a metaphor for missed opportunity; “Stuck in the past, a planet only on paper, guess I’m the last, a living memory, a vapor…I had all this time while Houston dozed, where I almost had a line composed, but the moment passed, the hatches closed.” “You Never Loved Me” is less ambiguous. Sing-songy harmonies, chiming guitar chords, a wash of keys and percussion that echoes like distant thunder weaves through a sweet melody. The lyrics offer a bitter marital postmortem; “Boy, when you go you go, 3,000 miles just so I’ll know, you never loved me.” She conveys the feeling of loneliness with this simple turn of phrase; “I know the tumbleweed lexicon, you never loved me.” Aimee’s forte as a songwriter has always been her attention to detail. Her narrative prowess is distilled in richly nuanced lyrics, accented by adept arrangements and impossibly catchy melodies. “Lies Of Summer” is anchored by a kickdrum beat in ¾ time. Loping, see-saw guitars crest over descending piano notes as lyrics sketch out a grim scenario of a friend’s stay in a closed ward; “Now you’re waiting for the meds to take, but it takes a miracle to heal

this break.../If the doctor would just sign this pass, I’ll put my hand up on the plexiglass and scan your face, to see if you’re in there../Once they’ve put you in a paper gown, you’ll leave no trace, like you’ve never been there.” The shuddery “Simple Fix” is a study in resignation. Finger-picked acoustic guitar, a tick-tock beat and tinkly piano underscore a troubled relationship that’s circling the drain. “Here we go again the two of us, we’ve just become our worst mistakes/The rattles of two rattlesnakes, the antidote that no one takes, so here we go again.” Initially, Aimee’s melancholy contralto is matched by pensive piano chords on “Good For Me,” but midway through the track a string section swells adding an ethereal patina to a song mired in the morass of psychic pain. Vivid imagery correlates finding the correct combination of meds to a prison break; “So you dig, so you move some earth, tunnel down out of Leavenworth/Or set the fuse and run, blasting deep underground, getting down to the Continental Shelf.” The best tracks on Mental Illness evoke comparisons to sophisticated storytellers like Raymond Carver and James M. Cain “Patient Zero” blends filigreed acoustic guitars, stacked harmonies, plucked strings and delicate piano shadings. The yarn Aimee spins was inspired by a chance meeting with the young British actor Andrew Garfield (before he won fame starring in the “Adventures Of Spiderman”). The lyrics obliquely reference Nathaneal West’s “Day Of The Locust” and Raymond Chandler’s “Big Sleep.” Analyzing the secret

handshakes of Hollywood, a young actor receives some pointed advice; “Go West young man, go west, take a real screen test/Doesn’t count as a job well done, the locusts had their day, the suckers pay and pay…and in the hills where hope is such a constant companion, close enough to almost touch the lights of the canyon.” Meanwhile, “Philly Sinks” feels like a relaxfit French Chanson. Gossamer strings connect with honeyed harmonies and flickering acoustic guitar. Aimee sets a mise en scene of biblical proportions; “It’s always locusts, or floods, or drought, and then it’s parties or prayer.” Philly substitutes one addiction for another; “Philly thinks and when he thinks he can’t feel anymore, Philly drinks and when he drinks all the drunks hit the floor/Philly sinks and when he sinks you go down, and when you do you both drown.” Other interesting songs include the spare “Rollercoasters,” which shares some musical DNA with James Taylor’s “Something In The Way She Moves,” and the bare-bones “Knock It Off.” The album closes with the stately piano ballad, “Poor Judge.” Mental Illness was produced by Paul Bryan, longtime bassist of her touring band. Aimee plays acoustic guitar, bass and percussion, Jay Bellerose tackles drums and percussion, Jaime Edwards tackles piano, harmonium, acoustic and 12 string guitar, Jonathan Coulton, (a fine singer-songwriter in his own right) adds some finger-picked acoustic guitar. Ted Leo provided lush harmony vocals. Recently, Aimee rediscovered her affinity for ‘70s Soft Rock artists like Bread and the late Dan Fogelberg. This was the sound she was aiming for. She mostly hits the bullseye, but avoids the treacly style of storytelling that characterized songs like “Baby, I’m A Want You,” “Diary,” “Leader Of The Band” and “Same Old Lang Syne.” (Um…yecchh). Aimee Mann never disappoints. Mental Illness combines effortless songcraft with eloquent and pithy lyrics. Even on the darkest songs, the sun shines through.