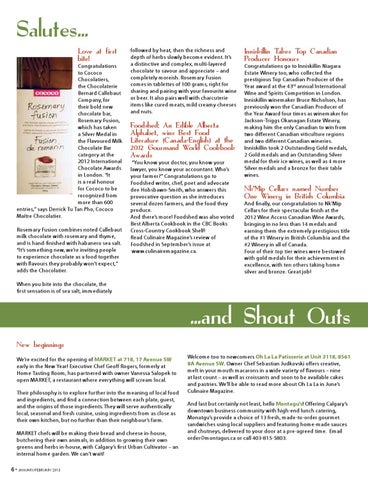 Salutes... Love at first bite! Congratulations to Cococo Chocolatiers, the Chocolaterie Bernard Callebaut Company, for their bold new chocolate bar, Rosemary Fusion, which has taken a Silver Medal in the Flavoured Milk Chocolate Bar category at the 2012 International Chocolate Awards in London. “It is a real honour for Cococo to be recognized from more than 600 entries,” says Derrick Tu Tan Pho, Cococo Maître Chocolatier. Rosemary Fusion combines noted Callebaut milk chocolate with rosemary and thyme, and is hand-finished with habanero sea salt. “It’s something new, we’re inviting people to experience chocolate as a food together with flavours they probably won’t expect,” adds the Chocolatier.

followed by heat, then the richness and depth of herbs slowly become evident. It’s a distinctive and complex, multi-layered chocolate to savour and appreciate – and completely moreish. Rosemary Fusion comes in tablettes of 100 grams, right for sharing and pairing with your favourite wine or beer. It also pairs well with charcuterie items like cured meats, mild creamy cheeses and nuts.

Foodshed: An Edible Alberta Alphabet, wins Best Food Literature (Canada-English) at the 2012 Gourmand World Cookbook Awards “You know your doctor, you know your lawyer, you know your accountant. Who’s your farmer?” Congratulations go to Foodshed writer, chef, poet and advocate dee Hobsbawn-Smith, who answers this provocative question as she introduces several dozen farmers, and the food they produce. And there’s more! Foodshed was also voted Best Alberta Cookbook in the CBC Books Cross-Country Cookbook Shelf! Read Culinaire Magazine’s review of Foodshed in September’s issue at www.culinairemagazine.ca.

Inniskillin Takes Top Canadian Producer Honours Congratulations go to Inniskillin Niagara Estate Winery too, who collected the prestigious Top Canadian Producer of the Year award at the 43rd annual International Wine and Spirits Competition in London. Inniskillin winemaker Bruce Nicholson, has previously won the Canadian Producer of the Year Award four times as winemaker for Jackson-Triggs Okanagan Estate Winery, making him the only Canadian to win from two different Canadian viticulture regions and two different Canadian wineries. Inniskillin took 2 Outstanding Gold medals, 2 Gold medals and an Outstanding Silver medal for their ice wines, as well as 4 more Silver medals and a bronze for their table wines.

Nk’Mip Cellars named Number One Winery in British Columbia And finally, our congratulation to Nk’Mip Cellars for their spectacular finish at the 2012 Wine Access Canadian Wine Awards, bringing in no less than 14 medals and earning them the extremely prestigious title of the #1 Winery in British Columbia and the #2 Winery in all of Canada. Four of their top tier wines were bestowed with gold medals for their achievement in excellence, with ten others taking home silver and bronze. Great job!

When you bite into the chocolate, the first sensation is of sea salt, immediately

...and Shout Outs New beginnings We’re excited for the opening of MARKET at 718, 17 Avenue SW early in the New Year! Executive Chef Geoff Rogers, formerly at Home Tasting Room, has partnered with owner Vanessa Salopek to open MARKET, a restaurant where everything will scream local. Their philosophy is to explore further into the meaning of local food and ingredients, and find a connection between each plate, guest, and the origins of those ingredients. They will serve authentically local, seasonal and fresh cuisine, using ingredients from as close as their own kitchen, but no further than their neighbour’s farm. MARKET chefs will be making their bread and cheese in-house, butchering their own animals, in addition to growing their own greens and herbs in-house, with Calgary’s first Urban Cultivator – an internal home garden. We can’t wait!

Welcome too to newcomers Oh La La Patisserie at Unit 3118, 8561 8A Avenue SW. Owner Chef Sebastian Judkovski offers creative, melt in your mouth macarons in a wide variety of flavours – nine at last count – as well as croissants and soon to be available cakes and pastries. We’ll be able to read more about Oh La La in June’s Culinaire Magazine. And last but certainly not least, hello Montagu’s! Offering Calgary’s downtown business community with high-end lunch catering, Monatgu’s provide a choice of 13 fresh, made-to-order gourmet sandwiches using local suppliers and featuring home-made sauces and chutneys, delivered to your door at a pre-agreed time. Email order@montagus.ca or call 403-815-5803. 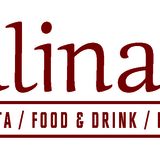