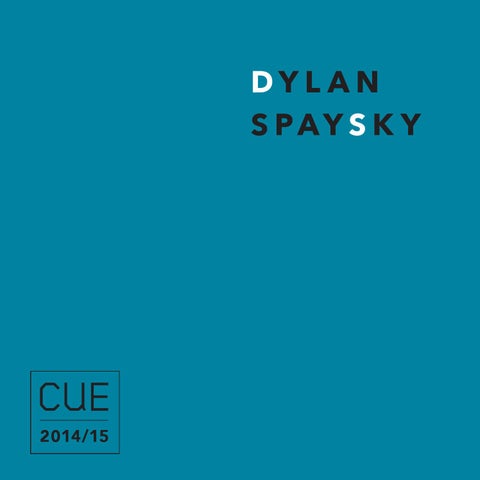 Each year, CUE invites ten individuals from across the country to anonymously nominate up to three artists for the solo exhibition program. Artists are invited to apply, and the final selection is made by an independent jury each fall. Jurors for the 2014-15 season were Magdalena Sawon, owner/director of Postmasters Gallery; Papo Colo, artist and former founder/director of Exit Art; and Gregory Amenoff, artist and former Chair, Visual Arts, Columbia University School of the Arts.

CUE ART FOUNDATION IS A DYNAMIC VISUAL ARTS CENTER DEDICATED TO CREATING ESSENTIAL CAREER AND EDUCATIONAL OPPORTUNITIES FOR EMERGING ARTISTS OF ALL AGES. THROUGH EXHIBITIONS, ARTS EDUCATION, AND PUBLIC PROGRAMS, CUE PROVIDES ARTISTS AND AUDIENCES WITH SUSTAINING AND MEANINGFUL EXPERIENCES AND RESOURCES.

DYLAN SPAYSKY Dylan Spaysky was born in Waterford Michigan, the son of an interior decorator and a juvenile correctional officer. After 9/11 he relocated to Detroit where he studied at a small arts and crafts college. He has exhibited in Detroit, Berlin, New York and Los Angeles and organized exhibitions around the Detroit area in venues such as Cave Detroit, Center Galleries, and the abandoned car wash at Norwalk St. and Buffalo St. in Hamtramck.

STATEMENT The show is called taz. Itâ&amp;#x20AC;&amp;#x2122;s kind of a sculpture show. The work is both useful and decorative... or maybe impractical and trying not to be ugly. Itâ&amp;#x20AC;&amp;#x2122;s about the niches of culture, the mundaneness of practical objects, and the melancholy of a handmade object. Cute, the work is cute. I built it from things I got from the dollar store, or the thrift store, or a garage sale or wherever. I made it at my studio and in my garage and in front of the TV. Mostly I made it in front of the TV. Hope you enjoy it.

Dylan Spaysky makes boy art. That isn’t meant to be pejorative. A jagged tower of plastic cups does its best to stand up straight. A seeping mosaic fountain appears wide-eyed and broken as it huddles at our feet. Spayksy’s small sculptural investigations limp behind Americana’s downbeat, crunching the residue of middle-class security underfoot in the process. Clumsy wrenches, festooned with glitter, yarn, and plastic wrap—often funny, never satirical—suggest a shared adolescent deflation, some smudge adulthood left behind. It takes alchemy to turn kitchen-sponge carvings of robots this tender, and our cringing affection eventually forgives the sloppy, tire-flattened Easter egg wreaths and frayed DIY lampshades. Spaysky’s oeuvre stacks kitsch, popular culture, and personal artifact in totems to abandoned enterprise. Since many of the objects sport figural elements, the viewer is encouraged to grapple with each piece’s personality, insecurities and all. We are coaxed into

navigating tandem embarrassment and enchantment over trash not even indie thrift culture could be bothered to reclaim. The pieces featured in Spaysky’s enigmatically titled show, taz, (a play on words between the devilish Looney Toon and anarcho-immediatist terminology) establish their poetry through imprints of touch; the folds in a child’s stained blanket fanned out as tapestry, for instance, or the clock face affixed to a smashed bag of dollar-store toiletries. Spaysky has exposed his funny little characters aloud for our benefit, of course. We watch a red foam Jesus surrender to stillness on his cross; we consider the gingerly taped gaps in a rain stick fashioned from sliced water bottles and plastic gems. We are surprised we want to do either. For such slap-dash constructions, the pull feels eerily sophisticated, confounding viewer expectation in a subtle burn.

These objects should smell, but they don’t. They should crack, but they haven’t. Instead, they beg for fair witness. That’s where Spaysky’s magic comes to the fore—the artist suffuses his work with a soft, lonely echo of want too often absent from art addressing mass-production. He warps salient themes of home by remixing the discarded to new and striking ends. PRETTY LITTLE OUTLIERS The objects on display vary in our impression. All meld found components with minimal manipulation. Some function as forgotten tourist relics lost in the wake of foreclosure or death. Most are unequivocally pathetic. Others, like a fringed knitted cylinder hanging from the ceiling, evade the funerary in refreshingly nimble sways and clacks. The artist doesn’t shun conversations with grunge or Bad Art or Oldenberg, but he doesn’t court them, either. He avoids a moral claim on thrifted archaeology and lets his creatures

talk, regardless of the weird or worrisome timbres contingent on that trust. The artist toys with the social and economic implications of taste and the decorative impulse, of home-making as privilege, even, without necessarily staking a foothold in a larger political conversation. This cultivated ambivalence allows Spaysky to craft dialogues between transience and permanence that never swell beyond the sphere of their installation. Across media, Spaysky analogizes the human body, or, perhaps more precisely, the body’s human limits. Plastic pearls glint like gallstones beneath cellophane skins. Biomorphic glue accretions clump over supports that may or may not be molding, stains and tears abound, and the fountains come far closer to weeping than spewing. Their posture is phallic, and that specific, thwarted slouch wrestles with the mother tongue of masculinity in ways too slippery for definition. When neon fades, it hurts to name what’s left. A DISCARDING POLITIC So we circle back to boyhood. It’s hard to ignore the sense of arrested development humming through the assortment on display in taz. Spaysky’s motley army might not protest the hegemonic fracture it betrays, but its dynamism relies heavily on nostalgia for a pre-ironic consumer landscape. Are these works just reliquaries for a supplanted value system, then? Spaysky seems more interested in change than failure, so it’s vital to frame the artist’s vision of pop inculcation as identity rupture. A mass-produced existence, especially one born pre-digitally, projects 30

durational and episodic signatures simultaneously upon singular hosts. While a cultural symbol’s personal relevance is designed to wilt in the name of progress, its filtrate, be it polystyrene or steel, won’t and can’t degrade on cue. Trash physicalizes memory, and that peculiar breed of landfill animism comprises the vertebrae merging our individual and cultural narratives. Slowness and speed cohabit Spaysky’s structures in alternating waves, collapsing mortality and athanasia into a canopic jar for childhood. This dual consciousness silhouettes the puerile in a sadder, stranger gravitas than the viewer could hope to anticipate. We are encouraged to reconcile the debris that bobs in the wake of collective mythology, and, in doing so, reflect on what’s rejected in the act of salvage. THE ACHE REMAINING The specter of a phoenix-like Detroit casts shadows over any up-and-coming Michigan artist’s trajectory. Contemporary media acolytes are obsessed by the semantics of its healing—can art save a dying city? Regeneration and destruction stand in popular dichotomy, but rarely on any sort of continuum, especially as that prurient impulse applies to print and TV. And why should they? The triumph of enterprise and the pornography of ruin can’t overlap if good still obliterates evil in the end, and evil, (poverty, mourning, softness, death) shouldn’t win. That’s not how America works. Good should prevail alone, spotlighted, accompanied by a yawning orchestra pit. Never mind oppositional definition or lived experience; capitalism paints our reality in spatial swathes—Detroit is either dead or alive, it’s not rising.

It mustn’t try. This might help to explain why Spaysky identifies first and foremost as a Waterford artist. He works in a formerly abandoned warehouse near Detroit’s center. He’s a graduate of the College for Creative Studies. But he doesn’t claim ownership of the impenetrable dilapidation narrative the past five years of journalistic coverage has rotated into kill-shot focus. While it bears mention that the pragmatics of his practice do exploit their geographical milieu, the temptation to equate visual art about trash with a modern-day Rome still seems too simple a solution. Spaysky’s repurposed garbage piles aren’t memento mori, however, and their smiles seem a little strained for theory. So, are they “Detroit art” then? Viewers

might recognize the finality of abandonment, but subjective exploration, and certainly the intervention of a native hand, proves more difficult ground. Spaysky straddles environmental conditioning and intellectual rigor seamlessly, and it is the root of that being, the fibrous grips in that deconstruction, that renders his work vital. Since he uses “found” materials, he willfully participates in whatever deposits “Dead Detroit” stories provide, but by personalizing, transforming, and trivializing his sources, he shifts the tone toward a paralleled elevation and disengagement. It’s just a plastic bag, after all, and that’s what makes taz national, noble, and, most importantly, none of those at all.

This essay was written as part of the Young Art Critics Mentoring Program, a partnership between AICA-USA (US section of International Association of Art Critics) and CUE, which pairs emerging writers with AICA mentors to produce original essays on a specific exhibiting artist. Please visit aicausa.org for more information on AICA USA, or cueartfoundation.org to learn how to participate in this program. Any quotes are from interviews with the author unless otherwise specified. No part of this essay may be reproduced without prior consent from the author. Lilly Wei is AICA’s Coordinator for the program this season. For additional arts-related writing, please visit on-verge.org Torey Akers is a Detroit-area transplant from Boston currently working towards her MFA at Cranbrook Academy of Art. Her painting practice focuses on the gendered implications and line, color, and texture. She has had previous writing published in ArtsEditor and the Boston Examiner. Mentor Barbara A. MacAdam is co-executive editor of ARTnews. She has also worked as an editor for Art + Auction, Review: Latin American Literature and Arts, and New York magazine, among other publications. She has reviewed books on art and literature for the LA Times Book Review, Newsday, and the New York Times Book Review, among others, and contributed articles on art, design, and literature to various books and publications. She has curated shows for various nonprofit organizations and is co-president of the International Art Critics Association and is on the advisory committee of the Paris-based Arts Arena. 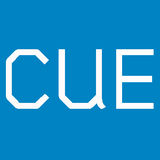