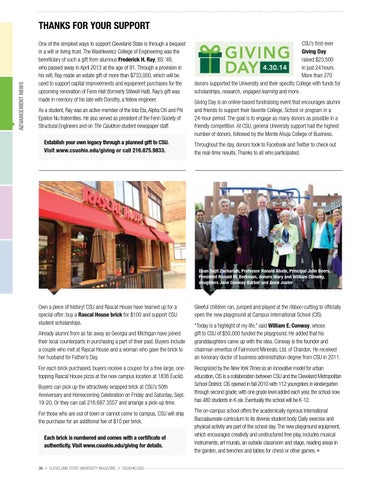 THANKS FOR YOUR SUPPORT One of the simplest ways to support Cleveland State is through a bequest in a will or living trust. The Washkewicz College of Engineering was the beneficiary of such a gift from alumnus Frederick H. Ray, BS ’49, who passed away in April 2013 at the age of 91. Through a provision in his will, Ray made an estate gift of more than $733,000, which will be used to support capital improvements and equipment purchases for the upcoming renovation of Fenn Hall (formerly Stilwell Hall). Ray’s gift was made in memory of his late wife Dorothy, a fellow engineer. As a student, Ray was an active member of the Iota Eta, Alpha Chi and Phi Epsilon Nu fraternities. He also served as president of the Fenn Society of Structural Engineers and on The Cauldron student newspaper staff. Establish your own legacy through a planned gift to CSU. Visit www.csuohio.edu/giving or call 216.875.9833.

CSU’s first-ever Giving Day raised $23,500 in just 24 hours. More than 270 donors supported the University and their specific College with funds for scholarships, research, engaged learning and more. Giving Day is an online-based fundraising event that encourages alumni and friends to support their favorite College, School or program in a 24-hour period. The goal is to engage as many donors as possible in a friendly competition. At CSU, general University support had the highest number of donors, followed by the Monte Ahuja College of Business. Throughout the day, donors took to Facebook and Twitter to check out the real-time results. Thanks to all who participated.

Own a piece of history! CSU and Rascal House have teamed up for a special offer: buy a Rascal House brick for $100 and support CSU student scholarships. Already alumni from as far away as Georgia and Michigan have joined their local counterparts in purchasing a part of their past. Buyers include a couple who met at Rascal House and a woman who gave the brick to her husband for Father’s Day. For each brick purchased, buyers receive a coupon for a free large, onetopping Rascal House pizza at the new campus location at 1836 Euclid. Buyers can pick up the attractively wrapped brick at CSU’s 50th Anniversary and Homecoming Celebration on Friday and Saturday, Sept. 19-20. Or they can call 216.687.3557 and arrange a pick-up time. For those who are out of town or cannot come to campus, CSU will ship the purchase for an additional fee of $10 per brick. Each brick is numbered and comes with a certificate of authenticity. Visit www.csuohio.edu/giving for details.

Gleeful children ran, jumped and played at the ribbon-cutting to officially open the new playground at Campus International School (CIS). “Today is a highlight of my life,” said William E. Conway, whose gift to CSU of $50,000 funded the playground. He added that his granddaughters came up with the idea. Conway is the founder and chairman emeritus of Fairmount Minerals, Ltd. of Chardon. He received an honorary doctor of business administration degree from CSU in 2011. Recognized by the New York Times as an innovative model for urban education, CIS is a collaboration between CSU and the Cleveland Metropolitan School District. CIS opened in fall 2010 with 112 youngsters in kindergarten through second grade; with one grade level added each year, the school now has 480 students in K-six. Eventually the school will be K-12. The on-campus school offers the academically rigorous International Baccalaureate curriculum to its diverse student body. Daily exercise and physical activity are part of the school day. The new playground equipment, which encourages creativity and unstructured free play, includes musical instruments, art murals, an outside classroom and stage, reading areas in the garden, and benches and tables for chess or other games. 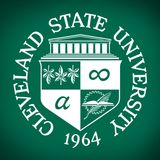