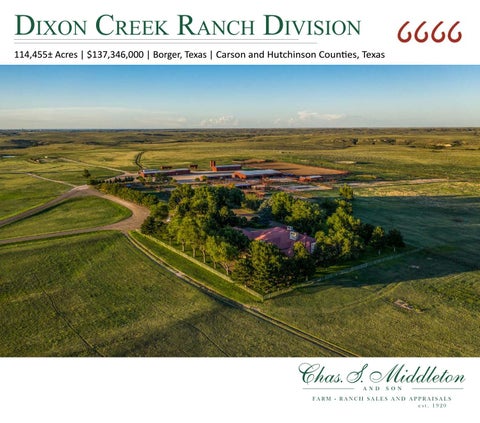 Burk Burnett passed away in 1922. In October, 1923 the first rotary drilling rig ever used in the Texas Panhandle drilled an oil well on the property. In 1980, Burk Burnett’s Granddaughter, Anne Burnett Marion assumed management of all of the 6666’s Ranches, which included the Dixon Creek Ranch. Mrs. Marion was very active in the ranching industry and took a very handson interest in all of the 6666’s holdings. Sadly, Anne Burnett Marion passed away on February 11, 2020, and now for the first time ever, the famed Dixon Creek Ranch Division of the 6666’s Ranches is offered for sale.

The Dixon Creek Ranch is located in the heart of the Texas Panhandle, being approximately 50 miles northeast of Amarillo, Texas. The north end of the ranch is basically adjacent to the oil rich town of Borger, with a population of approximately 15,000. Access to the ranch is provided by substantial paved highway frontage and county roads. Other than the paved highways and railroad easement, all other roads through the ranch are serviced by locked gates, allowing no public access. There is a substantial amount of oil and gas production over major portions of the ranch, but again, access to this production is through locked gates. Elevations on the Dixon Creek Ranch range from just under 3,000 feet to approximately 3,500 feet above sea level. Annual precipitation is in the range of 22 inches, which includes the likelihood of snow in the winter. Much of the Dixon Creek Ranch is described as an open grass prairie land, generally draining to the north. The predominant drainage through the property is Dixon Creek

and its tributaries. Dixon Creek and its side drainages become more predominant, more broken and deeper towards the north end of the ranch. Hackberry Trees, Cottonwoods and Willows become common in the creek bottom areas, with Cedar scattered along the ridgelines and side slopes between the creek bottoms and upland prairies. Live water is found throughout many areas of Dixon Creek. The creek areas are scenic, productive, and offer good wildlife habitat. Many areas in the creek bottoms also have scattered Plum Thickets, Soap Berry Trees and Sumac. The open prairie land portion of the ranch, which is the majority of the property, has very little brush cover, with only scattered Beargrass and an occasional Mesquite. Portions of the ranch have sandier soils, and Sand Sage and Shin Oak are common in the sandier hummocky areas. Soils throughout the ranch range from deep hardlands, loam and clay loam to sandy loam and sandhills. The ranch has a desirable mix of palatable native grasses and the property has been well managed over the years.

Near the southwest corner of the property 6 pivot sprinkler systems have been developed, irrigating approximately 2,900 acres. The Dixon Creek Ranch is located above a strong volume, good quality groundwater formation, known as the Ogallala Formation. The 6 pivot sprinklers are all basically one-half mile in length and 5 of these pivots cover approximately 500 wet acres and 1 pivot covers approximately 400 wet acres. Nine irrigation wells, all powered by electric turbine motors are used to irrigate these 6 pivots. Under current management, 4 of the pivot circles are typically planted in wheat and 2 of the circles are generally farmed one-half in wheat and one-half in hay grazer. Three of the pivots are nozzled at 1,000 gallons per minute each, and 1

As previously stated, Samuel Burk Burnett passed away in 1922, just as the oil production was beginning to be developed on the property. In 1926, his estate entered into a water lease agreement with Phillips Petroleum Company covering 3,200 acres of the ranch. The original 1926 Water Lease called for Phillips Petroleum to pay the ranch $5,000 per year for the right to extract ground water from these five sections and pipe this water to the Phillips Refinery near Borger. In 1981 the Lease was re-negotiated to a price of $84,000 per year. Each year the Lease payment increases and in 2020 the annual lease payment was $164,000. This Lease continues to increase in the upcoming years and in 2030 the payment will be $191,000. The ranch has the right to tie into these waterlines and use this

water for livestock purposes. The ranch has private waterlines tied to the oil company waterlines. These waterlines service livestock drinking troughs as a major water source throughout the southwestern portion of the ranch. A copy of this Water Lease is available upon request. In addition to the above described water source, the remainder of the ranch is watered by windmills, electric submersible water wells and solar wells. Additionally, as previously mentioned, live water is found in Dixon Creek. Overall, the ranch is considered to be very well watered and the water is of good quality. CONTINUED ON PG 12

In the past 15 years, several major grass fires have occurred in the area and on portions of the Dixon Creek Ranch. A considerable amount of new fencing has been installed due to these fires. There are 6 pivot sprinklers systems located in the southwest corner of the ranch and each of the pivots are fenced separately. Because grazing pressure from livestock creates significant numbers of cattle on these irrigated pivots, all of these fences are of 6 wire construction with steel T posts and cedar staves. Overall, the fences on the Dixon Creek Ranch are considered to be in good to excellent condition. CONTINUED ON PG 15

The Dixon Creek Ranch is principally operated as a cow/calf ranching unit. The current stocking rate is approximately 2,650 mother cows, 58 ranch horses and 184 bulls. Because of the 100year drought in 2011 through 2013, the stocking rate was lowered substantially and the cattle numbers are now being increased to normal stocking rates. During this process, the ranch is pasturing yearling cattle in addition to the cow/ calf operation. CONTINUED ON PG 24

There is very little Mesquite and/or Cedar infestations on the Dixon Creek Ranch. The two principal invaders are Beargrass and Prairie Dogs. The ranch spends $50,000 $60,000 per year to control/eradicate Beargrass and Prairie Dogs. The Dixon Creek Ranch is recognized as one of the most productive and efficient grass ranches in the Texas Panhandle. Because brush eradication is not a problem, the economics of cattle ranching on the Dixon Creek Ranch add to the overall reputation of the property. Even though the majority of the ranch has a very open appearance, good wildlife habitat is found throughout the Dixon Creek drainages. Deer and Turkey are common in these more protected areas of the ranch. No commercial hunting has ever been allowed on the property. Production of oil and gas is found over most portions of the property. As previously mentioned, this production was originally found in the 1920’s, approximately 100 years ago, and is still very prolific. Many years ago, the Burnett Family gifted one-half of the minerals to Texas Christian University. The ranch still owns a full one-half of the mineral interest, and annual royalty for the one-half mineral interest has averaged slightly over $2,000,000 per year for the past three years. The seller will convey one-half of their current mineral ownership, which is a full one-quarter mineral interest. Property taxes are approximately $120,000 per year, or just over $1.00 per acre. The Dixon Creek Ranch is now offered for sale for the first time ever. This is an historic reputation ranch any cattleman would be proud to own. All fences, structural improvements and water facilities are immaculate. No expenditure for repairs and maintenance is needed to take over the operation of this ranch. The Dixon Creek Ranch is offered for sale at $1,200 per acre, including one-quarter of the minerals along with all solar and wind generation rights. Mrs. Marion was never interested in developing the wind generation rights on this ranch. Without question, the ranch is located in the “sweet spot” for wind farm development. Wind generation towers adjoin the ranch for miles and miles.

It is an honor to represent the 6666’s Ranches in the sale of their prized Dixon Creek Ranch. We have a complete inventory of cattle, horses, rolling stock, equipment and other personal items, all of which are available to be purchased separately. This significant offering deserves your immediate attention if you are in the market for arguably the best improved quality cattle ranch in the Texas Panhandle.

It is an honor to represent the 6666’s Ranches in the sale of their prized Dixon Creek Ranch. We have a complete inventory of cattle, horses, rolling stock, equipment and other personal items, all of which are available to be purchased separately. This significant offering deserves your immediate attention if you are in the market for arguably the best improved quality cattle ranch in the Texas Panhandle. 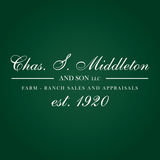