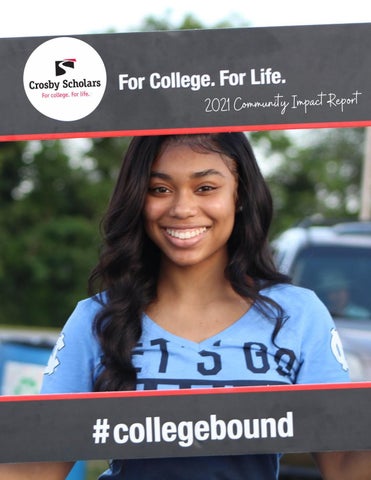 Senior Honors Gala at The Drive, May 2021

together As Crosby Scholars alumnus Matthew Gambill sorted through some of his old papers, he came across a long-ago letter from Mona Lovett, Crosby Scholars President and CEO, that he had received while he was in college.

“I decided now would be the time to give back,” Gambill said. “As I’ve gotten older and more established, I reflect on the opportunities and experiences that have played a part in my success. College is a big factor in that success. Knowing from first-hand experience that the money I donate will get to deserving young people going to college was my inspiration to contribute.” Mat th

Matthew graduated in 2002 from the University of North Carolina at Charlotte with a computer science degree. He is now a Senior Software Developer, contracting at Eastdil Secured. The married father of three is beginning the college enrollment process again, this time as a parent. His oldest son, Christion will be a freshman at Longwood University in the fall. His daughter Victoria, a rising senior who is graduating early, is taking classes at Harvard University and interning at UNC Charlotte.

“When you first go to college there are so many extra expenses, things you don’t realize you need, especially the first year,” he said. “Coming from a single-parent household, every bit helps. At the time $500 was much more than it is today.”

As I’ve gotten older and more established, I reflect on the opportunities and experiences that have played a part in my success. College is a big factor in that success.

The letter brought back memories from 1998 when he graduated from West Forsyth High School and received a $500 scholarship from Crosby Scholars to go towards his college tuition. The memory inspired him to begin making regular, generous donations to Crosby Scholars.

“My youngest son, Parker, was advanced to his 3’s class a month ahead of schedule because he was already potty trained,” the proud father added with a smile.

matters Don Flow, President and CEO of Flow Automotive Companies, says expectations in the job market have changed and explains why supporting Crosby Scholars is more important than ever. “Post high school education is the single best predictor of social and economic mobility and stability,” said Flow, a community leader and visionary for Winston-Salem. “Associate degree holders earn $350,000 more than high school graduates over their lifetime, and that difference lifts someone out of economic instability and financial anxiety. Four-year college graduates earn $1.2 million more over their lifetime.&quot;

Crosby Scholars connects students to their community through its requirement for

He explains that traditional skills jobs that paid well now often require post-secondary education. “Today, it is very difficult for a person to become an automotive technician without an associate’s degree,” he said. “The same is the case in every other skilled technical job. Additionally, accessing non-technical jobs that provide a middle-class income opportunity are just not an option without a college education.”

“Engaging with students in the community helps form them as active citizens who believe they can contribute and make a difference,” Flow said. “Every person gets up in the morning and wants what they do to matter. The students that get involved in the community through Crosby Scholars develop the confidence that they can make a difference, that their lives matter, and that they can help shape a community. If you want to create the citizens who are going to lead this city and beyond in a positive manner, support Crosby Scholars.”

community service, and Flow says that lessons students learn from these experiences are significant.

Crosby Scholars is available to every 6th- to 12th-grade Forsyth County public school student who enrolls and completes annual requirements, and the resulting diversity benefits everyone. “Crosby Scholars enables students to develop friendships beyond their normal boundaries which prepares them for life,” Flow said.

“The richness of life is found in developing friendships that cross boundaries…The future leaders of our country and our community will have to do this if we are going to flourish.”

Salem to be a community of opportunity, support Crosby Scholars.

...If you want to say that the zip code in

*Financial contribution from Goodwill of NWNC is per the 2012 affiliation agreement with Crosby Scholars Community Partnership.

Through Crosby Scholars Leadership Council I aim to spread awareness among students that each one of them is capable of achieving success. I like to spread the word how Crosby Scholars exposes us to opportunities that we may be unable to access on our own. - Ari, Hanes Magnet School

A look at the impact YOU have made this year to ensure every public school student in Forsyth County has the opportunity to attend college!