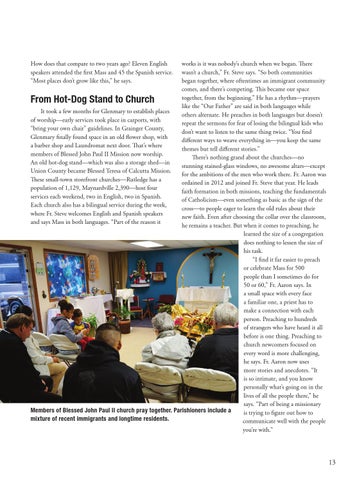 How does that compare to two years ago? Eleven English speakers attended the first Mass and 45 the Spanish service. “Most places don’t grow like this,” he says.

works is it was nobody’s church when we began. There wasn’t a church,” Fr. Steve says. “So both communities began together, where oftentimes an immigrant community comes, and there’s competing. This became our space together, from the beginning.” He has a rhythm—prayers like the “Our Father” are said in both languages while It took a few months for Glenmary to establish places others alternate. He preaches in both languages but doesn’t of worship—early services took place in carports, with repeat the sermons for fear of losing the bilingual kids who “bring your own chair” guidelines. In Grainger County, don’t want to listen to the same thing twice. “You find Glenmary finally found space in an old flower shop, with different ways to weave everything in—you keep the same a barber shop and Laundromat next door. That’s where themes but tell different stories.” members of Blessed John Paul II Mission now worship. There’s nothing grand about the churches—no An old hot-dog stand—which was also a storage shed—in stunning stained-glass windows, no awesome altars—except Union County became Blessed Teresa of Calcutta Mission. for the ambitions of the men who work there. Fr. Aaron was These small-town storefront churches—Rutledge has a ordained in 2012 and joined Fr. Steve that year. He leads population of 1,129, Maynardville 2,390—host four faith formation in both missions, teaching the fundamentals services each weekend, two in English, two in Spanish. of Catholicism—even something as basic as the sign of the Each church also has a bilingual service during the week, cross—to people eager to learn the old rules about their where Fr. Steve welcomes English and Spanish speakers new faith. Even after choosing the collar over the classroom, and says Mass in both languages. “Part of the reason it he remains a teacher. But when it comes to preaching, he learned the size of a congregation does nothing to lessen the size of his task. “I find it far easier to preach or celebrate Mass for 500 people than I sometimes do for 50 or 60,” Fr. Aaron says. In a small space with every face a familiar one, a priest has to make a connection with each person. Preaching to hundreds of strangers who have heard it all before is one thing. Preaching to church newcomers focused on every word is more challenging, he says. Fr. Aaron now uses more stories and anecdotes. “It is so intimate, and you know personally what’s going on in the lives of all the people there,” he says. “Part of being a missionary Members of Blessed John Paul II church pray together. Parishioners include a is trying to figure out how to mixture of recent immigrants and longtime residents. communicate well with the people you’re with.”

From Hot-Dog Stand to Church