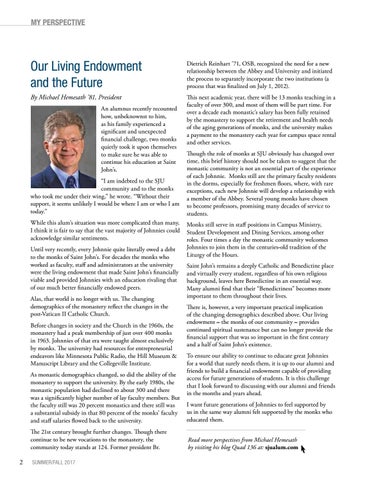 Our Living Endowment and the Future

Dietrich Reinhart ’71, OSB, recognized the need for a new relationship between the Abbey and University and initiated the process to separately incorporate the two institutions (a process that was finalized on July 1, 2012).

This next academic year, there will be 13 monks teaching in a faculty of over 300, and most of them will be part time. For over a decade each monastic’s salary has been fully retained by the monastery to support the retirement and health needs of the aging generations of monks, and the university makes a payment to the monastery each year for campus space rental and other services.

An alumnus recently recounted how, unbeknownst to him, as his family experienced a significant and unexpected financial challenge, two monks quietly took it upon themselves to make sure he was able to continue his education at Saint John’s. “I am indebted to the SJU community and to the monks who took me under their wing,” he wrote. “Without their support, it seems unlikely I would be where I am or who I am today.” While this alum’s situation was more complicated than many, I think it is fair to say that the vast majority of Johnnies could acknowledge similar sentiments. Until very recently, every Johnnie quite literally owed a debt to the monks of Saint John’s. For decades the monks who worked as faculty, staff and administrators at the university were the living endowment that made Saint John’s financially viable and provided Johnnies with an education rivaling that of our much better financially endowed peers. Alas, that world is no longer with us. The changing demographics of the monastery reflect the changes in the post-Vatican II Catholic Church. Before changes in society and the Church in the 1960s, the monastery had a peak membership of just over 400 monks in 1963. Johnnies of that era were taught almost exclusively by monks. The university had resources for entrepreneurial endeavors like Minnesota Public Radio, the Hill Museum &amp; Manuscript Library and the Collegeville Institute. As monastic demographics changed, so did the ability of the monastery to support the university. By the early 1980s, the monastic population had declined to about 300 and there was a significantly higher number of lay faculty members. But the faculty still was 20 percent monastics and there still was a substantial subsidy in that 80 percent of the monks’ faculty and staff salaries flowed back to the university. The 21st century brought further changes. Though there continue to be new vocations to the monastery, the community today stands at 124. Former president Br.

Though the role of monks at SJU obviously has changed over time, this brief history should not be taken to suggest that the monastic community is not an essential part of the experience of each Johnnie. Monks still are the primary faculty residents in the dorms, especially for freshmen floors, where, with rare exceptions, each new Johnnie will develop a relationship with a member of the Abbey. Several young monks have chosen to become professors, promising many decades of service to students. Monks still serve in staff positions in Campus Ministry, Student Development and Dining Services, among other roles. Four times a day the monastic community welcomes Johnnies to join them in the centuries-old tradition of the Liturgy of the Hours. Saint John’s remains a deeply Catholic and Benedictine place and virtually every student, regardless of his own religious background, leaves here Benedictine in an essential way. Many alumni find that their “Benedictiness” becomes more important to them throughout their lives. There is, however, a very important practical implication of the changing demographics described above. Our living endowment – the monks of our community – provides continued spiritual sustenance but can no longer provide the financial support that was so important in the first century and a half of Saint John’s existence. To ensure our ability to continue to educate great Johnnies for a world that surely needs them, it is up to our alumni and friends to build a financial endowment capable of providing access for future generations of students. It is this challenge that I look forward to discussing with our alumni and friends in the months and years ahead. I want future generations of Johnnies to feel supported by us in the same way alumni felt supported by the monks who educated them. Read more perspectives from Michael Hemesath by visiting his blog Quad 136 at: sjualum.com