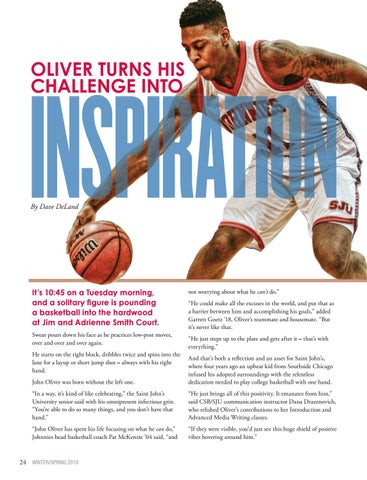 OLIVER TURNS HIS CHALLENGE INTO

It’s 10:45 on a Tuesday morning, and a solitary figure is pounding a basketball into the hardwood at Jim and Adrienne Smith Court. Sweat pours down his face as he practices low-post moves, over and over and over again. He starts on the right block, dribbles twice and spins into the lane for a layup or short jump shot – always with his right hand.

not worrying about what he can’t do.” “He could make all the excuses in the world, and put that as a barrier between him and accomplishing his goals,” added Garrett Goetz ’18, Oliver’s teammate and housemate. “But it’s never like that. “He just steps up to the plate and gets after it – that’s with everything.”

John Oliver was born without the left one.

And that’s both a reflection and an asset for Saint John’s, where four years ago an upbeat kid from Southside Chicago infused his adopted surroundings with the relentless dedication needed to play college basketball with one hand.

“In a way, it’s kind of like celebrating,” the Saint John’s University senior said with his omnipresent infectious grin. “You’re able to do so many things, and you don’t have that hand.”

“He just brings all of this positivity. It emanates from him,” said CSB/SJU communication instructor Dana Drazenovich, who relished Oliver’s contributions to her Introduction and Advanced Media Writing classes.

“John Oliver has spent his life focusing on what he can do,” Johnnies head basketball coach Pat McKenzie ’04 said, “and

“If they were visible, you’d just see this huge shield of positive vibes hovering around him.”