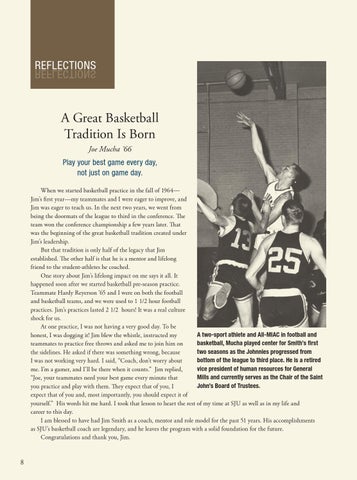 A Great Basketball Tradition Is Born Joe Mucha ’66 Play your best game every day, not just on game day. When we started basketball practice in the fall of 1964— Jim’s first year—my teammates and I were eager to improve, and Jim was eager to teach us. In the next two years, we went from being the doormats of the league to third in the conference. The team won the conference championship a few years later. That was the beginning of the great basketball tradition created under Jim’s leadership. But that tradition is only half of the legacy that Jim established. The other half is that he is a mentor and lifelong friend to the student-athletes he coached. One story about Jim’s lifelong impact on me says it all. It happened soon after we started basketball pre-season practice. Teammate Hardy Reyerson ’65 and I were on both the football and basketball teams, and we were used to 1 1/2 hour football practices. Jim’s practices lasted 2 1/2 hours! It was a real culture shock for us. At one practice, I was not having a very good day. To be A two-sport athlete and All-MIAC in football and honest, I was dogging it! Jim blew the whistle, instructed my basketball, Mucha played center for Smith’s first teammates to practice free throws and asked me to join him on two seasons as the Johnnies progressed from the sidelines. He asked if there was something wrong, because bottom of the league to third place. He is a retired I was not working very hard. I said, “Coach, don’t worry about vice president of human resources for General me. I’m a gamer, and I’ll be there when it counts.” Jim replied, Mills and currently serves as the Chair of the Saint “Joe, your teammates need your best game every minute that John’s Board of Trustees. you practice and play with them. They expect that of you, I expect that of you and, most importantly, you should expect it of yourself.” His words hit me hard. I took that lesson to heart the rest of my time at SJU as well as in my life and career to this day. I am blessed to have had Jim Smith as a coach, mentor and role model for the past 51 years. His accomplishments as SJU’s basketball coach are legendary, and he leaves the program with a solid foundation for the future. Congratulations and thank you, Jim.