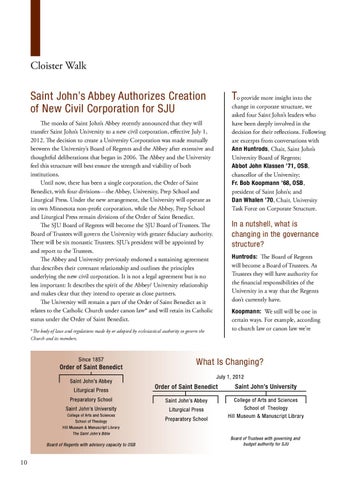 Saint John’s Abbey Authorizes Creation of New Civil Corporation for SJU The monks of Saint John’s Abbey recently announced that they will transfer Saint John’s University to a new civil corporation, effective July 1, 2012. The decision to create a University Corporation was made mutually between the University’s Board of Regents and the Abbey after extensive and thoughtful deliberations that began in 2006. The Abbey and the University feel this structure will best ensure the strength and viability of both institutions. Until now, there has been a single corporation, the Order of Saint Benedict, with four divisions—the Abbey, University, Prep School and Liturgical Press. Under the new arrangement, the University will operate as its own Minnesota non-profit corporation, while the Abbey, Prep School and Liturgical Press remain divisions of the Order of Saint Benedict. The SJU Board of Regents will become the SJU Board of Trustees. The Board of Trustees will govern the University with greater fiduciary authority. There will be six monastic Trustees. SJU’s president will be appointed by and report to the Trustees. The Abbey and University previously endorsed a sustaining agreement that describes their covenant relationship and outlines the principles underlying the new civil corporation. It is not a legal agreement but is no less important: It describes the spirit of the Abbey/ University relationship and makes clear that they intend to operate as close partners. The University will remain a part of the Order of Saint Benedict as it relates to the Catholic Church under canon law* and will retain its Catholic status under the Order of Saint Benedict. *The body of laws and regulations made by or adopted by ecclesiastical authority to govern the Church and its members.

o provide more insight into the change in corporate structure, we asked four Saint John’s leaders who have been deeply involved in the decision for their reflections. Following are excerpts from conversations with Ann Huntrods, Chair, Saint John’s University Board of Regents; Abbot John Klassen ’71, OSB, chancellor of the University; Fr. Bob Koopmann ’68, OSB, president of Saint John’s; and Dan Whalen ’70, Chair, University Task Force on Corporate Structure.

In a nutshell, what is changing in the governance structure? Huntrods: The Board of Regents will become a Board of Trustees. As Trustees they will have authority for the financial responsibilities of the University in a way that the Regents don’t currently have. Koopmann: We still will be one in certain ways. For example, according to church law or canon law we’re

still one organization, we’re one person. But according to civil law, the University steps out as a separate non-profit corporation. That’s the basic difference. Whalen: The mission of running the university will be transferred from the Order of Saint Benedict to the University and its Trustees and management, principally the president. Klassen: The Trustees will have complete authority to approve and devise budgets. They’ll have a stronger and clearer link to the curriculum of the University. The Abbey, for its part, has a clearer line of commitment to the Catholic and Benedictine identity of Saint John’s University.

Why is the new structure good for the Abbey and University? Klassen: From the Abbey side, I think we are going to find that we have a lot of energy released because we’ve eliminated some of the redundancy. We can attend to issues around making sure that we have a really good strong campus ministry for our students and our increasingly diverse student body. Secondly, that we have the right energy and people for the faculty resident program, that we’re doing a good job of getting our monks

ready to teach in the University and to lead the University. Those are areas that, in fact, we as a monastery care about deeply. We want to have a strong future in relationship to the University by participating at all of those levels.

of the relationship, and in my view, it’s even more important than the new civil corporation.

Huntrods: The advantage to the University is that the new Trustees will have clarity about their role and also have a clear sense of their responsibility for the University’s financial affairs.

What will feel different at Saint John’s University and Abbey after July 1, 2012?

Koopmann: Those very Catholic, very Benedictine parts of our ministry that have been so important, especially the faculty resident program—you won’t see any difference. Actually, because it’s so spelled out about who does what, I think you’ll see a strengthening of that program.

Whalen: It’s been drafted and crafted to express the heart and soul of how we intend to live together.

Koopmann: Nothing. When alumni come back to campus they won’t feel anything different, we’ll all be around, those monks who are in the dorms will still be there to greet you. I don’t think you’ll find any difference at all.

Whalen: It means that those who choose to be Trustees and whoever chooses to be president of this great University are fully responsible for its destiny, and that’s a very good thing.

Whalen: What will be different for alumni and students is probably nothing. I wouldn’t expect people to see any change at all. The phones will be answered the same way, there will be the same people working here. The sun will still rise in the east and set in the west. A lot of these things are just not going to change.

Why is the sustaining agreement important?

To read the Sustaining Agreement, go to csbsju.edu/Regents.htm.

Huntrods: Because it lays out in a clear way how the University and the Abbey can maintain and grow the great and deep relationship that they currently have. It’s a fundamental agreement that talks about the spirit