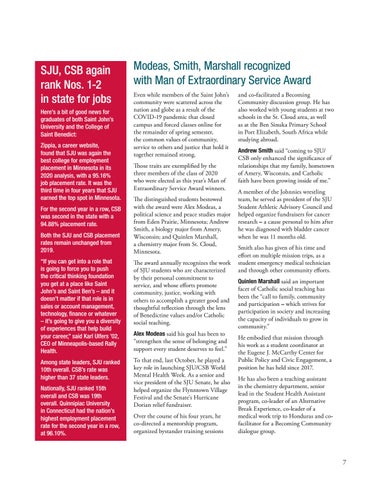 SJU, CSB again rank Nos. 1-2 in state for jobs Here’s a bit of good news for graduates of both Saint John’s University and the College of Saint Benedict: Zippia, a career website, found that SJU was again the best college for employment placement in Minnesota in its 2020 analysis, with a 95.16% job placement rate. It was the third time in four years that SJU earned the top spot in Minnesota. For the second year in a row, CSB was second in the state with a 94.88% placement rate. Both the SJU and CSB placement rates remain unchanged from 2019.

Modeas, Smith, Marshall recognized with Man of Extraordinary Service Award Even while members of the Saint John’s community were scattered across the nation and globe as a result of the COVID-19 pandemic that closed campus and forced classes online for the remainder of spring semester, the common values of community, service to others and justice that hold it together remained strong. Those traits are exemplified by the three members of the class of 2020 who were elected as this year’s Man of Extraordinary Service Award winners. The distinguished students bestowed with the award were Alex Modeas, a political science and peace studies major from Eden Prairie, Minnesota; Andrew Smith, a biology major from Amery, Wisconsin; and Quinlen Marshall, a chemistry major from St. Cloud, Minnesota.

“If you can get into a role that is going to force you to push the critical thinking foundation you get at a place like Saint John’s and Saint Ben’s – and it doesn’t matter if that role is in sales or account management, technology, finance or whatever – it’s going to give you a diversity of experiences that help build your career,” said Karl Ulfers ’02, CEO of Minneapolis-based Rally Health.

The award annually recognizes the work of SJU students who are characterized by their personal commitment to service, and whose efforts promote community, justice, working with others to accomplish a greater good and thoughtful reflection through the lens of Benedictine values and/or Catholic social teaching.

To that end, last October, he played a key role in launching SJU/CSB World Mental Health Week. As a senior and vice president of the SJU Senate, he also helped organize the Flynntown Village Festival and the Senate’s Hurricane Dorian relief fundraiser.

Nationally, SJU ranked 15th overall and CSB was 19th overall. Quinnipiac University in Connecticut had the nation’s highest employment placement rate for the second year in a row, at 96.10%.

Alex Modeas said his goal has been to “strengthen the sense of belonging and support every student deserves to feel.”

Over the course of his four years, he co-directed a mentorship program, organized bystander training sessions

and co-facilitated a Becoming Community discussion group. He has also worked with young students at two schools in the St. Cloud area, as well as at the Ben Sinuka Primary School in Port Elizabeth, South Africa while studying abroad. Andrew Smith said “coming to SJU/ CSB only enhanced the significance of relationships that my family, hometown of Amery, Wisconsin, and Catholic faith have been growing inside of me.” A member of the Johnnies wrestling team, he served as president of the SJU Student Athletic Advisory Council and helped organize fundraisers for cancer research – a cause personal to him after he was diagnosed with bladder cancer when he was 11 months old. Smith also has given of his time and effort on multiple mission trips, as a student emergency medical technician and through other community efforts. Quinlen Marshall said an important facet of Catholic social teaching has been the “call to family, community and participation – which strives for participation in society and increasing the capacity of individuals to grow in community.” He embodied that mission through his work as a student coordinator at the Eugene J. McCarthy Center for Public Policy and Civic Engagement, a position he has held since 2017. He has also been a teaching assistant in the chemistry department, senior lead in the Student Health Assistant program, co-leader of an Alternative Break Experience, co-leader of a medical work trip to Honduras and cofacilitator for a Becoming Community dialogue group.