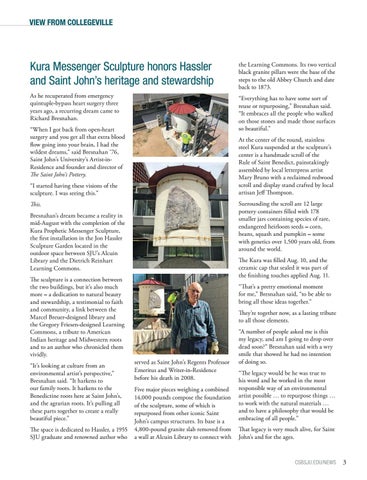 the Learning Commons. Its two vertical black granite pillars were the base of the steps to the old Abbey Church and date back to 1873.

As he recuperated from emergency quintuple-bypass heart surgery three years ago, a recurring dream came to Richard Bresnahan.

“Everything has to have some sort of reuse or repurposing,” Bresnahan said. “It embraces all the people who walked on those stones and made those surfaces so beautiful.”

“When I got back from open-heart surgery and you get all that extra blood flow going into your brain, I had the wildest dreams,” said Bresnahan ’76, Saint John’s University’s Artist-inResidence and founder and director of The Saint John’s Pottery.

At the center of the round, stainless steel Kura suspended at the sculpture’s center is a handmade scroll of the Rule of Saint Benedict, painstakingly assembled by local letterpress artist Mary Bruno with a reclaimed redwood scroll and display stand crafted by local artisan Jeff Thompson.

“I started having these visions of the sculpture. I was seeing this.”

Surrounding the scroll are 12 large pottery containers filled with 178 smaller jars containing species of rare, endangered heirloom seeds – corn, beans, squash and pumpkin – some with genetics over 1,500 years old, from around the world.

This. Bresnahan’s dream became a reality in mid-August with the completion of the Kura Prophetic Messenger Sculpture, the first installation in the Jon Hassler Sculpture Garden located in the outdoor space between SJU’s Alcuin Library and the Dietrich Reinhart Learning Commons. The sculpture is a connection between the two buildings, but it’s also much more – a dedication to natural beauty and stewardship, a testimonial to faith and community, a link between the Marcel Breuer-designed library and the Gregory Friesen-designed Learning Commons, a tribute to American Indian heritage and Midwestern roots and to an author who chronicled them vividly. “It’s looking at culture from an environmental artist’s perspective,” Bresnahan said. “It harkens to our family roots. It harkens to the Benedictine roots here at Saint John’s, and the agrarian roots. It’s pulling all these parts together to create a really beautiful piece.” The space is dedicated to Hassler, a 1955 SJU graduate and renowned author who

The Kura was filled Aug. 10, and the ceramic cap that sealed it was part of the finishing touches applied Aug. 11. “That’s a pretty emotional moment for me,” Bresnahan said, “to be able to bring all those ideas together.” They’re together now, as a lasting tribute to all those elements.

served as Saint John’s Regents Professor Emeritus and Writer-in-Residence before his death in 2008. Five major pieces weighing a combined 14,000 pounds compose the foundation of the sculpture, some of which is repurposed from other iconic Saint John’s campus structures. Its base is a 4,800-pound granite slab removed from a wall at Alcuin Library to connect with

“A number of people asked me is this my legacy, and am I going to drop over dead soon?” Bresnahan said with a wry smile that showed he had no intention of doing so. “The legacy would be he was true to his word and he worked in the most responsible way of an environmental artist possible … to repurpose things … to work with the natural materials … and to have a philosophy that would be embracing of all people.” That legacy is very much alive, for Saint John’s and for the ages.