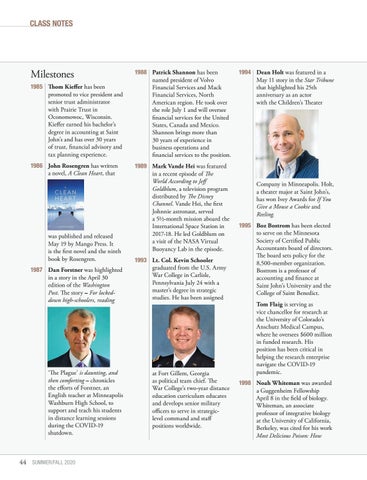 Milestones 1985 Thom Kieffer has been promoted to vice president and senior trust administrator with Prairie Trust in Oconomowoc, Wisconsin. Kieffer earned his bachelor’s degree in accounting at Saint John’s and has over 30 years of trust, financial advisory and tax planning experience. 1986 John Rosengren has written a novel, A Clean Heart, that

was published and released May 19 by Mango Press. It is the first novel and the ninth book by Rosengren. 1987 Dan Forstner was highlighted in a story in the April 30 edition of the Washington Post. The story – For lockeddown high-schoolers, reading

‘The Plague’ is daunting, and then comforting – chronicles the efforts of Forstner, an English teacher at Minneapolis Washburn High School, to support and teach his students in distance learning sessions during the COVID-19 shutdown.

1988 Patrick Shannon has been named president of Volvo Financial Services and Mack Financial Services, North American region. He took over the role July 1 and will oversee financial services for the United States, Canada and Mexico. Shannon brings more than 30 years of experience in business operations and financial services to the position. 1989 Mark Vande Hei was featured in a recent episode of The World According to Jeff Goldblum, a television program distributed by The Disney Channel. Vande Hei, the first Johnnie astronaut, served a 5½-month mission aboard the International Space Station in 2017-18. He led Goldblum on a visit of the NASA Virtual Buoyancy Lab in the episode. 1993 Lt. Col. Kevin Schooler graduated from the U.S. Army War College in Carlisle, Pennsylvania July 24 with a master’s degree in strategic studies. He has been assigned

Company in Minneapolis. Holt, a theater major at Saint John’s, has won Ivey Awards for If You Give a Mouse a Cookie and Reeling. 1995 Boz Bostrom has been elected to serve on the Minnesota Society of Certified Public Accountants board of directors. The board sets policy for the 8,500-member organization. Bostrom is a professor of accounting and finance at Saint John’s University and the College of Saint Benedict. Tom Flaig is serving as vice chancellor for research at the University of Colorado’s Anschutz Medical Campus, where he oversees $600 million in funded research. His position has been critical in helping the research enterprise navigate the COVID-19 pandemic. 1998 Noah Whiteman was awarded a Guggenheim Fellowship April 8 in the field of biology. Whiteman, an associate professor of integrative biology at the University of California, Berkeley, was cited for his work Most Delicious Poison: How