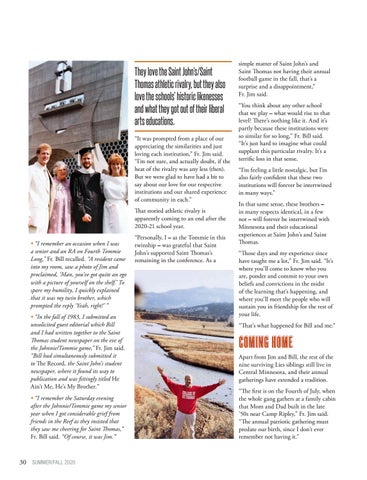 They love the Saint John’s/Saint Thomas athletic rivalry, but they also love the schools’ historic likenesses and what they got out of their liberal arts educations. “It was prompted from a place of our appreciating the similarities and just loving each institution,” Fr. Jim said. “I’m not sure, and actually doubt, if the heat of the rivalry was any less (then). But we were glad to have had a bit to say about our love for our respective institutions and our shared experience of community in each.” That storied athletic rivalry is apparently coming to an end after the 2020-21 school year. • “I remember an occasion when I was a senior and an RA on Fourth Tommie Long,” Fr. Bill recalled. “A resident came into my room, saw a photo of Jim and proclaimed, ‘Man, you’ve got quite an ego with a picture of yourself on the shelf.’ To spare my humility, I quickly explained that it was my twin brother, which prompted the reply ‘Yeah, right!’ ” • “In the fall of 1983, I submitted an unsolicited guest editorial which Bill and I had written together to the Saint Thomas student newspaper on the eve of the Johnnie/Tommie game,” Fr. Jim said. “Bill had simultaneously submitted it to The Record, the Saint John’s student newspaper, where it found its way to publication and was fittingly titled He Ain’t Me, He’s My Brother.” • “I remember the Saturday evening after the Johnnie/Tommie game my senior year when I got considerable grief from friends in the Reef as they insisted that they saw me cheering for Saint Thomas,” Fr. Bill said. “Of course, it was Jim.”

“Personally, I – as the Tommie in this twinship – was grateful that Saint John’s supported Saint Thomas’s remaining in the conference. As a

simple matter of Saint John’s and Saint Thomas not having their annual football game in the fall, that’s a surprise and a disappointment,” Fr. Jim said. “You think about any other school that we play – what would rise to that level? There’s nothing like it. And it’s partly because these institutions were so similar for so long,” Fr. Bill said. “It’s just hard to imagine what could supplant this particular rivalry. It’s a terrific loss in that sense. “I’m feeling a little nostalgic, but I’m also fairly confident that these two institutions will forever be intertwined in many ways.” In that same sense, these brothers – in many respects identical, in a few not – will forever be intertwined with Minnesota and their educational experiences at Saint John’s and Saint Thomas. “Those days and my experience since have taught me a lot,” Fr. Jim said. “It’s where you’ll come to know who you are, ponder and commit to your own beliefs and convictions in the midst of the learning that’s happening, and where you’ll meet the people who will sustain you in friendship for the rest of your life. “That’s what happened for Bill and me.”

COMING HOME Apart from Jim and Bill, the rest of the nine surviving Lies siblings still live in Central Minnesota, and their annual gatherings have extended a tradition. “The first is on the Fourth of July, when the whole gang gathers at a family cabin that Mom and Dad built in the late ’50s near Camp Ripley,” Fr. Jim said. “The annual patriotic gathering must predate our birth, since I don’t ever remember not having it.”