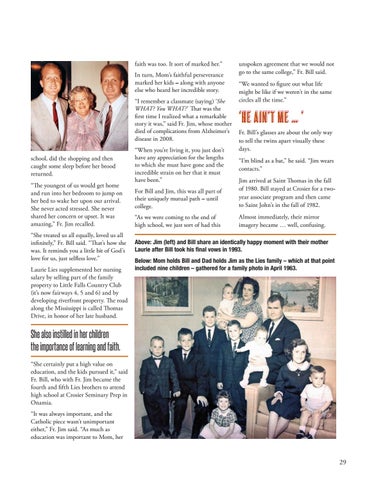 faith was too. It sort of marked her.” In turn, Mom’s faithful perseverance marked her kids – along with anyone else who heard her incredible story. “I remember a classmate (saying) ‘She WHAT? You WHAT?’ That was the first time I realized what a remarkable story it was,” said Fr. Jim, whose mother died of complications from Alzheimer’s disease in 2008. school, did the shopping and then caught some sleep before her brood returned. “The youngest of us would get home and run into her bedroom to jump on her bed to wake her upon our arrival. She never acted stressed. She never shared her concern or upset. It was amazing,” Fr. Jim recalled. “She treated us all equally, loved us all infinitely,” Fr. Bill said. “That’s how she was. It reminds you a little bit of God’s love for us, just selfless love.” Laurie Lies supplemented her nursing salary by selling part of the family property to Little Falls Country Club (it’s now fairways 4, 5 and 6) and by developing riverfront property. The road along the Mississippi is called Thomas Drive, in honor of her late husband.

“When you’re living it, you just don’t have any appreciation for the lengths to which she must have gone and the incredible strain on her that it must have been.”

unspoken agreement that we would not go to the same college,” Fr. Bill said. “We wanted to figure out what life might be like if we weren’t in the same circles all the time.”

‘HE AIN’T ME … ’ Fr. Bill’s glasses are about the only way to tell the twins apart visually these days. “I’m blind as a bat,” he said. “Jim wears contacts.”

For Bill and Jim, this was all part of their uniquely mutual path – until college.

“As we were coming to the end of high school, we just sort of had this

Above: Jim (left) and Bill share an identically happy moment with their mother Laurie after Bill took his final vows in 1993. Below: Mom holds Bill and Dad holds Jim as the Lies family – which at that point included nine children – gathered for a family photo in April 1963.

She also instilled in her children the importance of learning and faith. “She certainly put a high value on education, and the kids pursued it,” said Fr. Bill, who with Fr. Jim became the fourth and fifth Lies brothers to attend high school at Crosier Seminary Prep in Onamia. “It was always important, and the Catholic piece wasn’t unimportant either,” Fr. Jim said. “As much as education was important to Mom, her