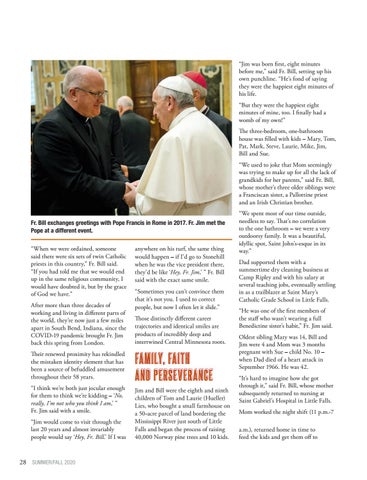 “Jim was born first, eight minutes before me,” said Fr. Bill, setting up his own punchline. “He’s fond of saying they were the happiest eight minutes of his life. “But they were the happiest eight minutes of mine, too. I finally had a womb of my own!” The three-bedroom, one-bathroom house was filled with kids – Mary, Tom, Pat, Mark, Steve, Laurie, Mike, Jim, Bill and Sue. “We used to joke that Mom seemingly was trying to make up for all the lack of grandkids for her parents,” said Fr. Bill, whose mother’s three older siblings were a Franciscan sister, a Pallottine priest and an Irish Christian brother. Fr. Bill exchanges greetings with Pope Francis in Rome in 2017. Fr. Jim met the Pope at a different event. “When we were ordained, someone said there were six sets of twin Catholic priests in this country,” Fr. Bill said. “If you had told me that we would end up in the same religious community, I would have doubted it, but by the grace of God we have.” After more than three decades of working and living in different parts of the world, they’re now just a few miles apart in South Bend, Indiana, since the COVID-19 pandemic brought Fr. Jim back this spring from London.

anywhere on his turf, the same thing would happen – if I’d go to Stonehill when he was the vice president there, they’d be like ‘Hey, Fr. Jim,’ ” Fr. Bill said with the exact same smile. “Sometimes you can’t convince them that it’s not you. I used to correct people, but now I often let it slide.” Those distinctly different career trajectories and identical smiles are products of incredibly deep and intertwined Central Minnesota roots.

Their renewed proximity has rekindled the mistaken identity element that has been a source of befuddled amusement throughout their 58 years.

“I think we’re both just jocular enough for them to think we’re kidding – ‘No, really, I’m not who you think I am,’ ” Fr. Jim said with a smile.

Jim and Bill were the eighth and ninth children of Tom and Laurie (Hueller) Lies, who bought a small farmhouse on a 50-acre parcel of land bordering the Mississippi River just south of Little Falls and began the process of raising 40,000 Norway pine trees and 10 kids.

“Jim would come to visit through the last 20 years and almost invariably people would say ‘Hey, Fr. Bill.’ If I was

“We spent most of our time outside, needless to say. That’s no correlation to the one bathroom – we were a very outdoorsy family. It was a beautiful, idyllic spot, Saint John’s-esque in its way.” Dad supported them with a summertime dry cleaning business at Camp Ripley and with his salary at several teaching jobs, eventually settling in as a trailblazer at Saint Mary’s Catholic Grade School in Little Falls. “He was one of the first members of the staff who wasn’t wearing a full Benedictine sister’s habit,” Fr. Jim said. Oldest sibling Mary was 14, Bill and Jim were 4 and Mom was 3 months pregnant with Sue – child No. 10 – when Dad died of a heart attack in September 1966. He was 42. “It’s hard to imagine how she got through it,” said Fr. Bill, whose mother subsequently returned to nursing at Saint Gabriel’s Hospital in Little Falls. Mom worked the night shift (11 p.m.-7 a.m.), returned home in time to feed the kids and get them off to