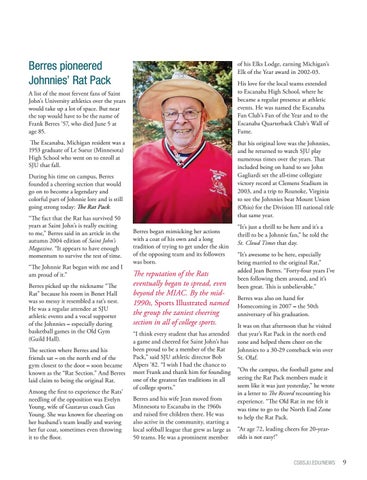 of his Elks Lodge, earning Michigan’s Elk of the Year award in 2002-03. His love for the local teams extended to Escanaba High School, where he became a regular presence at athletic events. He was named the Escanaba Fan Club’s Fan of the Year and to the Escanaba Quarterback Club’s Wall of Fame.

A list of the most fervent fans of Saint John’s University athletics over the years would take up a lot of space. But near the top would have to be the name of Frank Berres ’57, who died June 5 at age 85. The Escanaba, Michigan resident was a 1953 graduate of Le Sueur (Minnesota) High School who went on to enroll at SJU that fall.

But his original love was the Johnnies, and he returned to watch SJU play numerous times over the years. That included being on hand to see John Gagliardi set the all-time collegiate victory record at Clemens Stadium in 2003, and a trip to Roanoke, Virginia to see the Johnnies beat Mount Union (Ohio) for the Division III national title that same year.

During his time on campus, Berres founded a cheering section that would go on to become a legendary and colorful part of Johnnie lore and is still going strong today: The Rat Pack. “The fact that the Rat has survived 50 years at Saint John’s is really exciting to me,” Berres said in an article in the autumn 2004 edition of Saint John’s Magazine. “It appears to have enough momentum to survive the test of time. “The Johnnie Rat began with me and I am proud of it.” Berres picked up the nickname “The Rat” because his room in Benet Hall was so messy it resembled a rat’s nest. He was a regular attendee at SJU athletic events and a vocal supporter of the Johnnies – especially during basketball games in the Old Gym (Guild Hall). The section where Berres and his friends sat – on the north end of the gym closest to the door – soon became known as the “Rat Section.” And Berres laid claim to being the original Rat. Among the first to experience the Rats’ needling of the opposition was Evelyn Young, wife of Gustavus coach Gus Young. She was known for cheering on her husband’s team loudly and waving her fur coat, sometimes even throwing it to the floor.

Berres began mimicking her actions with a coat of his own and a long tradition of trying to get under the skin of the opposing team and its followers was born.

The reputation of the Rats eventually began to spread, even beyond the MIAC. By the mid1990s, Sports Illustrated named the group the zaniest cheering section in all of college sports. “I think every student that has attended a game and cheered for Saint John’s has been proud to be a member of the Rat Pack,” said SJU athletic director Bob Alpers ’82. “I wish I had the chance to meet Frank and thank him for founding one of the greatest fan traditions in all of college sports.” Berres and his wife Jean moved from Minnesota to Escanaba in the 1960s and raised five children there. He was also active in the community, starting a local softball league that grew as large as 50 teams. He was a prominent member

“It’s just a thrill to be here and it’s a thrill to be a Johnnie fan,” he told the St. Cloud Times that day. “It’s awesome to be here, especially being married to the original Rat,” added Jean Berres. “Forty-four years I’ve been following them around, and it’s been great. This is unbelievable.” Berres was also on hand for Homecoming in 2007 – the 50th anniversary of his graduation. It was on that afternoon that he visited that year’s Rat Pack in the north end zone and helped them cheer on the Johnnies to a 30-29 comeback win over St. Olaf. “On the campus, the football game and seeing the Rat Pack members made it seem like it was just yesterday,” he wrote in a letter to The Record recounting his experience. “The Old Rat in me felt it was time to go to the North End Zone to help the Rat Pack. “At age 72, leading cheers for 20-yearolds is not easy!”