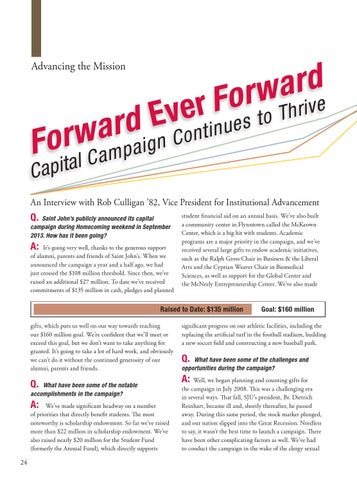 An Interview with Rob Culligan ’82, Vice President for Institutional Advancement

Saint John’s publicly announced its capital campaign during Homecoming weekend in September 2013. How has it been going?

It’s going very well, thanks to the generous support of alumni, parents and friends of Saint John’s. When we announced the campaign a year and a half ago, we had just crossed the $108 million threshold. Since then, we’ve raised an additional $27 million. To date we’ve received commitments of $135 million in cash, pledges and planned

student financial aid on an annual basis. We’ve also built a community center in Flynntown called the McKeown Center, which is a big hit with students. Academic programs are a major priority in the campaign, and we’ve received several large gifts to endow academic initiatives, such as the Ralph Gross Chair in Business &amp; the Liberal Arts and the Cyprian Weaver Chair in Biomedical Sciences, as well as support for the Global Center and the McNeely Entrepreneurship Center. We’ve also made

Raised to Date: $135 million gifts, which puts us well on our way towards reaching our $160 million goal. We’re confident that we’ll meet or exceed this goal, but we don’t want to take anything for granted. It’s going to take a lot of hard work, and obviously we can’t do it without the continued generosity of our alumni, parents and friends.

significant progress on our athletic facilities, including the replacing the artificial turf in the football stadium, building a new soccer field and constructing a new baseball park.

Well, we began planning and counting gifts for the campaign in July 2008. This was a challenging era in several ways. That fall, SJU’s president, Br. Dietrich Reinhart, became ill and, shortly thereafter, he passed away. During this same period, the stock market plunged, and our nation slipped into the Great Recession. Needless to say, it wasn’t the best time to launch a campaign. There have been other complicating factors as well. We’ve had to conduct the campaign in the wake of the clergy sexual

What have been some of the notable accomplishments in the campaign?

What have been some of the challenges and opportunities during the campaign?