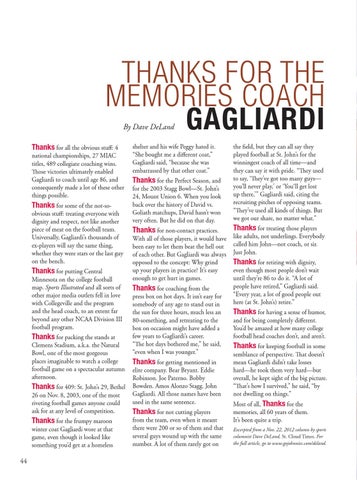 THANKS FOR THE MEMORIES COACH GAGLIARDI By Dave DeLand

Thanks for all the obvious stuff: 4 national championships, 27 MIAC titles, 489 collegiate coaching wins. Those victories ultimately enabled Gagliardi to coach until age 86, and consequently made a lot of these other things possible.

Thanks for some of the not-soobvious stuff: treating everyone with dignity and respect, not like another piece of meat on the football team. Universally, Gagliardi’s thousands of ex-players will say the same thing, whether they were stars or the last guy on the bench.

Thanks for putting Central Minnesota on the college football map. Sports Illustrated and all sorts of other major media outlets fell in love with Collegeville and the program and the head coach, to an extent far beyond any other NCAA Division III football program.

Thanks for packing the stands at Clemens Stadium, a.k.a. the Natural Bowl, one of the most gorgeous places imaginable to watch a college football game on a spectacular autumn afternoon.

Thanks for the frumpy maroon winter coat Gagliardi wore at that game, even though it looked like something you’d get at a homeless

shelter and his wife Peggy hated it. “She bought me a different coat,” Gagliardi said, “because she was embarrassed by that other coat.”

Thanks for the Perfect Season, and for the 2003 Stagg Bowl—St. John’s 24, Mount Union 6. When you look back over the history of David vs. Goliath matchups, David hasn’t won very often. But he did on that day.

the field, but they can all say they played football at St. John’s for the winningest coach of all time—and they can say it with pride. “They used to say, ‘They’ve got too many guys— you’ll never play,’ or ‘You‘ll get lost up there,’” Gagliardi said, citing the recruiting pitches of opposing teams. “They’ve used all kinds of things. But we got our share, no matter what.”

Thanks for non-contact practices.

Thanks for treating those players

With all of those players, it would have been easy to let them beat the hell out of each other. But Gagliardi was always opposed to the concept: Why grind up your players in practice? It’s easy enough to get hurt in games.

Thanks for retiring with dignity,

Thanks for coaching from the press box on hot days. It isn’t easy for somebody of any age to stand out in the sun for three hours, much less an 80-something, and retreating to the box on occasion might have added a few years to Gagliardi’s career. “The hot days bothered me,” he said, “even when I was younger.”

Thanks for getting mentioned in elite company. Bear Bryant. Eddie Robinson. Joe Paterno. Bobby Bowden. Amos Alonzo Stagg. John Gagliardi. All those names have been used in the same sentence.

Thanks for not cutting players from the team, even when it meant there were 200 or so of them and that several guys wound up with the same number. A lot of them rarely got on

like adults, not underlings. Everybody called him John—not coach, or sir. Just John. even though most people don’t wait until they’re 86 to do it. “A lot of people have retired,” Gagliardi said. “Every year, a lot of good people out here (at St. John’s) retire.”

Thanks for having a sense of humor, and for being completely different. You’d be amazed at how many college football head coaches don’t, and aren’t.

Thanks for keeping football in some semblance of perspective. That doesn’t mean Gagliardi didn’t take losses hard—he took them very hard—but overall, he kept sight of the big picture. “That’s how I survived,” he said, “by not dwelling on things.” Most of all, Thanks for the memories, all 60 years of them. It’s been quite a trip. Excerpted from a Nov. 22, 2012 column by sports columnist Dave DeLand, St. Cloud Times. For the full article, go to www.gojohnnies.com/deland.