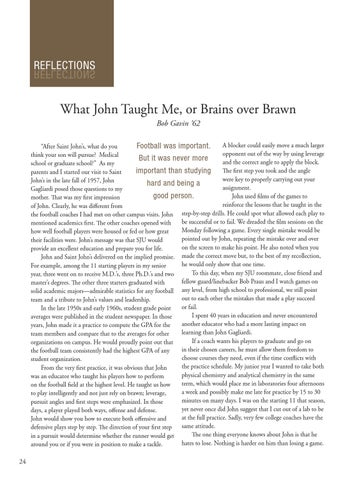 What John Taught Me, or Brains over Brawn Bob Gavin ’62 A blocker could easily move a much larger Football was important. “After Saint John’s, what do you opponent out of the way by using leverage think your son will pursue? Medical But it was never more and the correct angle to apply the block. school or graduate school?” As my important than studying The first step you took and the angle parents and I started our visit to Saint were key to properly carrying out your John’s in the late fall of 1957, John hard and being a assignment. Gagliardi posed those questions to my good person. John used films of the games to mother. That was my first impression reinforce the lessons that he taught in the of John. Clearly, he was different from step-by-step drills. He could spot what allowed each play to the football coaches I had met on other campus visits. John be successful or to fail. We dreaded the film sessions on the mentioned academics first. The other coaches opened with Monday following a game. Every single mistake would be how well football players were housed or fed or how great pointed out by John, repeating the mistake over and over their facilities were. John’s message was that SJU would on the screen to make his point. He also noted when you provide an excellent education and prepare you for life. John and Saint John’s delivered on the implied promise. made the correct move but, to the best of my recollection, he would only show that one time. For example, among the 11 starting players in my senior To this day, when my SJU roommate, close friend and year, three went on to receive M.D.’s, three Ph.D.’s and two fellow guard/linebacker Bob Praus and I watch games on master’s degrees. The other three starters graduated with solid academic majors—admirable statistics for any football any level, from high school to professional, we still point out to each other the mistakes that made a play succeed team and a tribute to John’s values and leadership. or fail. In the late 1950s and early 1960s, student grade point I spent 40 years in education and never encountered averages were published in the student newspaper. In those another educator who had a more lasting impact on years, John made it a practice to compute the GPA for the learning than John Gagliardi. team members and compare that to the averages for other If a coach wants his players to graduate and go on organizations on campus. He would proudly point out that in their chosen careers, he must allow them freedom to the football team consistently had the highest GPA of any choose courses they need, even if the time conflicts with student organization. the practice schedule. My junior year I wanted to take both From the very first practice, it was obvious that John physical chemistry and analytical chemistry in the same was an educator who taught his players how to perform term, which would place me in laboratories four afternoons on the football field at the highest level. He taught us how a week and possibly make me late for practice by 15 to 30 to play intelligently and not just rely on brawn; leverage, minutes on many days. I was on the starting 11 that season, pursuit angles and first steps were emphasized. In those yet never once did John suggest that I cut out of a lab to be days, a player played both ways, offense and defense. at the full practice. Sadly, very few college coaches have the John would show you how to execute both offensive and same attitude. defensive plays step by step. The direction of your first step The one thing everyone knows about John is that he in a pursuit would determine whether the runner would get hates to lose. Nothing is harder on him than losing a game. around you or if you were in position to make a tackle.